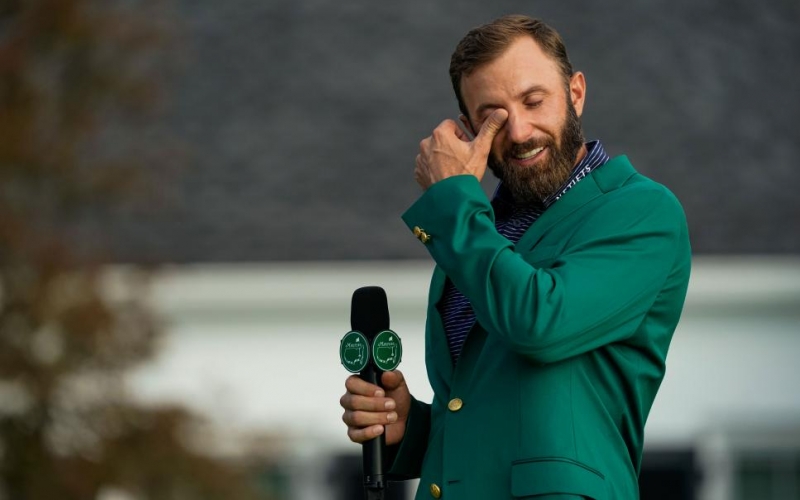 By Alex Myers
Hopefully, you didn’t switch away from CBS to watch football (or something else) as soon as Tiger Woods slipped the green jacket on Dustin Johnson. You may have missed the best part of Masters Sunday.

In case you did, though, don’t worry. We’ve got you covered.

Shortly after the newly minted Masters champ emerged from the Butler Cabin ceremony, he made his way back to the 18th green for an interview with CBS’ Amanda Balionis. And it was there that he totally lost it. No, seriously.

Johnson famously doesn’t display much emotion on the golf course and tapping in his par on the last hole for a five-shot win at Augusta National seemed to be more of the same. His caddie and brother, Austin, cried. His fiancée, Paulina Gretzky, cried. But Johnson remained stoic. Until this:

Winning the Masters is a dream come true for Dustin Johnson. pic.twitter.com/2gGJ9HuMSJ

Wow. At that point, Balionis threw it back to Jim Nantz, who said, “Well, I think that’s one of the greatest things I’ve ever seen right there.”

Like us, we’re pretty sure Jim didn’t see that coming from DJ. But yeah, we agree. That was awesome.

MORE MASTERS 2020 STORIES FROM GOLF DIGEST:
• These photos tell the story of Sunday at Augusta National
• Dustin Johnson’s laid-back vibe is perfect answer to muted Masters
• Dustin Johnson’s play in 2020 redefines his golf legacy
• The 9 records Dustin Johnson broke or tied at Augusta National
• Cameron Smith makes Augusta history and still doesn’t get a green jacket
• How Tiger Woods turned a 10 and a 76 into an inspiring performance
• Tiger Woods just had the worst hole of his career with a 10 (Yes, TEN) on No. 12