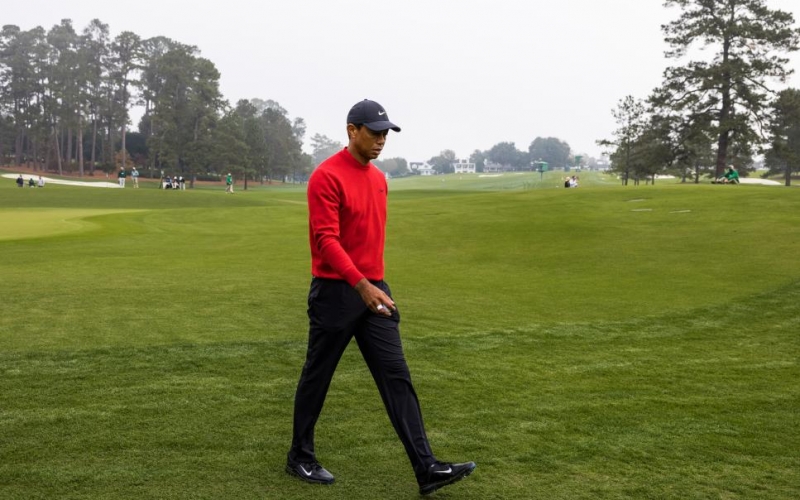 By Daniel Rapaport
AUGUSTA, Ga.—It’s hard not to be romantic about the Masters. Narratives rule all in this business, and more than any other sporting venue, Augusta National seems a willing participant. It co-authors storylines. Jack raises his fist one last time. Phil gets the monkey off his back. Tiger pulls off the unlikeliest of comebacks at the place where it all started.

There is, however, a flip side to this. Everything feels more important at Augusta. Not just the good stuff. The triumphs are amplified, but so are the failures.

In one sense, Tiger Woods failed as he never has before on Sunday, making a septuple-bogey 10 at the par-3 12th. It was hard to watch and even harder to type. He shot four-over 76, and that came despite playing his last six holes in five-under-par. More on that finish in just a second.

“I hit a few more shots than I wanted to today,” Woods said, “and I will not have the chairman be putting the green jacket on me. I’ll be passing it on.”

About 12—we won’t get into the cringeworthy details, but there were three balls in the water. It’s not just the highest one-hole score he’s ever made in the Masters, it’s the worst of his entire career. He had played 23,789 holes on the PGA Tour before venturing into double-digits.

And because Augusta has a flair for this sort of thing, it happened on the very hole that flipped the tournament in his favour one year ago, where he watched competitor after competitor dump their balls into Rae’s Creek. The tragic irony of the scene slapped you in the face.

Tiger Woods’ 19-month reign as Masters Champion was always going to end on Sunday. A stiff back and some mediocre play on Saturday guaranteed that. Still, that quagmire at 12—no one expected that. No one wanted to see that. The shots, and his gait in between them. After playing his eighth shot on the hole, Woods searched for the least-painful way to pull himself out of the bunker, considering a few different routes before ultimately using his wedge as a cane.

Before this week, Woods admitted that after Sunday, he may never again be able to bring his green jacket off the property, a privilege saved only for the reigning Masters champion. Translation: He knows he may never win another Masters, or another major. The mind wandered there during that struggle to get out of the 12th-hole bunker. He was a beaten man.

“This sport is awfully lonely sometimes,” Woods said, a striking comment for a man who does his job in front of 10,000 screaming humans. At least in normal years.

“You have to fight it. No one is going to bring you off the mound or call in a sub. You have to fight through it. That’s what makes this game so unique and so difficult mentally. We’ve all been there, unfortunately. Unfortunately, I’ve been there and you just have to turn around and figure out the next shot, and I was able to do that coming home.”

Indeed he was. Woods was nine over for the round as he stepped to the 13th tee. His worst-ever round at the Masters was a third-round 77 in 1995. He was 19. It’s unlikely Woods knew that, but it’s 100% certain that he wasn’t going to let that septuple-bogey go unpunished.

He ripped a high draw around the corner, maybe his best drive of the week, and two-putted for birdie. He burned the edge for another at 14. He then birdied 15, and 16, and 17, and one more for good measure at 18. The 44-year-old with a fused back clawed back to shoot 76, one better than that rail-thin teenager.

Of course, it made not one bit of difference. Not really, anyway. He climbed about 20 spots on the leader board and made himself, say, an extra 30 grand. He’ll still participate in the green jacket ceremony. When he slips the green jacket onto Dustin Johnson’s very broad shoulders, he’ll do so with a smile on his face—a genuine one, because the vile taste from 12 was washed down with five birdies in his last six holes. He’d never done that, by the way. Not at Augusta. One record to forget, one to be proud of.

Woods has, in all likelihood, played his last competitive round of the year. As he’s quick to point out, 2020 was a most unique experience for everyone. Looking just at his golf, it was a wash—nine starts, one top-10, zero victories.

And yet, he finished it with five birdies in six holes. And this is Augusta, so you simply cannot ignore the symbolism of it all. Woods may never win another Masters. He could win 10 more tournaments or he could win zero, and neither would surprise you. But if the last four years and one day have taught us anything, it’s that he will never, ever stop battling until his body won’t let him. And even then, he’ll push just a little bit more.