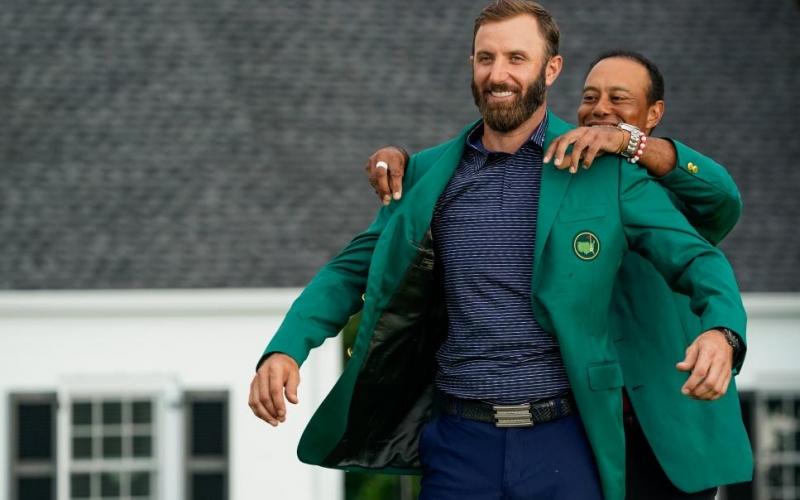 Four days in Augusta is all it takes. Just ask Jack Nicklaus, or Tiger Woods, or Phil Mickelson, or even Sergio Garcia. Winning the Masters doesn’t just come with the green jacket and the lifetime dinner invite—it’s a stamp of approval on a career. Golf’s ultimate prize.

Dustin Johnson didn’t need to win the Masters to become a great golfer. According to the algorithms, he’s been the best player on the planet for 104 total weeks. He’s won $70 million playing this game. Played on four U.S. Ryder Cup teams. Won a major, and a FedEx Cup and, now, 24 events on the PGA Tour, where he has membership for life.

And yet, until Sunday, failure had been an annoyingly large part of the Dustin Johnson experience. The shortcomings. No matter how many Travelers Championships or RBC Canadian Opens or WGC-Bridgestone Invitationals you win, golfers of DJ’s caliber are always going to be judged by how they perform in four tournaments. Yes, he’d won one of them. But he’d also held the 54-hole lead in four others and wound up victorious none of those times—including just three months ago at the PGA Championship in San Francisco, where he was leapfrogged by a 23-year-old playing in just his second major.

RELATED: The 9 records DJ broke or tied at the Masters

Johnson put himself in that position yet again on Saturday, his third-round 65 giving him a four-shot cushion as his head hit the pillow in his Augusta rental home. Sunday could have gone one of two ways. He could have blown a four-shot lead at Augusta National, setting off a hot-take storm and adding yet another chapter to a growingly tragic legacy. The other option was winning. And, in the process, slamming the door shut on that underachieving nonsense. 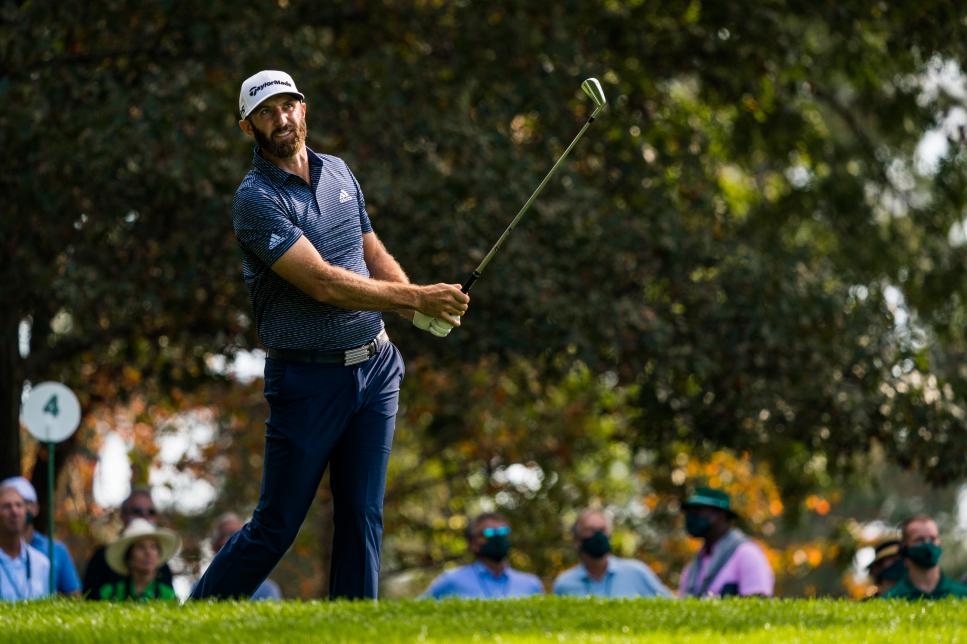 He dominated. After a dicey start—we would say nervy, but it’s still not clear whether Johnson is capable of such a feeling—that saw his lead shrink to a single shot, Johnson carved his way through the last 13 holes, playing them in five under for a 68 and a five-shot victory. His four-day 20-under 268 total broke the all-time Masters scoring record of 270, previously shared by Woods and Jordan Spieth. 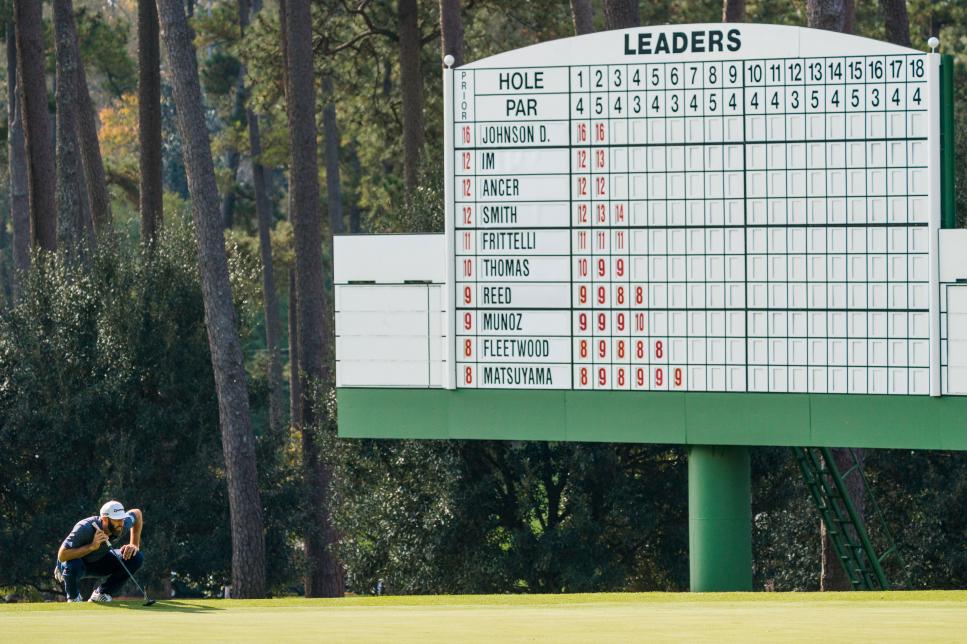 “Obviously the first major’s the hardest,” Johnson said, “but I would say the second one is just as hard. They are all difficult to win. You know, it’s just hard to get it done in a major for some reason.

“I’ve had the lead a couple times and haven’t been able to finish it off, and so it is very nice to have a lead and then play well on Sunday and get the win. I couldn’t be more happy, and I think I look pretty good in green, too.”

RELATED: With victory only weeks out COVID battle, DJ makes another challenge look easier than it is

Johnson was at his swaggering best, reaching that gear where he makes this most complicated game look impossibly straightforward. This was yet another instance of Johnson hitting the open field and putting daylight between himself and the best players in the world.

He does that a lot. Johnson now has seven career victories of at least four shots. In August, he shot 30 under par to win the Northern Trust by 11. He’s won three tournaments in the last three months by a combined 19 shots. Since the PGA Tour’s return after the COVID hiatus, he’s has been by far the best player in the world. He’s now won or finished second in six of his last seven events—the lone outlier, a T-6 at the U.S. Open. And on the macro level, he’s been the game’s most consistent player over the past decade-plus, with a win in all 14 seasons he’s been on the PGA Tour.

“You can definitely tell with the way he was this week, kind of how he’s walking around, how he’s carrying himself that he knew he’s playing really well,” Patrick Reed said. “He knows he has full control over his golf ball and putting really well, and it showed.”

You needed only to see Johnson’s tears on the 18th green to know how important this victory was. This is a man known for being impervious to sentimentality, a man frequently mocked for his simple outlook on golf. See ball, hit ball. On Sunday afternoon, speaking with CBS’ Amanda Balionis, he couldn’t even get a word out.

“On the golf course, I’m pretty good at controlling my emotions, because I’m out playing golf,” Johnson said. “I had a tough time there speaking with Amanda on the putting green, just because it means so much to me. It means so much to my family, Paulina, the kids. They know it’s something that I’ve always been dreaming about and it’s why I work so hard.” 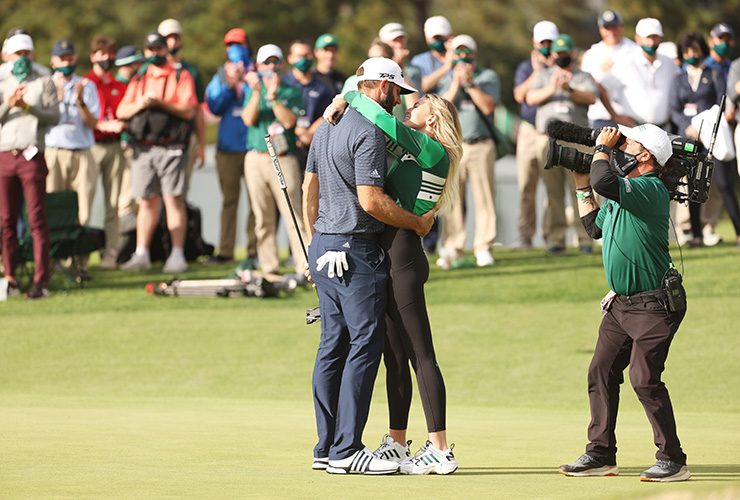 The majors. He dreams about winning majors, and now he’s won two of them. And don’t tell anyone, but he’s halfway to the career Grand Slam, suddenly a distinct possibility. No longer do we have to reconcile “DJ, the PGA Tour player” with “DJ at the majors.” That may seem silly—again, this was just one tournament among the 301 PGA Tour events he’s played in his career—but this is the means that many will judge a career. For better or worse.

Simply put, this was overdue. On Sunday, as Johnson sauntered onto the driving range to begin his warmup, he walked right past Rory McIlroy. They fist-bumped.

MORE MASTERS 2020 STORIES FROM GOLF DIGEST:
• These photos tell the story of Sunday at Augusta National
• Dustin Johnson’s laid-back vibe is perfect answer to muted Masters
• Cameron Smith makes Augusta history and still doesn’t get a green jacket
• How Tiger Woods turned a 10 and a 76 into an inspiring performance
• Tiger Woods just had the worst hole of his career with a 10 (Yes, TEN) on No. 12