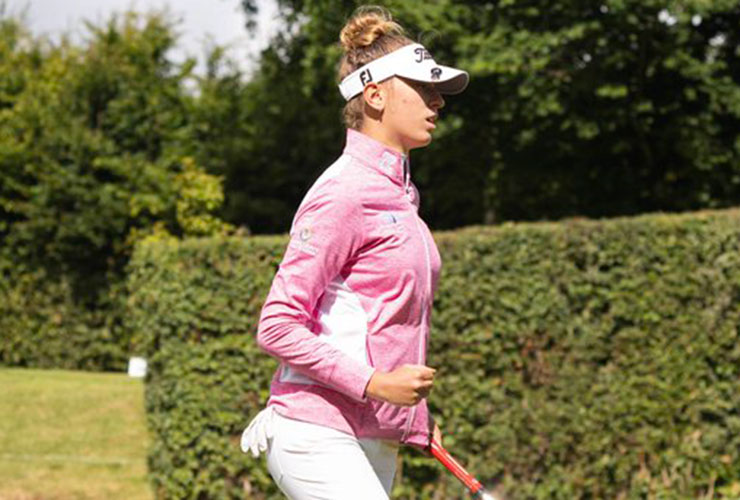 By Matt Smith
Dubai: Chiara Noja had to settle for fifth after shooting a final-round 75 in the €40,000 Ladies European Tour Access Series Trust Golf Links Series – Musselburgh but the Dubai-based teenager was still looking on the bright side.

The German went into the final round leading by one, but finished down the field behind eventual winner and playing partner Arpichaya Yubol of Thailand, who shot 67 for a 10-under total and four-stroke victory.

5th after leading over two rounds is always frustrating @LETAccess @MusselburghGC #trustgolflinksseries —> Sometimes you’ve got it and sometimes you don’t. Nevertheless, managed to earn a spot for the final qualifying of the @AIGWomensOpen pic.twitter.com/MCrSIVnxeL

Despite the blip, Noja managed to stretch her lead on the LETAS Order of Merit standings over second-placed Momoka Kobori — and also secured a spot in final qualifying for the AIG Women’s Open, the final major of the year at Muirfield in Scotland in August.

“Fifth after leading over two rounds is always frustrating,” Noja wrote on social media after the tournament. “Sometimes you’ve got it and sometimes you don’t. Nevertheless, managed to earn a spot for the final qualifying of the AIG Women’s Open.”

With Kobori not playing at Musselburgh, Noja stretched her lead in the Order of Merit. She has 1,639.25 points from eights events and a 306.5-point lead over the Kiwi.

The top six players in the LETAS Order of Merit will gain full playing cards on the 2023 Ladies European Tour.