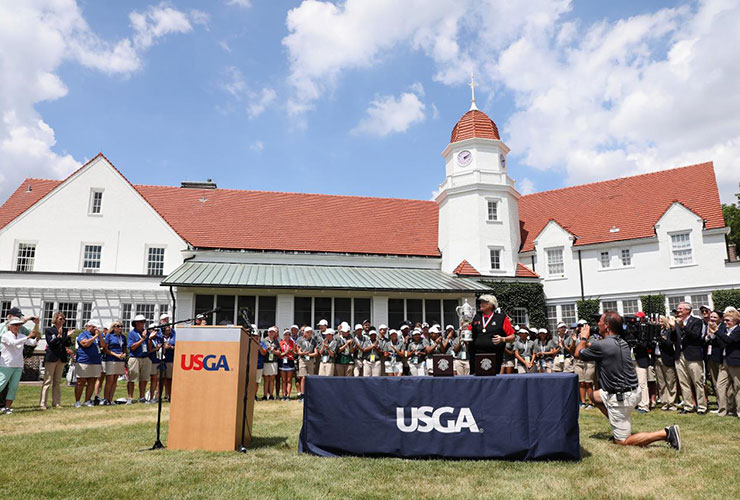 By Joel Beall
The USGA has announced that Chicago Golf Club will host an upcoming US Women’s Open and Walker Cup.

The club, located on the western outskirts of the Windy City, was one of the five founding member clubs of the USGA in 1894. Chicago GC was established by CB Macdonald, who also built the original course before his protege Seth Raynor redesigned it in 1923. The course underwent a recent restoration that included the addition of 13 bunkers that were discovered as part of Raynor’s original design.

“The history of the USGA and American golf can’t be told without Chicago Golf Club, and just over 125 years after hosting its first USGA championship, we’re thrilled to announce our return for two additional significant events,” said John Bodenhamer, USGA chief championships officer. “With the tremendous support of its members and some of the game’s most iconic architecture, we’re confident that Chicago Golf Club will deliver memorable moments and an opportunity for golf fans around the world to see one of America’s finest golf venues.”

The US Women’s Open will visit the course in 2033 with the Walker Cup following in 2036. Chicago GC has hosted 12 previous USGA championships, most recently the US Senior Women’s Open in 2018.

Minjee Lee was this year’s US Women’s Open at Pine Needles, with the US defeating Great Britain & Ireland last year at Seminole for the Americans’ third straight victory. In 2026 the Walker Cup will be moving to even-numbered years.

“Hosting the best players in the world — men, women, amateur and professional — for USGA events is a point of pride for our club and a significant part of our long history,” said Herb Getz, Chicago Golf Club president. “We very much look forward to building upon that history and continuing our valued partnership with the USGA on an even larger stage well into the future.”

You may also like:
Get your FREE November issue of Golf Digest Middle East here
R&A reiterates stance on Turnberry
New date for Irish Open on 2023 calendar
Who won what over the course of LIV Golf’s first season
Scotland’s ghost course is a golfing mystery
The seven ‘scariest’ moments in golf
Atthaya becomes world No. 1 at age 19
Harrison Crowe claims Asia-Pacific Amateur
WATCH: Highlights from the LIV Golf finale
Wrapping up Year 1 for LIV Golf
DJ pulls the final Punch at LIV Golf Team Championship
Tour player injured in serious crash in Bermuda
Prize money payout for LIV Golf Team Championship
Jordan’s Shergo Al Kurdi in for Kaymer at LIV Golf team finals
Sergio has no regrets over joining LIV at expense of Ryder Cup
Power Rankings: How the 12 teams will finish in Miami
Henrik Stenson offers to take lie-detector test
LIV Golf quarter-final draw in full
Packed at the top of Asia-Pacific Amateur
Phil faces up to facing Cameron in quarter-finals
The Gulf Club: The latest news from the UAE and beyond for October
Augusta, USGA, PGA of America added to DOJ investigation
After 27 years in prison, wrongfully convicted Valentino Dixon realises dream in Dubai
15-year-old TK, a LIV Golfer, is going for AAC glory

Stewart Hagestad, who assures you he’s ‘old’, can’t stop beating the young kids at US Amateur

The notorious Hinkle Tree from the 1979 U.S. Open has died, but the legend lives on