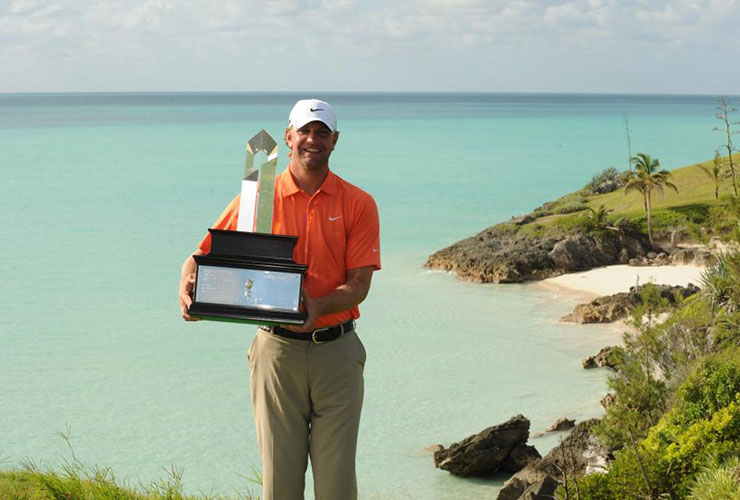 By Alex Myers
For a fourth consecutive year, Port Royal Golf Course will be the site of the PGA Tour’s Bermuda Championship. But it’s going to be tough for the Robert Trent Jones track to create as much drama as it did when it used to host a major. Or, rather, an exhibition for major champions.

Remember the PGA Grand Slam of Golf? Sure you do! It was that 36-hole event in which the four men’s major champs from that year played against each other. Over the course of 35 years, the event produced some great moments until it was cancelled after the 2014 edition. Tiger Woods won seven times. Phil Mickelson fired a 59. And who can forget Lucas Glover cruising to a five-shot win?

OK, so most golf fans probably don’t remember the latter, but it’s Glover’s triumph in 2009 (pictured above) that has been immortalised with a plaque at Port Royal. And a rather obscure one at that.

Port Royal’s signature 16th hole is a spectacular 235-yard par 3 on a waterside cliff. It’s a beast even in calm conditions, but you can imagine the difficulty with high winds. Or with a tournament on the line — even if it happens to be a four-man exhibition, which the course hosted from 2009 to 2014. Because, as legend has it, Glover uttered: “Man, I’ve never been so nervous on a shot” on his way to winning in 2009. And there’s a plaque there with that quote.

“Man, I’ve never been so nervous on a shot”, reads the plaque on No. 16 tee at Port Royal Golf Course, host of the ⁦@Bermuda_Champ⁩

Lucas Glover spoke these words en route to winning the 2009 Grand Slam of Golf. Glover makes his debut in @Bermuda_Champ⁩ this week. pic.twitter.com/AK9FaOuJRa

Interesting. On the obscurity ranking, it still doesn’t top El Camaleon Golf Club having a plaque where Jon Rahm struck his first-ever PGA Tour shot (as an amateur), but that’s up there. Especially considering that, again, Glover won that little hit-and-giggle by five shots over that year’s Masters champ, Angel Cabrera.