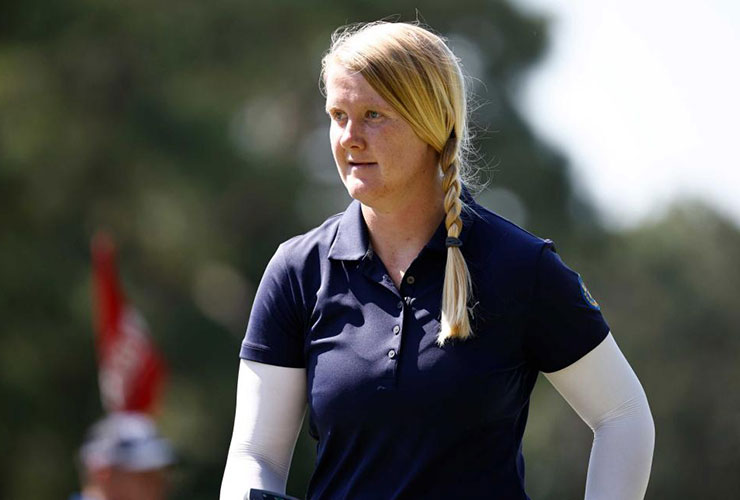 By Shane Ryan
If you’ve seen the shirts with the tiny crocodile imprinted on the chest, you know the brand Lacoste. You might also know the namesake, Rene Lacoste, the old school tennis legend. And if you’re really deep into the Lacoste family, you may also know Rene’s daughter, Catherine Lacoste, is still the only amateur to win the US Women’s Open, a triumph she earned in 1967 at Virginia’s Hot Springs Country Club.

But on a scorching Thursday at Pine Needles, 22-year-old Ingrid Lindblad — “Iggy” to her friends — posted a six-under 65, the lowest round by an amateur in Women’s Open history, to take the early opening-round lead and start the conversation again about whether another amateur could one day win the most coveted title in women’s professional golf.

Lindblad, a native of Halmstad, Sweden, is No. 2 on the Women’s World Amateur Golf Ranking and the reigning SEC champion from LSU. She got into this week’s field as a late alternate. When tee times for the first and second rounds were released on Monday, she couldn’t believe who she was paired with — in addition to former US Women’s Open winner So Yeon Ryu she would be playing with her hero Annika Sorenstam, a three-time winner of the championship competing again for the first time since 2008.

“When I saw that I’m playing with her I was like in shock,” said Lindblad, who ended the day in solo second, one stroke back of leader Mina Harigae. “I was like, this cannot be true. Then on the first tee box I get her scorecard, I’m like, ‘I have Annika’s scorecard in my hands.’”

Like a lot of young Swedish golfers, Lindblad has long been influenced by Sorenstam. In 2014, she first played in a Sorenstam-sponsored event. By 2019, at the Annika Invitational in St. Augustine, Florida, the two knew each other well enough that after Lindblad won the tournament and realised she didn’t have a ride to the airport in Orlando, Sorenstam gave her a lift.

“She can be quite bubbly,” Sorenstam joked on Thursday, after shooting three-over 74 in her return round, “so it was more listening than talking.”

Sorenstam went on to compliment Lindblad’s game, highlighting not just the impressive length, but also her touch around the greens. For Lindblad’s part, to have Sorenstam fist-pumping a few of her birdies was a surreal and rewarding experience. After an opening birdie, she made her first bogey on the par-5 10th hole, but after that stumble, Lindblad was nearly perfect, making six more birdies over the next 16 holes and punctuating her round with a final long putt for birdie on the eighth. 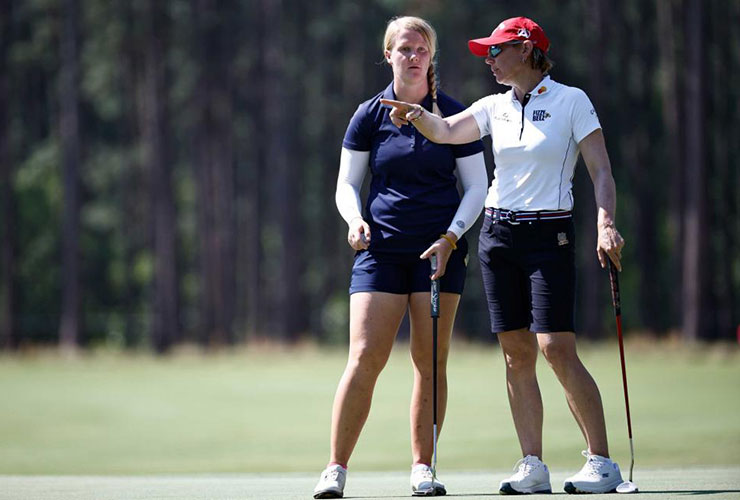 Lindblad has known Annika Sorenstam since 2014, but playing with her at the US Women’s Open was its own treat. Jared C. Tilton

Also helping Lindblad was the veteran she has as a caddie. Only Sophie Gustafson isn’t a veteran caddie but rather a veteran player who played in the three previous US Women’s Opens at Pine Needles in addition to eight European Solheim Cup teams. Gustafson, 48, caddied after ending her playing career and met Lindblad for the first time this week. The two were connected by the coach for the Swedish National Team after Lindblad got her late spot in the field.

Appearing before the media, her hair tied in a braid, Lindblad was excited and a little surprised at the attention. When the USGA official read off her name, a prelude to listing the accomplishments of her round, she said: “Yes!” as if answering a roll call. When a reporter asked if she wished she’d turned professional a few days ago, considering the massive $10 million purse, she laughed and stated her commitment to remaining in college “for another year or so.”

Lindblad arrives at Pine Needles on the heels of an incredible season at LSU in which she was a finalist for the Annika Award — of course — as the nation’s best female collegiate golfer. In a late season stretch, she won four of five tournaments, finished second at the Augusta National Women’s Amateur, and punctuated the torrid stretch with a victory at the SEC Championship. At the NCAA Championship, she finished in a tie for third, five shots behind the World’s No. 1 amateur Rose Zhang.

Now, she’s off to a hot start in what would be not just the greatest accomplishment of her competitive life, but one of the most remarkable stories in women’s golf. Lindblad is a fan of jigsaw puzzles — “at least a thousand pieces,” she said — and using those terms, she’s perhaps solved the borders at Pine Needles, but has a lot of space to fill in starting on Friday. The pressure will be unique, and so will the competition, but even at the young age of 22, she’s a proven winner who seems to have the talent and pedigree to follow in the footsteps of … well, you know who.

US Women’s Open: What does it mean to play for $10 million? How about keeping your golf dreams alive