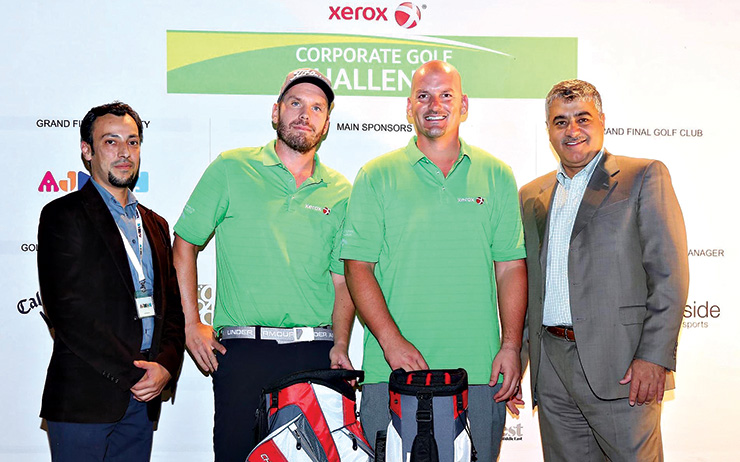 he second qualifying round of the 18th Xerox Corporate Golf Challenge, held at Yas Links Abu Dhabi, identified the second group of teams to qualify for the Grand Finals, to be held in Ajman later in the year. Manny Ostojic and Mattias Bjorn from Jump Sports Academies paired up to score 47 points, enough to win the round by two points from their nearest rivals.

The Dubai & Surfers team of Nicholas Hymas and Ghazi Arungazeb finished alone in second on 45 points, a total that on many other days would have been good enough for the outright victory. Two teams scored 44 points each and after countback, third place went to Christopher Bentley and Christian Seear from The Strokers team. Fourth spot was awarded to Hiram Diggines and Andrea Hartley from Dream Team. Back in fifth was Aseem Azim and Saquib Mahmood from Team S&A with 42 points.

Related: Tenzin and Riaz are champions in Oman again

DeVere Acuma’s Nearest the Pin on the eighth hole was won by Sungjin Hwang, and Chrysler’s Nearest the Pin on 17 by Ken Lowry. Meanwhile, a new on-course competition, King of Pars, has been introduced to the 2016 Challenge. This competition recognises and rewards teams that perform best on Par 3s, Par 4s and Par 5s. The teams that score the best on the various hole categories win a prize as well as enter the Golden Ticket draw, which will see the lucky entrant win a place in the 2016 Grand Final. Winning the Par 3 spoils was the team of Sungjin Hwang and Moonwon Jo, with Peter Godard and Chris Hewett claiming the Par 4 prize. The Par 5s were won by Mira and Iain Milligan.

To register for the Xerox Corporate Golf Challenge, go to www.xeroxcgc.com