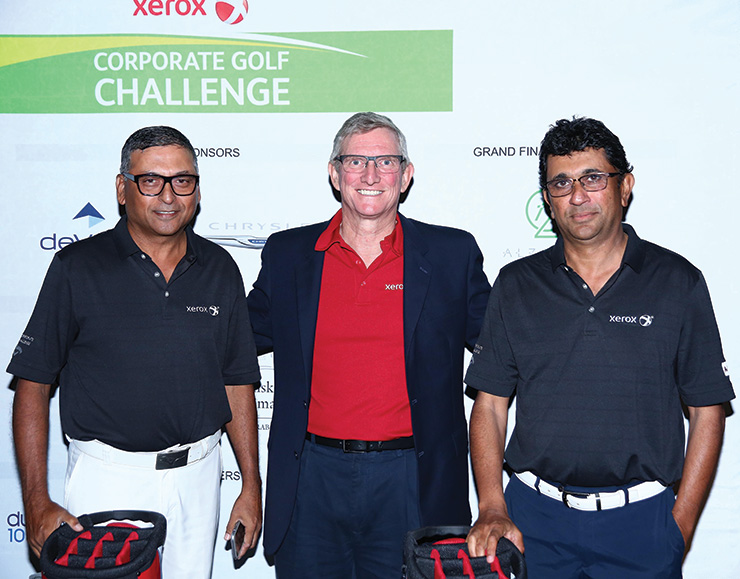 new edition of the Xerox Corporate Golf Challenge, the region’s most popular and far-reaching corporate golf series, began last month at Al Zorah Golf Club, the host venue for December’s grand final. Attracting over 1,300 participants in 2015 across 14 qualifying rounds, the first qualifier in 2016 – held on March 3 – brought together a full field of pairs eager to book their places in the two-day final.

On the UAE’s newest championship course, the duo of Baba Subramanium and Paul Joseph combined for 40 stableford points and the victory. These qualifiers are usually tight affairs, but the triumphant pair ran out comfortable winners on this occasion, by three points over the runners-up, Chris Elms and Brett Beech (37). Three teams scored 36 points and after a countback, third place went to Neil Hamp-Adams and Julek Szczawinksi, with fourth going to Shabir Yakoub and John Spicer. David Minchin and Simon Earl claimed fifth spot.

Related: Tenzin and Riaz are champions in Oman again

A new on-course competition – King of Pars – has been introduced to the 2016 Challenge. Recognising those pairs that perform the best on the par 3s, par 4s and par 5s respectively, the teams winning each of these hole categories bag a prize as well as enter a Golden Ticket draw for a place in the 2016 Grand Final. In the first qualifier, the King of Pars winners were Paul Abouchacra and Hisham Shammas on the par 3s, Sunny Ramadas and Roy Holmes on the par 4s and Thomas Wiberg and Rune Rasmussen on the par 5s.

For more information and to register your team, go to: www.xeroxcgc.com