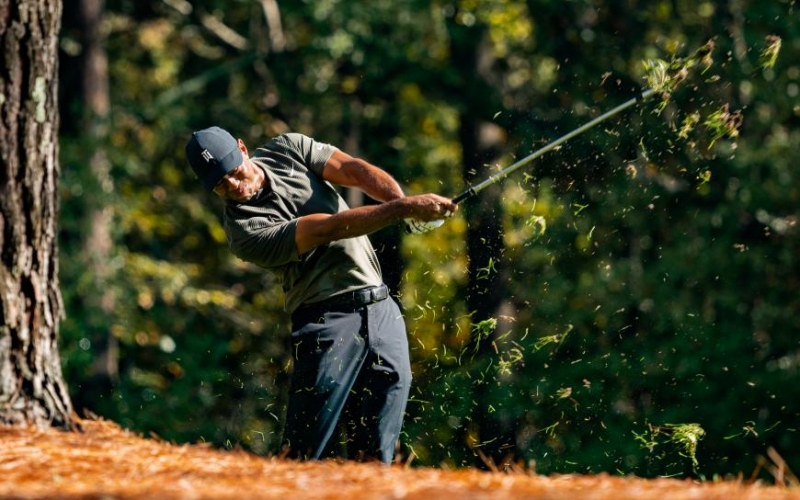 By Brian Wacker
Tiger Woods did something on Thursday that he had never done before, opening with a bogey-free round at the Masters.

More importantly, his four-under 68 leaves him just three strokes off the lead at Augusta National.

But there are other reasons to feel good about Woods’ position as he tries to defend his title and seeks a record-tying sixth green jacket and 16th career major title.

Thursday marked the ninth time that Woods has broken par in the first round of the tournament. On the previous eight occasions, he finished no worse than a tie for eighth. Four of those times, he went on to win, including last year, when he opened with a 70 on his way to a 13-under total and one-stroke victory.

It was also his first bogey-free round in any major since the 2009 PGA Championship at Hazeltine National. He finished in second three strokes back of Y.E. Yang.

The two other times Woods opened bogey-free in a major, he left the field in his wake, winning the 2000 U.S. Open at Pebble Beach by 15 and that same year’s Open Championship at St. Andrews by eight.

As for how this year’s Masters will turn out, there’s still a long way to go. Because of heavy rain and lightning, the opening round was delayed for three hours, meaning players will be playing catch up each of the next three days. It also meant that the golf course was soft in the opening round.

“I got off to a fast start today, which is good, but I think everyone is,” Woods said. “Everyone is going low out there today. With these conditions, you have to. You have to be aggressive. There’s no reason why you can’t fire at a lot of the flags.”

For his part, Woods did just that, especially early on. Starting his day on the 10th hole at Augusta, he birdied the par-5 13th and 15th, two holes he has feasted on over the years.

Then he added another on the par-3 16th. In a shot reminiscent to the spectacular one he hit in the final round a year ago, he again spun his ball to tap-in distance.

Even holes that are usually problematic for Woods, he didn’t struggle with on Thursday.

At the difficult par-4 first, he made birdie; it was just his eighth there in 87 Masters rounds and his first on the hole since 1999. On the long par-3 fourth, which Woods has played in a combined 17 over through the years, he made par. Then on the fifth, which he bogeyed all four days in 2019, he made another par.

“I hit a little squeezer off the tee and had 227 to the hole, hit a 4-iron to the back edge and it only rolled out a foot,” he said of the latter. “That doesn’t happen here.”

And if Woods can continue these trends, beating him come Sunday might not happen either.

More from the 2020 Masters
• Tiger Woods was feeling it Thursday and you didn’t even need to see his score to know
• Paul Casey’s opening 65 gives Peter Kostis something to cheer from afar
• Jon Rahm says he experienced a couple ‘reality checks’ playing with Bryson DeChambeau
• The Bryson Reckoning did not come to Augusta National. Or did it?
• The six most intriguing stats from Thursday at Augusta National
• Here’s how the tournament can get back on schedule for an on-time Sunday finish
• Xander Schauffele on Augusta’s easy conditions: ‘A lot of it felt wrong’
• How a 62-year-old former champion became the biggest surprise on Thursday at Augusta
• You won’t believe how bad Kevin Na putted on Thursday
• The Masters opening tee shot ceremony, even without patrons, still had all the feels