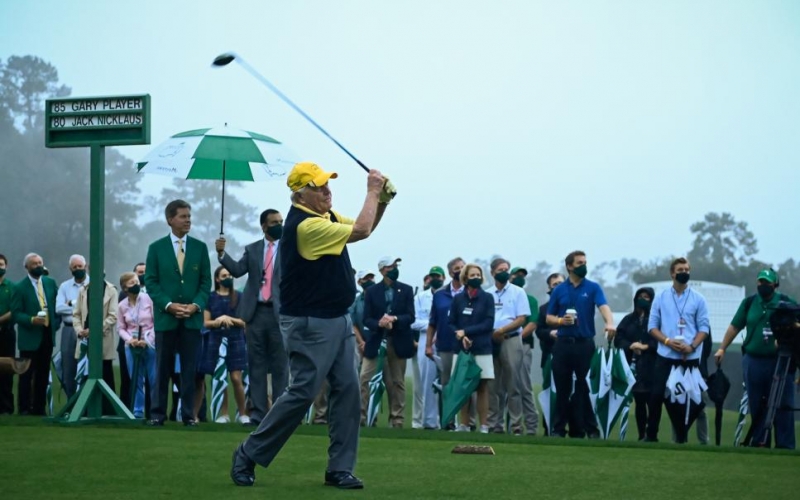 With a fog rolling up from Rae’s Creek and a soft mist blanketing the property, the first tee felt like the farm in “Field of Dreams.” And like the seminal baseball film, legends of yesterday walked onto the grass, coming not from stalks but a big oak serving as their time vessel.

Jack Nicklaus and Gary Player strolled through a small gathering of Augusta National members, media, players, family and friends to the first tee to act as Honorary Starters for the Masters. The men, with nine Masters between them, did their duty, striking their shots to officially start this tournament unlike any other. The thickening fog made their trajectories tough to decipher. Where they landed is besides the point.

Because, no, it wasn’t the same, not with patrons at home instead of hugging the first hole’s ropes. But in a year when so many traditions have been stopped or postponed or taken away completely, this ceremony, albeit simplified, happened. And that alone is worth celebrating.

And Nicklaus, with wife Barbara as his caddie, and Player shared that sentiment, revelling in the moment that was shared by those that surrounded them, delivering a scene that exemplifies why this tournament means so much to so many.

More from the 2020 Masters
• Why Tiger is in great position to win a sixth green jacket
• Tiger Woods was feeling it Thursday and you didn’t even need to see his score to know
• Paul Casey’s opening 65 gives Peter Kostis something to cheer from afar
• Jon Rahm says he experienced a couple ‘reality checks’ playing with Bryson DeChambeau
• The Bryson Reckoning did not come to Augusta National. Or did it?
• The six most intriguing stats from Thursday at Augusta National
• Here’s how the tournament can get back on schedule for an on-time Sunday finish
• Xander Schauffele on Augusta’s easy conditions: ‘A lot of it felt wrong’
• How a 62-year-old former champion became the biggest surprise on Thursday at Augusta
• You won’t believe how bad Kevin Na putted on Thursday