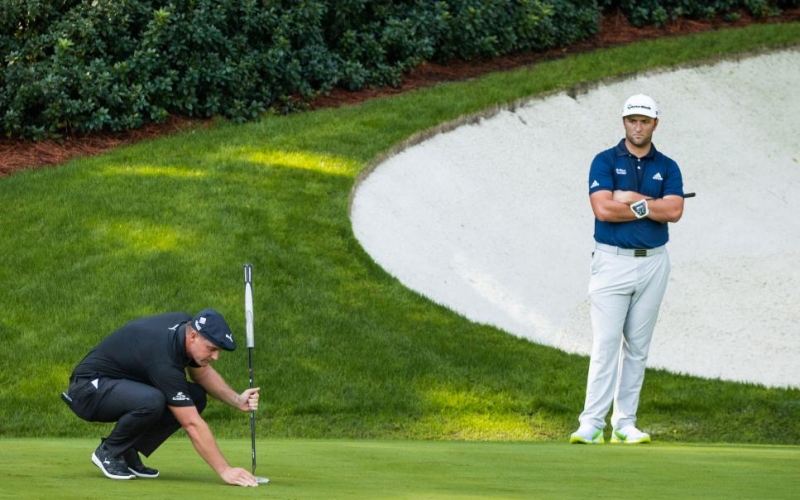 By Alex Myers
With all the attention on Bryson DeChambeau—specifically, his length—heading into the 2020 Masters, we’d forgive his fellow golfers for being sick of talking about the reigning U.S. Open champ. But one of his playing partners on Thursday, Jon Rahm, was quite candid when asked about the reigning U.S. Open champ. And quick to concede he can’t hang with him when it comes to hang time off the tee.

Rahm may have gotten the best of Dechambeau by a shot in the opening round at Augusta National, but he admitted to experiencing a “couple reality checks” in terms of distance.

To be clear, this isn’t Fred Funk talking. Or even someone like the third golfer in the group, Louis Oosthuizen. This is Jon Rahm, one of the most powerful players on the planet.

Here’s a look at DeChambeau’s drive on No. 5, a mighty 347-yard clout of all carry that easily flew the two cavernous bunkers down the left side:

Remember when Augusta National made adjustments to the 5th hole to bring the bunkers more into play? pic.twitter.com/HA7dLKg5Pg

Overall, DeChambeau averaged 334 yards off the tee, a number made more impressive by the soggy conditions. But Rahm, who checked in at only 314 yards per poke, says he and Oosthuizen were more focused on the shorter distances—and clubs—DeChambeau had on his second shots during his first-round 70.

“The funny thing is Louis said it; we both hit a club that was a 7 into 15, but Louis hit a 7‑wood and Bryson hit a 7‑iron,” Rahm said. “It’s funny sometimes to just hear the numbers they’re talking about, it’s an 8‑iron, and the tee shots they’re hitting. On 18 he was questioning if he could carry the bunkers, and me and Louis were not even near hitting to the bunkers. It’s a different golf course, but I think today proves that no matter how far you hit it, you still need to make the putts.”

Rahm (69) and Oosthuizen (68) made more of those putts for one day, but that could change. What won’t is who in the group will consistently be hitting his approach shot last on Friday.

More from the 2020 Masters
• Why Tiger is in great position to win a sixth green jacket
• Tiger Woods was feeling it Thursday and you didn’t even need to see his score to know
• Paul Casey’s opening 65 gives Peter Kostis something to cheer from afar
• The Bryson Reckoning did not come to Augusta National. Or did it?
• The six most intriguing stats from Thursday at Augusta National
• Here’s how the tournament can get back on schedule for an on-time Sunday finish
• Xander Schauffele on Augusta’s easy conditions: ‘A lot of it felt wrong’
• How a 62-year-old former champion became the biggest surprise on Thursday at Augusta
• You won’t believe how bad Kevin Na putted on Thursday
• The Masters opening tee shot ceremony, even without patrons, still had all the feels