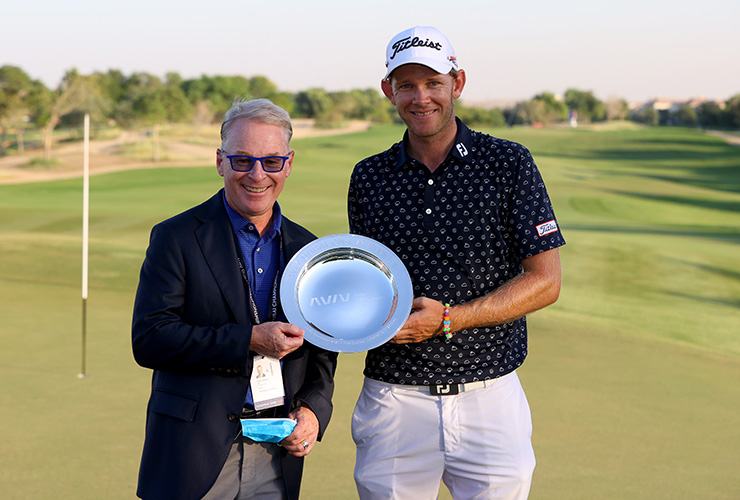 By Kent Gray
JB Hansen won’t ever forget his AVIV Dubai Championship victory on Fire, especially not as the Dane got to share his second European Tour title inside a year with family and friends at Jumeirah Golf Estates.

Sadly, the relentless cadence of tournament golf waits for no man, with the spotlight now firmly on the season-ending DP World Tour Championship just four days and a mere hop and skip away over on JGE’s Earth layout.

The uncomfortable truth is, even before Hansen had wrapped up his final round 68 to edge Bernd Wiesberger and Francesco Laporta by a stroke, the golfing world had moved on, suddenly intrigued by a story about another significant no-show.

Few will publicly question Jon Rahm’s decision to put his family and mental and physical well-being first but the world No.1’s decision to withdraw from the DPWTC at the 11th hour was a PR dagger, one with consequences that will linger far beyond the probability of an American becoming European No.1 for the first time this coming Sunday.

Remember, this is not only the supposed climax of the season with a $9 million purse, the tour’s richest prize fund outside the majors and WGCs. It is also the flagship event of the Dubai corporate who is reportedly investing $40 million annually to take over naming right sponsorship of the European Tour from the 2021-22 season.

It’s not a good look when the world No.1, a player who is third in the Race to Dubai Rankings and seemingly the only one seriously able to challenge Americans Collin Morikawa and Billy Horschel for the Race to Dubai title, can’t conjure four more days out of his tired body and mind, notwithstanding that the said “demands of a long season” had led to the “difficult decision not to travel to Dubai next week.”

Sponsors and fans might have been able to turn a convenient blind eye except the European Tour confirmed that Viktor Hovland and Justin Rose had also taken the decision to withdraw just a day earlier. It’s all a tad embarrassing given the trio had been front and centre in a whiz-bang video to launch the rebranded DP World Tour just two days before that at a big Expo 2020 media event.

Don’t forget either that European Tour CEO Keith Pelley has been forced to grant Sergio Garcia and Patrick Reed special exemptions to play the DPWTC even though they have failed to meet the minimum eligibility requirements and have been removed from the Race to Dubai rankings as a consequence. With three big names withdrawing, the tour clearly could not afford to lose any more fan or TV broadcast pulling power, even if Garcia and Reed will play only bit-part roles in the main narrative this week.

Behind the scenes at JGE this week, Pelley’s has also been busy circling the wagons around the soon-to-be DP World Tour and, by extension, its strategic partner, the PGA Tour.

Golf Digest Middle East is privy to an email Pelley sent to players over the weekend that spells out the unceremonious end to the European Tour’s strategic alliance with the Asia Tour now the latter has hitched its wagon to Saudi Arabian investment.

Pelley said the agreement, dating back to 2016, would not be renewed, that no events would be co-sanctioned “moving forward” and critically that there would be no route to the European Tour via previously open Asian Tour pathways. Furthermore, any European Tour player wishing to tee it up in any Asian Tour event herewith must apply in writing to Pelley no less than 30 days before the conflicting event. “Once the application is received, together with our Executive Team I will evaluate and review each request on its individual merits, and revert to you with my decision in due course,” Pelley wrote.

With planning for the LIV Golf Investments start-up league fronted by Greg Norman and bankrolled by the Saudi PIF rumbling along, the boundaries of the global game are being redrawn and fiercely defended. How the players will react to announcements like the European Tour’s decision to immediately cut ties with the once friendly Asian Tour remains to be seen; the players see themselves as private contractors after all and will ultimately go where the big money and best opportunities are. Some will be comfortable picking sides, others will covet freedom of global trade.

The problem for the soon-to-be DP World Tour, even with 47 events and minimum $2 million purses, is that the Race to Dubai is no longer an irresistible magnet to the circuit’s biggest names. It perhaps never was and a bolstering of the DPWTC purse to $10 million in 2022 seems unlikely to change that.

A format that requires a player to commit to so few regular-season events to qualify for the DPWTC and rewards so richly those playing majors and WGC events confined largely to the U.S. (and Asia) is fundamentally flawed. If the European Tour wasn’t already a feeder to the PGA Tour, it is speeding headfirst along that path now. Pelley and co. must also surely fret at what the Asian Tour might become, thanks to being at the epicentre of the world’s largest market and emboldened by the sudden influx of Saudi Riyals and a Kingdom of global ambition.

The bottom line on Sunday, at what should have been a widely heralded penultimate event of the season, was that the AVIV Dubai Championship was relegated to a sidebar story. Hansen and Dubai deserved better. The DPWTC certainly deserves more this week and beyond. It’s simply not good enough that the game’s biggest names give a few days’ notice of their unavailability or, worse still, don’t even have the Race to Dubai title on their radar at all.

Unfair? We’ll give Horschel, who is second in the R2D rankings and could easily own the once-coveted Harry Vardon Trophy come Sunday, the final word:  “I’ll be honest, at the beginning of the year, the Race to Dubai wasn’t one of my goals,” said Horschel.

“But after playing well in the WGC events and playing decent in the majors, that changed.”