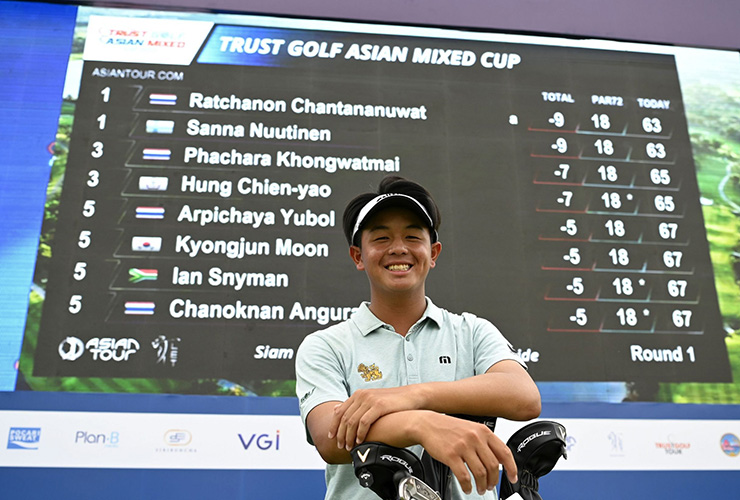 By Matt Smith
Thailand’s Ratchanon ‘TK’ Chantananuwat may have been short of practice due to  school studies but the 15-year-old amateur was top of the class thanks to a nine-under-par 63 to take a share of the lead in the inaugural Trust Golf Asian Mixed Cup.

His round at the groundbreaking mixed evend co-sanctioned by the Asian Tour and Ladies European Tour (LET) was matched by Finnish female Sanna Nuutinenon the Waterside Course at Siam Country Club, while Thailand’s Phachara Khongwatmai and Hung Chien-yao from Chinese-Taipei carded 65s for a share of third.

The $750,000 tournament marks the first time the Asian Tour has staged a mixed event.

Ratchanon has now shot two 63s in his last three rounds on the Asian Tour, the first one coming in the third round of the International Series Thailand at Black Mountain Golf Club last month.

“The one thing I have seen with these two 63s is I am not expecting anything,” he said.

“At Black Mountain I birdied 18 to just make the cut, and then I shot nine-under with zero expectations. The last three weeks since Black Mountain I have not been playing very much, I have been doing a lot of schoolwork. Out of the six or seven events I have played on the Asian Tour this one is the least I am prepared for, and yet I shot nine-under, so I am going to have to start doing something with these low expectations.

“Obviously with a start like this I am going to try and win it. I now know my approaches aren’t as bad as I thought. I won’t be upset if I don’t shoot nine under again, but I will try and go for as many birdies as possible and make the least bogeys as possible.”

The brilliant young golfer has not missed the cut in his six starts on the Asian Tour and finished third in the Singapore International in January. 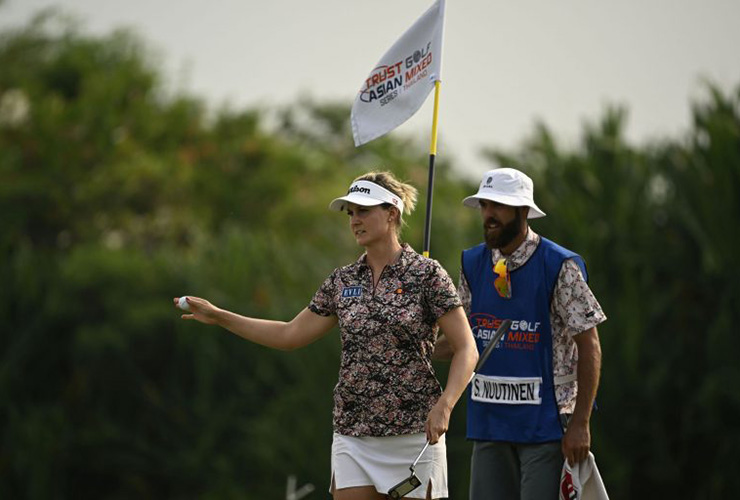 Nuutinen’s impressive round was built upon an incredible first nine eight-under-par 28, consisting of eight birdies and a par on five. A birdie on 10 suggested a phenomenal score was on the cards but the birdies dried up and she dropped a shot on 17 before making a birdie on 18 to catch Ratchanon, who was playing in the group ahead.

“I don’t really hole out much in practice rounds so I never really know if it’s coming,” said 30-year-old Nuutinen.

“I know I have been doing a lot of good work technique-wise, a little bit in putting. I actually flew home from LA [from LPGA events] to Finland for four days before coming here which was a change of plan. I think that was worth it to see my coaches for a couple of days and this happens next.

“I would be lying if I said I didn’t think about 59 because I did but it was just at one point. I told myself let’s see how low you can go, nothing really changed after I was nine-under I just kept going. Sometimes I have been in that situation before, and you might get a little bit defensive but I’m too old for that.”

Thailand’s Chanettee Wannasaen and Meghan Maclaren from England are in fifth after firing 66s.

Current Asian Tour Order of Merit leader Sihwan Kim from the United States, who won the International Series Thailand came in with a 68, as did his compatriot and four-time Asian Tour winner John Catlin.