South Africa is a long way to go to play golf for most people. Thankfully, the country also offers many other great courses to choose from to make your trip worthwhile.

By Tan Ju Kuang
South Africa is one of the premier golf destinations in the world. Fantastic weather, beautiful topography, a great variety of luxury accommodations and a hospitality as warm as you’d find anywhere sets you up for a wonderful trip. But the ultimate attraction is the vast number of top-level courses that you can play. Here are just a few that you can’t go wrong with. 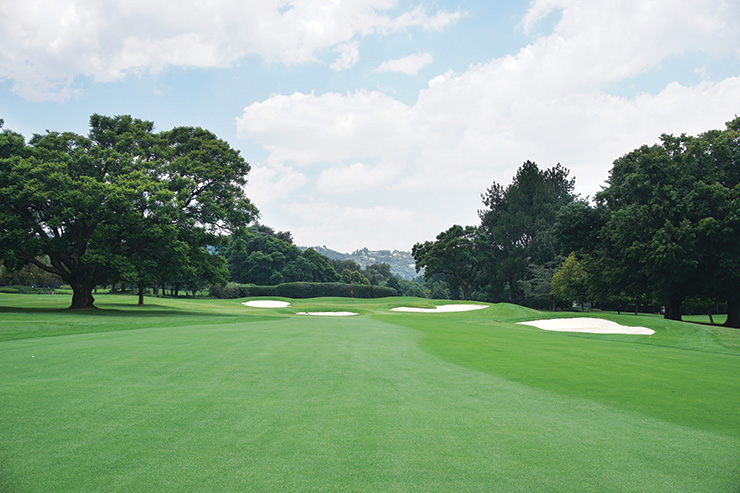 The East Course is considered the championship layout. Designed by Robert Grimsdel in 1939, the course still holds its own as a classic parkland design with holes framed picturesquely by trees. It underwent an upgrade in 2017 but still maintains much of its traditional charm. Bent grass greens and kikuyu fairway turf make for excellent playing surfaces. The relatively flat topography makes it a great walk as well. Most of the hazards come by way of small ponds strategically positioned or the numerous gorgeously appointed sand bunkers that influence your direction. At 7,001m, the East isn’t considered a terribly long course, but the challenges along the way will certainly keep you on your toes.

The West Course is the shorter of the two (6,225m), and considered relatively easier to play. Greens are larger here, but if you can’t keep your ball in play, the copious collection of trees, and water features will punish you. Designed by former greenkeeper Lawrie Waters, it is actually the club’s older course, having opened in 1927.

One of the lovely things about visiting Royal Johannesburg and Kensington is having a drink or meal on the terrace of the clubhouse. There is nothing overly flashy about the place, but the warm and friendly disposition of everyone here contribute to the experience of whiling away a quiet afternoon sipping your favourite drink under the shade of tall trees.

Though the place is known to be a private members’ club, visitors are allowed to play. You certainly won’t want to pass up on this if ever you’re in Johannesburg for golf. 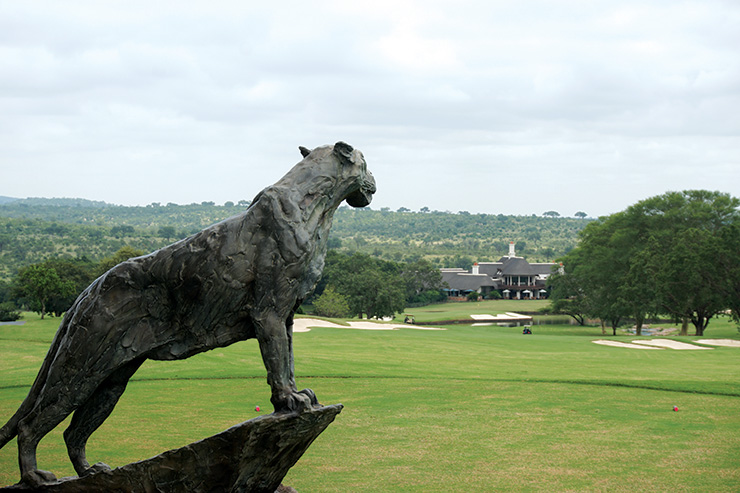 Leopard Creek
If you’re hoping to see wild animals when you’re playing golf in Africa, you’ve come to the right place at Leopard Creek. The club is located right inside Kruger National Park, and even before you get to the first tee, you’d likely see an elephant in the distance while walking to the clubhouse to register.

Opened in 1997, the course is typically available only to private members. However, access to the course may be obtained if you stay in one of the 15 five-star lodges found on the property. But catching a glimpse of one of the big five isn’t the only thrill you’ll have playing the Gary Player course at Leopard Creek.

Playing Leopard Creek is like no other experience in South Africa. The course is so tranquil and quiet, you can hear an elephant trumpet across the eponymously named creek separating it from the national park beyond. In fact, on one of the holes, you can look into the park and if you’re lucky, catch a glimpse of some of Africa’s famed beasts drinking from the watering hole. Conditions on the course are remarkably pristine and the terrain typical of African bushland giving it a unique characteristic.

There was extensive renovations made between 2017 and 2018 where the turf grass was changed to Cynodyn. This grass that is endemic to the area is now found on all surfaces offering year-round playability, and long-term sustainability.

Members, guests and visitors have the privilege of enjoying the elegant clubhouse situated by the banks of Crocodile River. Having a cocktail at the bar watching the sun set is a remarkable occasion. As is shopping in the sprawling pro shop that offers a wide selection of Leopard Creek-logoed apparel and accessories.

One thing you should do is ask to see the collection of hickory clubs kept in storage. This preservation of heritage, the provision of exclusivity, and the splendour of the club’s location amidst the African Bush make Leopard Creek like no other on the face of this earth.

Pearl Valley Golf Estate and Spa
Not many golf resorts can pride itself on having Jack Nicklaus’ name on it, but Pearl Valley certainly can. The Pearl Valley Jack Nicklaus Signature Course here is a testament to the quality of not only the layout but the overall experience one will have here.

Built in 2003, Pearl Valley has gone on to win awards after awards. Recently, it was awarded the 2018/2019 Top Five Golf Courses in South Africa by Golf Digest South Africa. Given the high number of great places to play here, that is one accolade not to snuff at.

Of course, the truth is in the pudding and there is every reason you will enjoy your round thoroughly. There is not much of elevation change on this property located about 40 minutes from Cape Town by car, but Nicklaus’ use of indigenous bush, ponds and bunkers provide great movement on the holes requiring you to use a variety of shots.

You’d do well also to look up every now and then.

“The clever use of water through the course and the diversity of risk reward holes keep you interested and excited,” says Damian Wrigley, General Manager of Pearl Valley. “I also love that the beautiful back drops of the Simonsberg and Drakenstein mountain ranges which have been shown off as much as possible.

“Nicklaus’ brief was to make it one of a kind in South Africa, something truly special. Holes were not to blend into each other but to be a course that players would remember and look forward to playing again. This was certainly achieved in my opinion.”

No one would refute Wrigley’s belief. The course is highly playable and each hole is unlike the other. As you get from one green to the next tee box, the holes continue to introduce themselves with increasing pleasure, and all the time with the rugged skyline of the surrounding mountains framing your view.

Of course, you can take it that Pearl Valley is more than just Jack Nicklaus’ Signature Course. It is part of a large, high-end residential project that includes a hotel, restaurant and bar, a gym, tennis courts, as well as the full-fledge Camelot Spa. The property also includes conference facilities, making it an ideal, stand-alone venue for events. 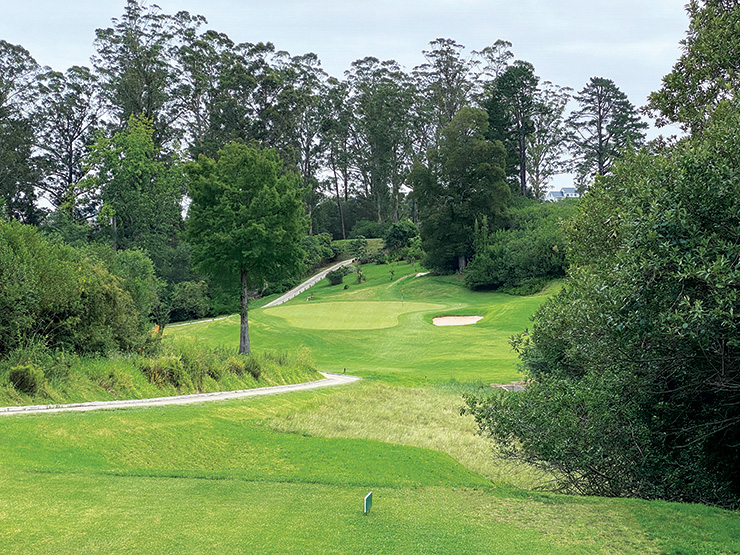 George Golf Club
George Golf Club may not be as famous or as luxurious as its neighbour, Fancourt, down the road, but that doesn’t mean it’s any less enjoyable to play. What it lacks in pizzazz and world-wide reputation, it more than makes up for with character.

The club’s origins stretch back more than a hundred years, but the course was only built in 1930, designed by CM Murray. The relatively short layout (back tees play to a 6166m) starts off humbly on relatively flat terrain, then the action begins after you make the turn.

From the 10th hole onwards, George takes you on a bit of a roller coaster ride. Holes dip into valleys, and climb towards uphill greens – some perch on a side of a hill. Water comes into play in a big way on the par-3 17th where a large pond fronts the small green on this 185m-long hole. The club says that it has been ranked as “the best par 3 in South Africa”, and we won’t be one to argue.

Beyond a course that is incredibly fun to play, there is something special about a visit here. “Firstly, we have a dedicated team of staff that are committed to make the whole experience a great one from the welcome, to presenting a great golf course in the best condition, to providing a relaxed and friendly atmosphere after the game,” provides Daryl Austin, Club Captain at George Golf Club. “We treat our visitors like members and all of this for the most value for money that golf can offer.”

The club also contributes to the game in more ways than offering golfers a wonderful place to play. “We have a very strong development programme which is run by one of our honorary members where young aspiring golfers of all cultures are taught the game and play nine-holes for free,” Austin adds. “We also encourage juniors to join our club at a very affordable rate.”

RELATED: By George, the golf is great! 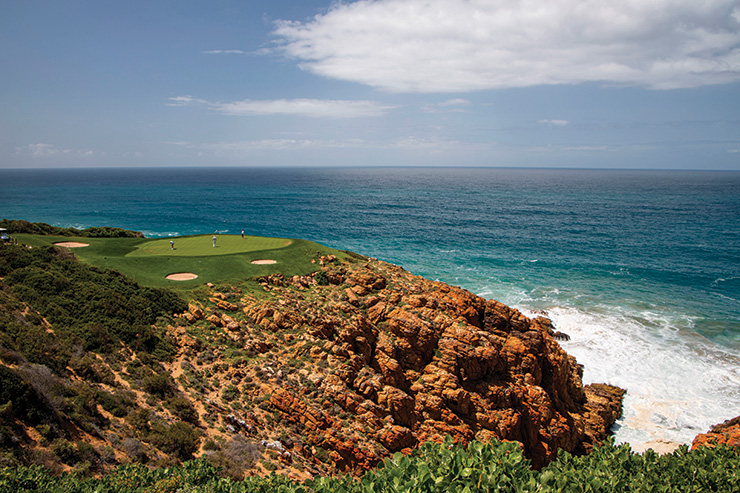 Pinnacle Point Estate
If drama is what you look for in a golf course, you’ve come to the right place at Pinnacle Point. Designed by Peter Matkovich with Darren Clarke, the property sits on the side of a steep cliff by the ocean in Mossel Bay, about half an hour from George. But this proximity implies nothing about the golf at these two locations.

Experiencing Pinnacle Point is a unique endeavour. Few courses around the world offers the kind of views afforded here. No less than seven holes line the ocean rock cliffs on this par-72 layout. And you’ll have the weather conditions to deal with in addition to some blind holes that you’ll need to entrust to your swing, and the winds that blow in from Antarctica.

There are no trees on the course, in its place are fynbos bushes that are characteristic of South Africa’s Eastern and Western Cape regions. On some of the blind holes, you’ll need to aim at mounds in the distance to guide your shots. Though this may not be some golfers’ cup of tea, it does add to the mystique of playing here. Just take it with a good sense of adventure.

On the holes where you can see where you should be going, getting there without losing balls may not be that easy. Holes 7, 8, 9 and 13 ask that you flirt with rocky ravines on your way to the greens, providing jaw-dropping vistas as well as a stern test of your resolve and swing. Whatever you do, bring lots of golf balls, and don’t forget your camera.