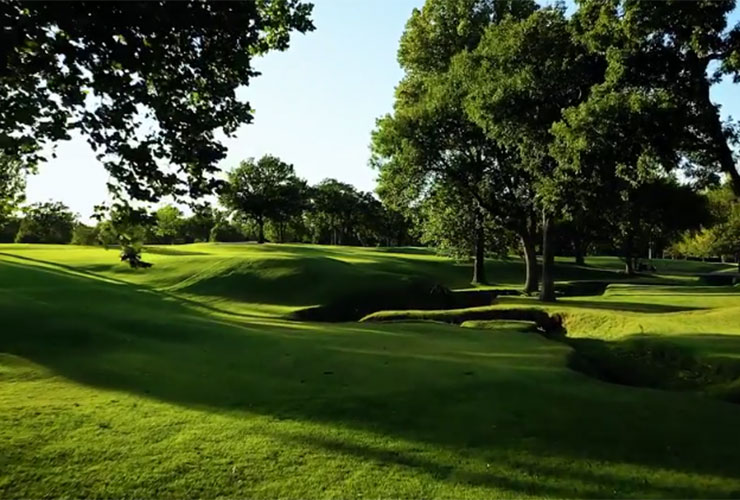 If you’re like many golfers, the image you have of Southern Hills Country Club in Tulsa, Oklahoma, host of the 2022 PGA Championship, is one of oppressive heat, stern dogleg holes lined with trees and ankle-deep rough that made balls disappear. This is because the seven men’s majors played here (three US Opens and four PGA Championships) have taken place on a densely wooded course in the peak humidity of June or August. Endurance, if not mere survival, was as much a factor in players’ success as accurate driving and solid putting.

The last time the world tuned in to Southern Hills, Tiger Woods was dissecting the course on his way to his fourth PGA Championship title, rarely pulling driver in order to stay out of the sticky, punch-out rough. When eyes are cast back on the course this year, they may not recognise what they see. First, it will be May and not the height of summer. And second, following a 2018 renovation by Gil Hanse and Jim Wagner, Southern Hills has been peeled back and opened up.

Hanse and Wagner thinned trees throughout the course, expanded fairway widths, rehabilitated the stream system that snakes through the course and reshaped the bunkers to better reflect what Perry Maxwell originally built in 1936. Perhaps most importantly, they removed the rough from the edges of the greens to capture more outside pin placements — and to allow balls to run away from the raised putting surfaces when players miss approaches.

The gamble is that this kind of set-up — one closer to the course that Maxwell created rather than one doctored specifically for the championship — will showcase a fuller range of contestant’s skills, making recovery, decision-making and creativity just as elemental as straight hitting and great putting. If it works, major championship golf is in for a great run — Hanse and Wagner will have applied a similar approach to allowing the founding architect’s vision shine through on no less than 10 venues they’ve renovated that will host majors over the next dozen years.

PGA Championship 2019: John Daly approved to use cart at Bethpage, according to report