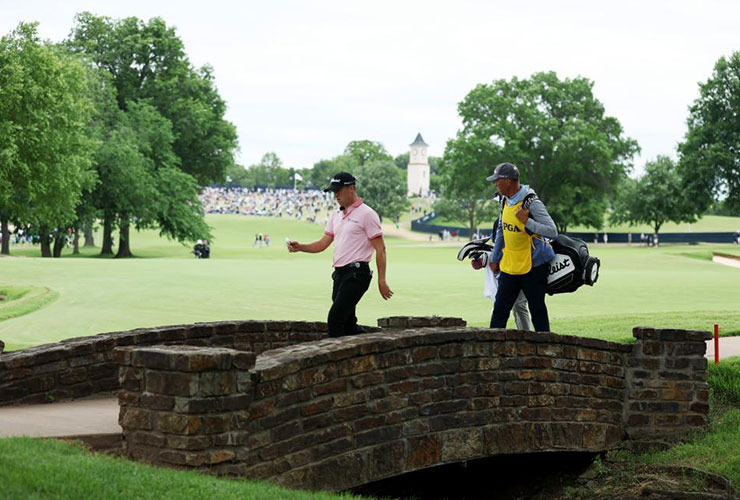 By Shane Ryan
At 5.17pm, Justin Thomas attempted a birdie putt on the 18th hole at the PGA Championship at Southern Hills. If he made it, he would have tied Mito Pereira for the lead at six under. It ran past the hole — uncomfortably past — and about a minute later he made his par. As he walked off, he took a long look at the massive leaderboard overlooking the green. What he saw didn’t look overly promising; Pereira had finished the 16th hole still a shot ahead, and Will Zalatoris was within range too. He tilted his head back, closed his eyes, and ran a hand through his hair before yanking it down — the picture of regret.

He looked upset as he climbed the long hill to the clubhouse, crossed the road, and climbed down the temporary stairs to the scoring tent, but he kept his composure, knowing the cameras were on him all the time. Journalists, TV crews, and security guards watched as he signed his scorecard, and watched the small television. Zalatoris sunk a birdie putt on 17 to tie Thomas at five-under, but more pressing, Mito Pereira hit a towering drive that faded perfectly toward the green at the par-4 17th. It didn’t quite reach the putting surface, but as Thomas watched, he seemed to have an excellent shot at a birdie that would likely clinch the tournament. 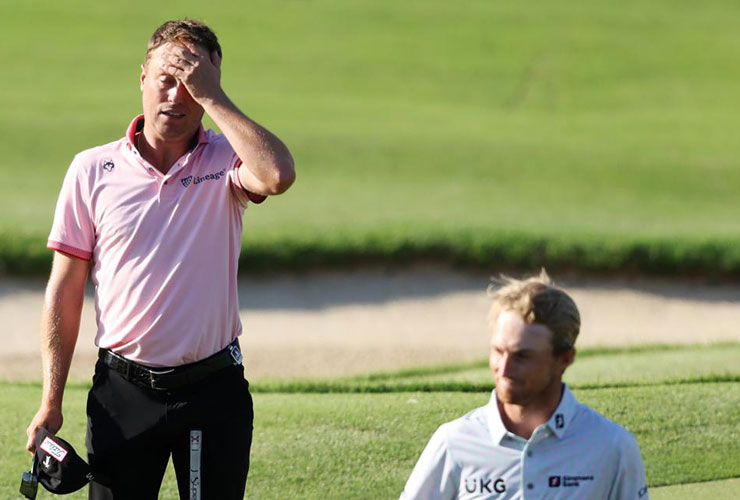 Mark Steinberg, Thomas’ agent, stood on the hill outside the scoring tent. “Bones,” he called, and Thomas’ caddie, Jim Mackay, walked over as Steinberg offered a series of whispered instructions. Stewart Cink, Thomas’ playing partner, came over to offer a fist bump, then patted his back.

At that point, Thomas walked out with his team, trailed by the cameras from PGA digital. “Hope for the best,” he said, to himself as much as everyone else. He went toward a building near the contestant interview area, another temporary structure called “Caddie + Player Support Services.” The cameras tried to follow, but Steinberg planted himself between them and the door, and whatever he said was effective — they remained outside, filming through the window.

Mike Thomas, Thomas’ father and swing coach, came to the door, received a set of instructions, and was back out in a flash, bounding up the stairs and back to the clubhouse. In the lobby of the player locker room, he found Thomas’ fiancee Jillian Wisniewski. Together, they headed back across the road, where a security guard in a cart shouted “cross your fingers, you never know!”

They rejoined Thomas in the service building, but not for long. Mito Pereira’s birdie putt on 17 had stopped just shy of the hole, and at 5.34pm, he hit a horrific drive on the 18th that ended up in the creek on the right side of the fairway. The roar could be heard across the road, and almost the instant it happened, the doors to the support services building burst open. Thomas led the way, his face locked into intense focus, wiped totally clear of the disappointment that it had shown minutes earlier. He and his team marched out to a nearby golf cart. Bones sat up front, and Mike Thomas on the back. In the meantime, Colt Knost with CBS notified everyone that Will Zalatoris had saved a remarkable par to finish at five-under. Thomas now knew he wouldn’t win outright, but the chances of a two- or three-person playoff suddenly looked very good.

They were bound for the range. When journalists caught up to them, Thomas was hitting irons while his father stood behind him, surveying each shot with crossed arms. An Irish and Italian flag whipped to his right, cameras were everywhere, and Bones took his caddie gear off momentarily and looked like the announcer he had recently been. As the drone of the Goodyear blimp hummed above, and Thomas transitioned to his woods, Knost gave them updates on Pereira’s progress. Anthony Witrado of the PGA of America handed a cluster of journalists his phone, and on the screen, Pereira missed a bogey putt from off the green. The man who had led all day and looked like the certain victor after his drive on 17 was now fully out — the playoff would be Thomas and Zalatoris.

Some confusion ensued as the format was hashed out — three holes, cumulative, starting at 13, then 17, then 18 — and Thomas marched up the hill to the putting green. Zalatoris was already there — he opted only to putt — and in all the time they were in close proximity to each other, Thomas never looked at him once. Savvy fans had found the spot, clustered outside the gate, and began shouting their names as they struck their putts.

At 5.50pm, a PGA of America official appeared on the putting green.

He didn’t need to say anything more. They marched through the gate as the fans roared, and jumped into two separate carts with their teams. The cameras scrambled to keep up in their own carts; Thomas continued to resolutely avoid looking at Zalatoris.

At 5.52pm, 35 minutes after Thomas finished the 18th hole and cast a forlorn look at the scoreboard, the carts began to move. They soon disappeared around a corner, bound for the 13th tee and the playoff to decide the PGA Championship.