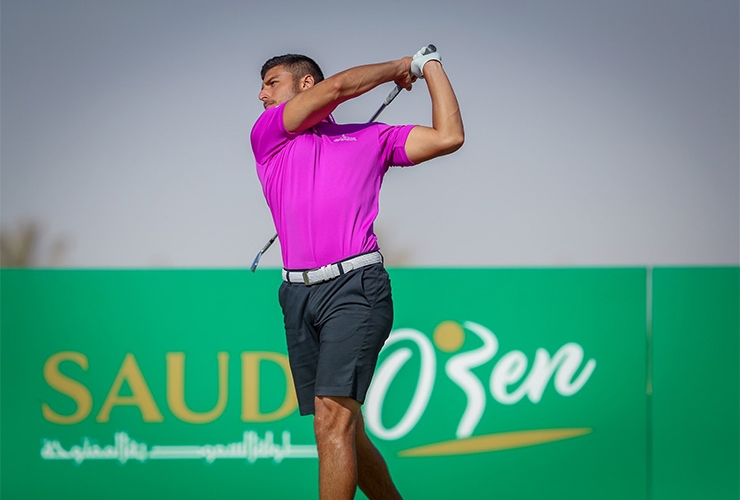 By Matt Smith
While Saudi Arabia continues to establish a new era for golf in the Middle East, thanks to significant investment for professionals and  amateurs alike, there is one man who has enjoyed the ride more than most so far and that is Faisal Salhab.

The 24-year-old amateur rose to prominence in 2021 on the back of a strong showing over the past 12 months. His win at the recent Saudi Open was his crowning achievement, but he has also performed consistently all year including an impressive performance at last month’s GCC Golf Championship in Abu Dhabi, where Salhab was the stand-out performer for Saudi Arabia, taking second spot in the individual standings.

The one man who has seen this growth first-hand is Jamie McConnell at Claude Harmon III Academy at The Els Club, Dubai.

“Having worked with Faisal for more than three years, it has been nothing short of astounding to see not only his improvements during this period, but more impressively his change in dedication, perspective and drive to succeed,” said Jamie.

“Looking back on our first training camp with the team, Faisal always stood out as one of the most talented members of the panel. However, at that point in time he was quite content with simply being a member of the team and competing alongside his friends and countrymen in the local and regional events. Sitting at over 3,000 in the amateur rankings, there were very few aspirations to really push towards the top level or any commitments in terms of real time to golf. Yet that all changed a few months later with one short quip that at the time I didn’t realise would have such an impact on him.

“That camp seemed to change something in Faisal, at the end of it we had a chat and he mentioned that he really wanted to take things more seriously, and that representing his country at the highest level is something which he felt he could certainly achieve. This is something I have heard many times from players but rarely do they follow the necessary actions in order to really see any significant changes.

“Not Faisal … The following week upon returning to Saudi, I knew something had changed. Videos started to arrive — questions, feedback on how his game was progressing. This was a different person. This was a young man who had found his purpose and his drive to achieve the things that we knew he was capable of.

“This began his ascent towards the top 100 in the rankings and that is just the beginning of where he would really like to take his talents. It’s an exciting prospect and one that I really cannot wait to see.

“It can’t go without saying however, there are a number of people that really need to be mentioned including his teammates Saud Al Shariff and Othman Almulla who have paved the way from the outset and continue to work closely with Faisal to get better —  and also his mentor Prince Khalid Al Faisal, who has been a big part of the team’s success in recent times.”

With more and more Saudi activity in the game of golf, we can be sure to hear a lot more of Faisal and the team in the near future.