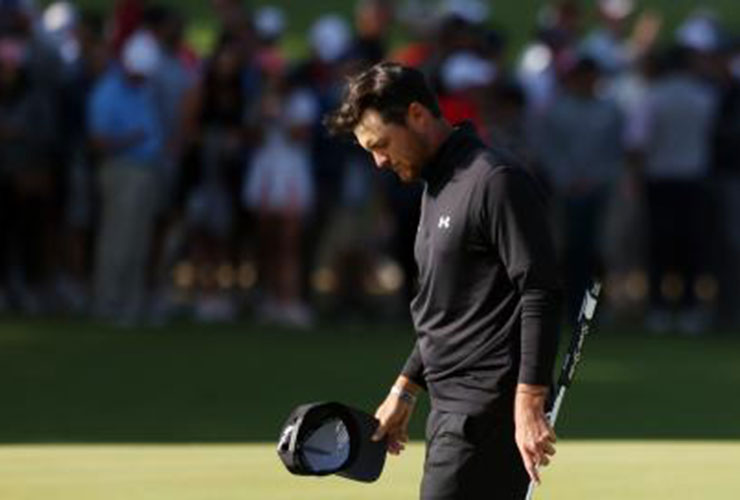 By Shane Ryan
In the blink of an eye, Sunday’s main character was relegated to the realm of trivia. As in, “who led the 2022 PGA Championship through 71 holes, needing just a par on the last to win a surprising major, before driving his ball into a small winding creek, making double-bogey, and not even making the playoff?”

The answer — commit it to memory now, in the face of Justin Thomas’ second major victory — is Chile’s Mito Pereira.

Leading by three at the start of the day, at nine-under, Pereira shot a 75 in a day that doesn’t quite equal the great major collapses of all time, but isn’t too far off, either. At times like these, we’re tempted to look for profound explanations for such a dramatic failure, but all too often it can come down to something incredibly mundane and all the more tragic for its simplicity. Take, for instance, the explanation Pereira offered for his disastrous drive on 18:

“I just wanted to put it in play, and I guess I aimed too far right.”

Dressed all in black, Pereira seemed remarkably composed during his post-round press conference. Moments earlier, in the scoring tent, he leaned against a small podium and watched the television as Thomas and Will Zalatoris began the playoff. It was the same place where Thomas had stood just minutes earlier, watching Pereira hit a tremendous drive off the 17th tee, looking every bit the prospective winner. The reversal was a testament to the sheer speed of life. Now, nobody was watching him except a handful of allies and those whose interest was tinged with sympathy and a bit of necessary voyeurism.

Mito Pereira not only speaks on live TV after that brutal finish, but smiles and laughs. He earned a lot of fans today.

Nevertheless, as he faced the media, there were no tears, no apparent heartbreak, and he even laughed — loudly, and genuinely, it seemed — at a question in Spanish that amounted to, “if you could do something differently what would it be?” It was hard not to wonder if he was in shock or denial, but in the end his even keel felt sincere. He’ll have plenty of thoughts and regrets to deal with later, but for now he deserves credit for standing up and treating this as it should be treated — like an unfortunate sports result, and not a world tragedy.

That was the most illuminating quote the plain-spoken Pereira gave all week, and it’s reminiscent of some of Scottie Scheffler’s quotes from his own Sunday Masters experience. When a reporter asked him whether his birdie putt on 17, which stopped inches or even millimetres away from dropping into the hole, would have been a welcome cushion, he refused to accept the theoretical solace.

After his interview, Pereira headed outside to speak with CBS’ Amanda Renner. His wife hugged him, his agent fixed his collar, and he kept the relentless grin fixed to his face for television, and then again for the Spanish questions back in the media tent. You couldn’t crack him.

When it was over, he walked up a long set of stairs, and waiting near a group of golf carts were a group of Latin American golfers — Abe Ancer, Joaquin Niemann, Sebastian Munoz. They hugged him, they laughed, and a cute dog appeared to lighten the mood. It was a heartwarming moment, if you wanted it to be, until you noticed the Netflix cameras hovering nearby and began to wonder if the moment was a little too perfect … if, in fact, it had been set up.

The point is, not everything is as it seems. Pereira’s composure in the aftermath of what should have been total heartbreak, sprinkled with a few baffling sound bites, like when he called the day a “really good result,” is a performance. It may reflect his true mental state, or it may not, but in the end we have to go back to the simple thoughts, the basic message, to get any sense of his real psychological state. One sentence in particular, a throwaway line in the midst of the surprising composure, would sound banal if it wasn’t so wrenching.

He’ll wish that for a very long time.