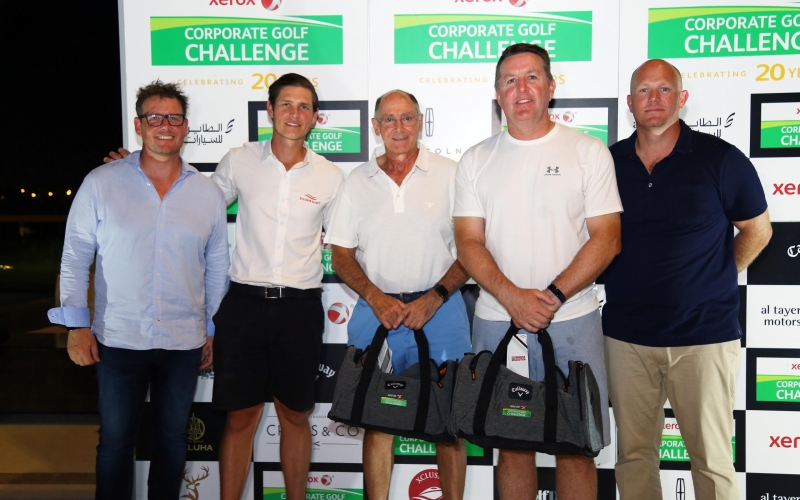 By Kent Gray
Defending champions Hisham Shammas and Paul Abouchacra laid down an impressive marker in the opening event of the 20th anniversary edition of the Xerox Corporate Golf Challenge, navigating the Fire course at Jumeirah Golf Estates in a betterball net score of 62.

Impressed but not clearly intimidated, Kelvin Tayfield and Ernest Hosking have trumped the 19th XCGC champions on Trump Dubai International Golf Club, winning the second qualifier with an 11-under 60.

Tayfield and Hosking easily beat Ashok Kumar and Suresh Nathumal by six strokes in the Lincoln Al Tayer-sponsored qualifier with Shabir Yakub and Anthony Stroud having to settle for third on countback after also signing for a five-under 66.

The winning didn’t stop there for Hoskin who joined Jon Walley, Geoff Walsh and Nicholas Hymas in hitting it within the ‘Lincoln Circle’ on the Lincoln Al Tayer-sponsored 8th hole, a feat that earned each a Lincoln of their choice for a weekend.

Xclusive Yacht’s nearest the pin on the 17th was won by Mike Estafanous.

A round of 72, meanwhile, saw Jon Walley and Stuart Cameron seal the gross title at Trump and join the top four net placegetters in the 20th XCGC grand final in December. The winners of the 18-hole decider will play for the following prizes: