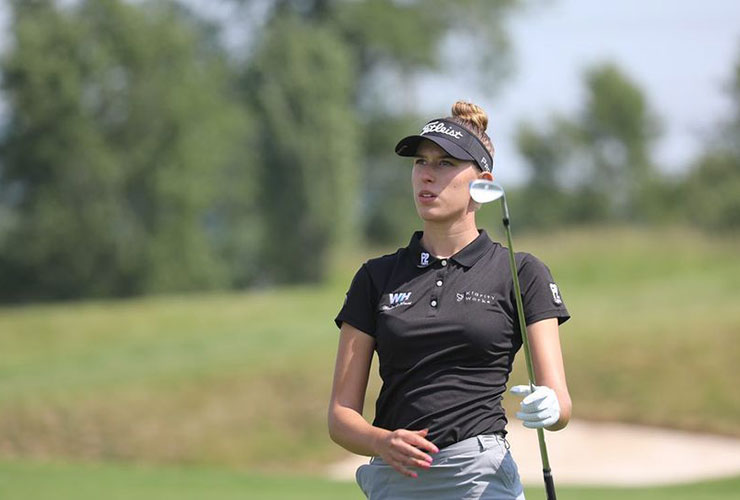 By Matt Smith
Not only did teen sensation Chiara Noja set the golfing world on notice with her storming win at the LET Access Series Czech Ladies Challenge on Sunday, she smashed a world record.

The German 16-year-old took the title by an amazing nine strokes from home hope Sara Kouskova at the Prague City golf course, pocketing €6,000 for her troubles on a dream week on the Ladies European Tour Access Series.

Chiara waltzed into an early six-stroke lead on Day 1, stretched that to 10 on Day 2 and cruised home on Sunday.

Sweden’s Jilia Engstrom had held the record of the youngest winner on the LETAS when she claimed the Ladies Finnish Open in 2018, but Chiara set down a new benchmark on Sunday in some style.

At 16 years, 81 days, the Dubai-based German is head and shoulders above the rest, just as her scorecard proves.

Decided to take this one home 🏆 Winning at 16 years old @LETAccess @AmundiCzech somewhat surreal. I‘m a little overwhelmed with all the love and support I’ve received over the last few days. Thank you to everyone that has supported me to make these dreams a reality.
📷 ACLC pic.twitter.com/JO6JGnlksk

“I was super stressed today, but I stayed calm and collected and on the 18th hole, I thought, OK, I actually won and that was a big moment for me,” Chiara told Gulf News.

Chiara also moves to the top of the LETAS Order of Merit standings with 875.00 points and, obviously, also leads the LETAS Rookie of the Year standings after her second-place finish at the Terre Blanche Ladies Open and T-14 in the PGA Championship Trelleborg in Sweden.