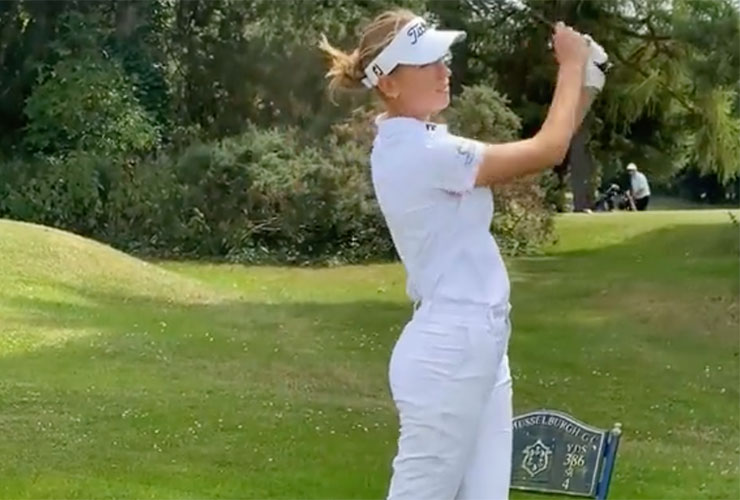 By Matt Smith
Dubai youngster Chiara Noja is in prime position to consolidate her position at the top of the Ladies European Tour Access Series Order of Merit after firing a four-under 68 to join fellow German Patricia Isabel Schmidt at the top of the leaderboard after the opening day of the Trust Golf Links Series – The Musselburgh Golf Club.

The two Germans are one shot clear of the chasing pack heading into round two.

Schmidt set the early pace on the front nine as she carded a birdie on the par-five fourth and holed out for eagle on the par-four fifth hole to make the turn in 33 shots.

“I hit a good drive on the fifth and pitched it in from 70 meters. Sometimes I struggle with the opening rounds so that eagle got me well set for the rest of the round,” said the co-leader who was in the same position a fortnight ago.

“My takeaway from that tournament in France is to just continue playing like I did today and to not be shy hitting driver even if someone else does not.

“Driver is the best club in my bag, I hit it a lot today and it worked well,” added the 26-year-old.

The eighth player on the LETAS Order of Merit made three more birdies on the back nine and dropped two shots before matching the round of the day.

Her compatriot Chiara Noja was the first one to set the clubhouse lead at four-under-par as she only had one bogey on her scorecard on the ninth hole.

Taking the chances on the par fives second and seventh saw the Dubai-based teenager making the turn in 35 strokes before dropping three more birdie putts on the back nine.

“It was very steady today. Nothing felt incredibly awesome or bad, so it was just plodding along, trying to take the opportunities, and avoid mistakes,” commented the 16-year-old.

“I played solid off the tee trying to put myself into a good position each time. I hit the green in two on all par fives so I’m happy I took the opportunities there.”

The LETAS Order of Merit leader has put herself in contention once again after securing her maiden professional title and finishing runner-up twice this season.

“I’m happy with today’s round heading into tomorrow. We are going to try and keep the top position until the last round is over.”

English duo Gemma Clews and Amy Taylor tie the third place at three-under 69 while Czechia’s Sara Kouskova is another shot back after round one in Scotland.

At one-under-par 71 are Thailand’s Arpichaya Yubol, Scotland’s Kirsty Mitchell, and Italy’s Clara Manzalini as the three share the sixth spot.

Wales’ Lea Anne Bramwell and Dutch Lizzy Peeters round out the top 10 at level-par.

Kicking on from where she left off in Saudi, Pedersen closes 2020 in historic fashion