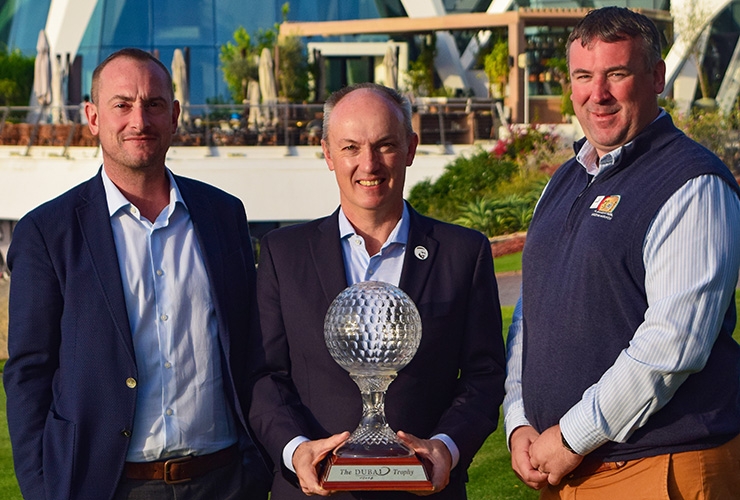 By Kent Gray
With the UAE PGA professionals well “up for it” and the Emirates Golf Federation amateurs weakened, perhaps the Dubai Golf Trophy isn’t the foregone conclusion some considered it might be.

The teams for the 20th edition of the Ryder Cup-style matches have been released but it’s the big names missing that will have amateur captain Craig Vance sweating and his pro counterpart Tom Buchanan quietly optimistic.

Gone from the EGF team that made it an amateur three-peat last year are the injured MENA Tour history maker Rayhan Thomas and the regional mini-tour’s ‘Three Musketeers’ – Josh Hill, Toby Bishop and Arjun Gupta who are all understood to be busy on European campaigns.

“It should be a lot tighter this year with a few of my keys players out and I know Tom’s lost a couple of his players as well,” said Vance, downplaying talk of a fourth successive victory for the amateurs.

Buchanan has a team of professionals in form, including Dubai Creek’s Adam Burwood who recently won the UAE PGA Championship to clinch the UAE PGA Order of Merit title. But the Scotsman, fresh from winning the UAE PGA Matchplay title himself, isn’t getting ahead of himself.

“It’s going to be a tight affair as it always is. The amateurs are very strong. They have used their picks very well. However, our guys are up for it. We are on a losing streak and hopefully we can turn it around this year”.

Vance isn’t waving the white flag either, pointing to the quality of the coaching available across the UAE and higher intensity during amateur tournaments as a huge plus for the amateurs.

“We play in events across the region and you now have to score under-par, or significantly under-par to even have a chance of winning,” Vance said. “This shows how much the amateur game in the region has developed in recent years and it had certainly been a contributing factor to our recent successes in the Dubai Golf Trophy.”

There’s some juicy match-ups for Saturday morning’s foursomes on the Majlis at Emirates G.C.:

The EGF amateurs won last year’s Dubai Trophy 19-13 but the UAE PGA team are still comfortably ahead in the overall stakes having won 14 of the previous 19 matches dating back to the year 2000.