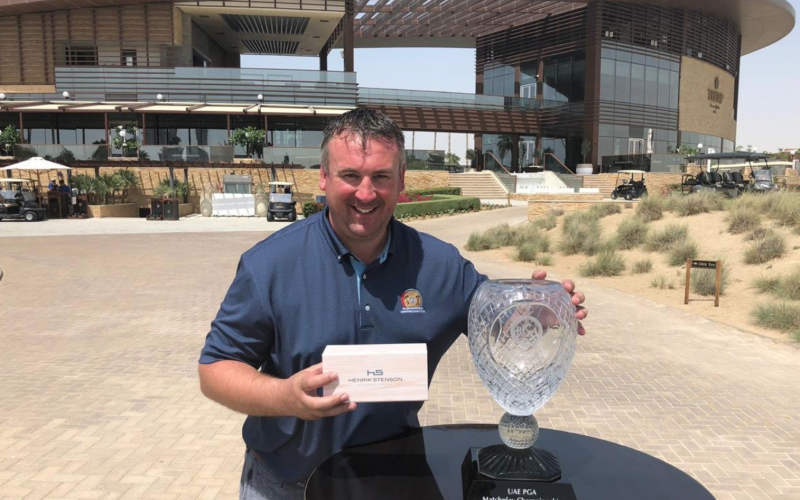 By Kent Gray
Tom Buchanan sure hopes history doesn’t repeat itself after he claimed his third UAE PGA Matchplay Championship at Trump International Golf Club, Dubai on Sunday. The 39-year-old Scotsman kicked on from a fast start to beat Trump pro Mike Bolt 3&2 in the 18-hole final to back up his previous triumphs in 2013 and 2015.

It was the serial UAE PGA Tour winner’s second title of 2018-19 in just six starts after a promotion to Operations Manager for the wider Al Ain Equestrian, Shooting & Golf Club recently has curtailed his golf this year.

After earlier edging Jumeirah Golf Estates’ Jordan Gallagher 1 up in a tense semifinal, Buchanan is chuffed to be taking some decent form into this week’s annual Dubai Trophy where he’ll captain the UAE PGA team against a selection of EGF amateurs chasing their fourth straight victory in the Ryder Cup-style matches.

Buchanan just hopes he doesn’t suffer the same fate as his predecessor Ryan Smith who won last year’s UAE PGA Matchplay crown only to suffer a thumping in his singles match at the Dubai trophy as the amateurs sealed their hat-trick 19-13.

The respective Dubai Trophy teams and first-round pairings are due to be announced on Tuesday.

“Yeah we are on a bad run at the moment,” captain Buchanan conceded. “It’s always a tight affair and hopefully we can get it back this year.

“The Dubai Golf Trophy will be special as always and especially in its 20th year and as captain. The amateurs are strong and have more depth in their picks compared to us but we are all looking forward to it and hopefully we can get the win.”

Buchanan, who had previously won at The Track, Meydan Golf this season, drove the ball well against Gallagher to set up his advance the final where he played the outward nine in three under to give Bolt little chance.

“I was three up through nine, played really solid, then just kept applying pressure. Mike’s putter was cold on the day sadly for him but two very enjoyable games and to win it for the third time is great.”