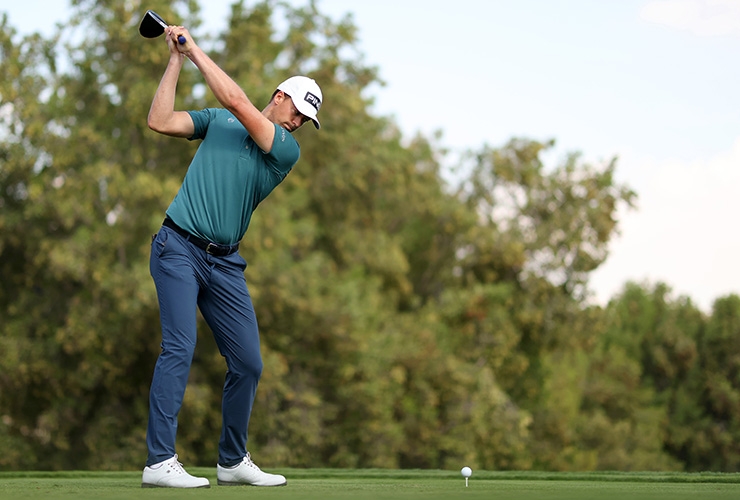 By Matt Smith
Victor Perez maintained his fine form at the Porsche European Open in Hamburg on Thursday as he signed for a 69 to sit two shots off the lead.

The Frenchman, who defeated Ras Al Khaikah champion Ryan Fox to claim the Dutch Open on Sunday, sits on three-under alongside Dubai-based Spaniard Adri Arnaus and five others.

The 29-year-old Perez carded five birdies and two bogeys in a first-round 69 to sit two back of Li Haotong and Joakim Lagergren.

“It felt really solid,” said Perez. “We got the best of the conditions, it was nice and calm when we started. The course plays really long after the rain yesterday. It’s about just driving the ball on the fairway and give yourself as many chances. Those par fives, you used to think they were birdie holes for sure. But they are definitely not here. You have to hit sometimes two great shots to give yourself a wedge. It’s a different mentality.”

Li added: “My approaches were really good today. I had a lot of birdies on the tough holes as well. I found my rhythm compared to last week. I just tried to play my golf and my game. I enjoyed it out there.”

Lagergren commented: “I’m very pleased. It’s a really tough course. It’s a long one and you don’t get any roll on the fairways at all. There’s some shots to get there, but if you’re a little bit off, it’s tough.”

You might also like:
Analyzing the 42 players who have signed up for LIV Golf
LIV Golf: All you need to know
Your top players to watch at LIV Golf Invitational
DJ to headline LIV Golf Invitational
Rory McIlroy says LIV Golf players should not be punished harshly
PGA players defend jump to LIV Golf Invitational
Looking back at the Dubai Golf trophy with captains and players
Shiv Kapur hails Asian Tour opportunities thanks to LIV Golf and Saudi Golf
The Gulf Club: The latest golf news from around the UAE
Meet Malak, the first Arab to play at US Women’s Open