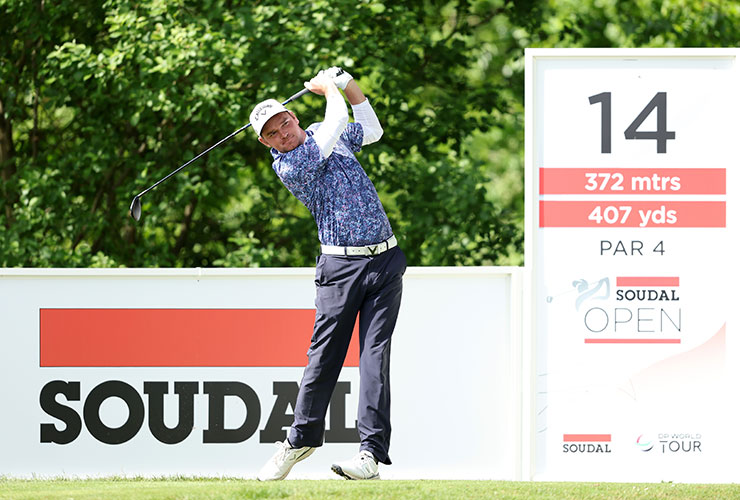 By Matt Smith
It was an English march at the Soudal Open in Belgium as Dale Whitnell, Sam Horsfield and Callum Shinkwin led the way after the first round.

They each fired opening 65s at Rinkven International Golf Club on Thursday morning, and with no-one able to catch them in the afternoon, they head into the second round one clear of the chasing pack.

It had looked as though Whitnell might prove impossible to catch on day one, after he notched nine birdies in his opening 16 holes, before a double bogey-bogey finish meant he had to settle for a 65.

A pair of amateurs were in the mix, too, with Charles Roeland firing a 69 and 14-year-old debutant Lev Grinberg shooting a 70 on his home course, while home favourite Thomas Pieters also opened with a 69.

“I played really nicely,” said Horsfield. “I kept the ball in play, this is a golf course where positioning is quite important off the tee and I was able to position it nicely to give myself a lot of good looks, and rolled in a few.

Whitnell added: “You can only take the positives really. I have been sort of feeling like the game has been getting there, I have struggled the last six weeks or so with a bit of form and swing changes, it has not been quite where I have wanted it to be, but the first 16 holes was flawless.

“I am making a few changes with Craig Lockwood, my coach, but it’s minimal and nothing massive. I missed the cut the last three weeks by three shots, two shots, one shot, and I was six-over par for 21 holes at The Belfry and got back to one-over, almost made the cut. I am trying to focus on the process rather than the outcome.”