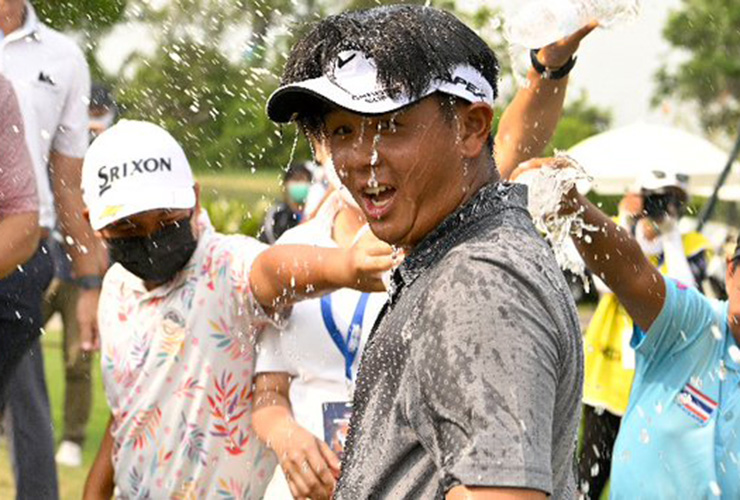 By Matt Smith
Thailand’s teen golf sensation was not to be denied his moment in history on Sunday as the 15-year-old Ratchanon Chantananuwat became the youngest male player to win on any of golf’s major tours.

The amateur fired a seven-under-par 65 in the Trust Golf Asian Mixed Cup at Siam Country Club in his homeland to finish on 20-under, two clear of South Korea’s Joohyung Kim.

Kim — hardly a veteran of the game at 19 himself — returned a 64  to take second spot ahead of American Paul Peterson and fellow Korean Bio Kim.

Ratchanon at 15 years old and 37 days takes over the youngest winner mark set by Japan’s Ryo Ishikawa, who was 15 years and eight months when won the Japan Tour’s 2007 Munsingwear Open KSB Cup.

On the Asian Tour, Thailand’s Chinnarat Phadungsil had been the previous youngest champion, having claimed the 2005 Double A International Open when he was 17 years and five days old.

A host of players were in contention on the back nine of the inaugural mixed tournament, co-sanctioned by the Asian Tour and Ladies European Tour, where both male and female players competed for the same trophy and $750,000 purse.

But Ratchanon, playing in the penultimate group, made the decisive move when he birdied 14 and 15, for a three-shot lead over the chasing pack.

Kim clawed back within one shot with eagle on the 18th before Ratchanon holed out for birdie on the last.

“I am very excited, but I felt a lot of pressure,” said Ratchanon.

“I got to be honest, I got pretty lucky, I had hit two or three terrible drives. I saw that [Kim eagled] and was not surprised, he pulls off that stuff all the time. It put pressure on me but I tried not to look at it too much. I definitely have a lot of people to thank.”

The rising star, who is still a school student in Bangkok, has no plans to turn professional and will compete in the upcoming SEA Games in Vietnam.

He said: “This has been my plan all along. I enjoy learning. I have talked to a lot of players, and they have all said go to college.”

He also became the fifth amateur to win on the Asian Tour and first since 2009.

Thai teen sensation @ratchanon_tk achieved the impossible today when he claimed the #TrustGolfAsianMixedCup to become the youngest male winner on one of the game’s major Tours.

Kim, the reigning Asian Tour Order of Merit champion, had the consolation of receiving the $135,000 winners’ cheque, as Ratchanon is an amateur.

“I made a careless mistake on 17 but recovered well with the eagle but let’s face it, TK deserves this. There is no stopping him. But this week has given me a lot of confidence for the season ahead,” said Kim.

Four-time Asian Tour winner John Catlin from the United States returned a 67 to finish in outright fifth, while in a tie for sixth was 17-year-old Chanoknan Angurasaranee from Thailand.

After rallying to make the cut, Saudi Arabia’s Othman Almulla struggled on Sunday with a 78 and had to settle for a six-over total and 75th spot.

Competitors move to the Trust Golf Asian Mixed Stableford Challenge next week, to be played at the same venue and boasts the same prize money.

The inaugural tournament will use the Modified Stableford scoring format.