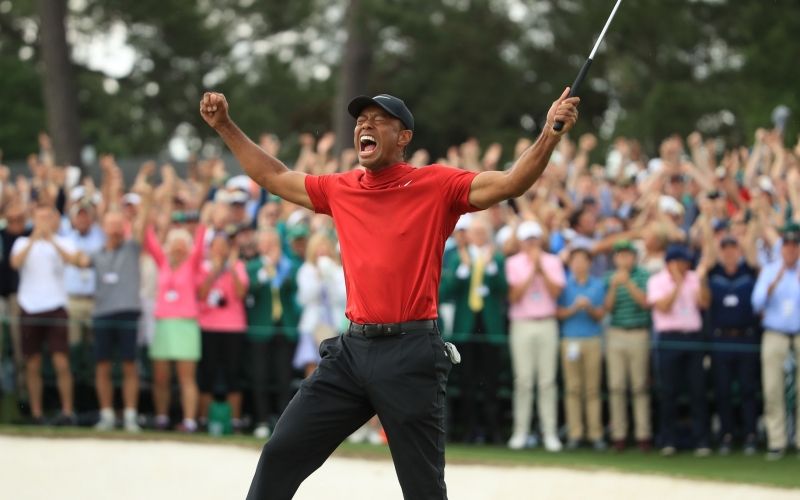 By E. Michael Johnson
When Tiger Woods won the 1997 Masters, he re-wrote a good portion of the Masters history by breaking 20 records and tying seven others. In the ensuing 25 years, Woods has continued to match or erase marks at Augusta National with remarkable frequency — it’s what happens when you win the event five times. Although some of his records from 1997 have since been broken, Woods’ name is still attached to 36 records in the tournament’s media guide. Oh, and of those 27 records from 1997, 10 still stand. Here, appearing in chronological order, is a list of all Woods’ Masters records, some of which he is likely to hold on to for a long time, if not in perpetuity.

Highest first nine by a champion

Woods’ 40 on the opening nine of his first round as a professional at the Masters in 1997 is well documented and one of the few negative blips for him in the tournament’s record book.

Woods was only 21 years, three months and 14 days old when holding the 36-hole lead at the 1997 Masters. For those wondering why he also isn’t the youngest 54-hole leader, Jordan Spieth was 20 years, eight months and 17 days when he held a share of the 54-hole lead in 2014.

Woods opened a nine-shot advantage over Costantino Rocca after three rounds in 1997. 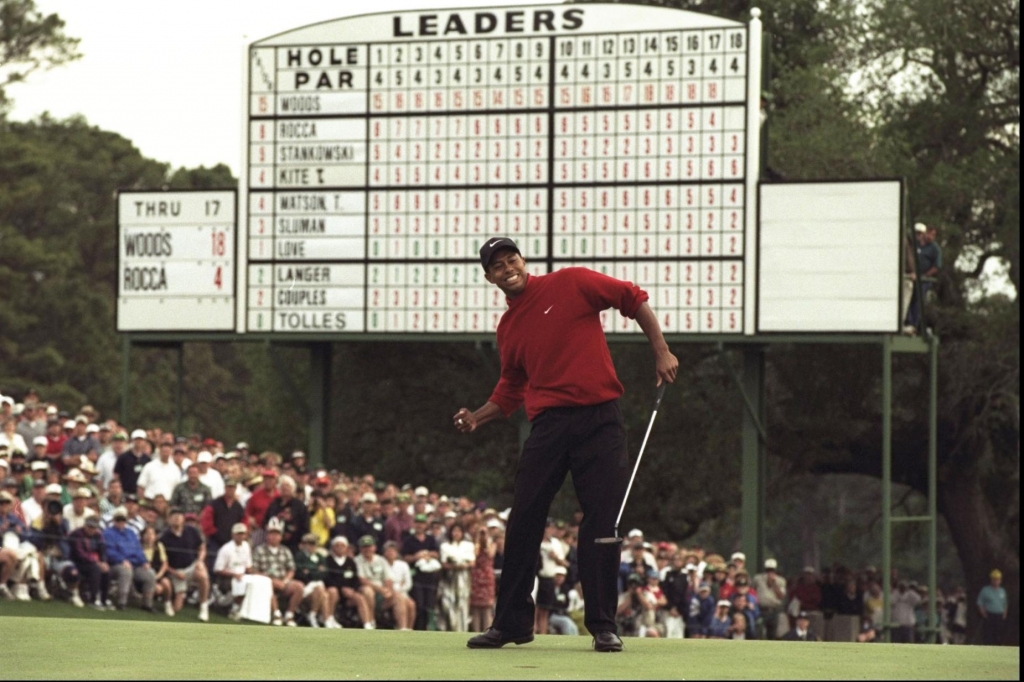 Most under par in one Masters, second nine

Most 3s in one Masters

In his breakthrough 1997 victory, Tiger made 26 3s courtesy of two eagles, 10 birdies and 14 pars. Impressively, he matched his own record in 2005 with a slightly less exciting 13 birdies and 13 pars. Woods demolished the previous mark of 22 held by Horton Smith in 1936 and tied by Tom Watson in 1977.

Woods left Tom Kite a dozen shots in arrears in 1997, breaking the nine-stroke cushion Jack Nicklaus enjoyed with his 1965 win. The next best since then is the five-stroke victory by Dustin Johnson in the November 2020 Masters.

Woods was 21 years, three months, 14 days when he won the 1997 Masters, supplanting Seve Ballesteros, who was 23 years, four days old when he won in 1980, as the tournament’s youngest champion.

Masters champions who played the tournament as an amateur 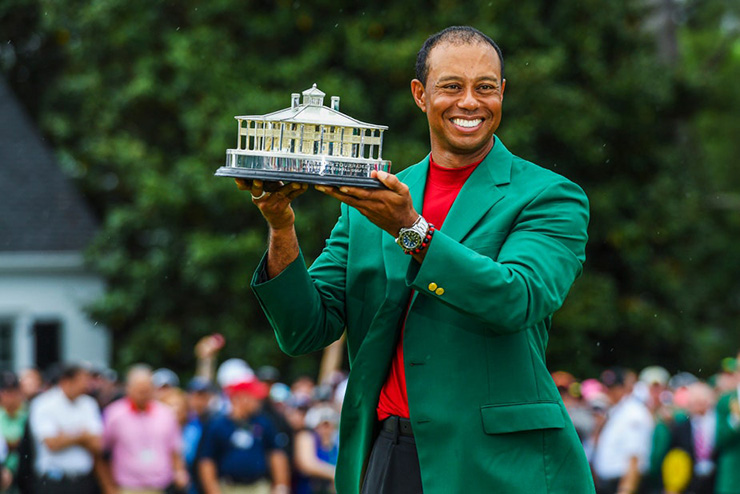 Lowest round by defending champion

Champions winning other majors in the same year

Eighteen times a player has won the Masters and another major in the same year. Woods has done it twice, taking the US Open in 2002 and Open Championship in 2005.

Three Masters win in a lifetime is a rare feat. Doing so in just eight starts (which Woods did when he won in 2002) ties you with some pretty heady company, namely Arnold Palmer and Nicklaus.

The old saying that you can’t win the tournament on Thursday but you can lose it normally applies to those who open with a 74 and stand seven shots behind the leader. But Woods matched the largest comeback after 18 holes in tournament history when he won in 2005 under just that circumstance. Faldo also came from seven back after the opening round in 1990.

Making seven birdies in Round 2 and nine more in Round 3, Woods set the mark for most birdies in consecutive rounds at the Masters at 16 in 2005. Anthony Kim tied the record in 2009, also in the middle two rounds. 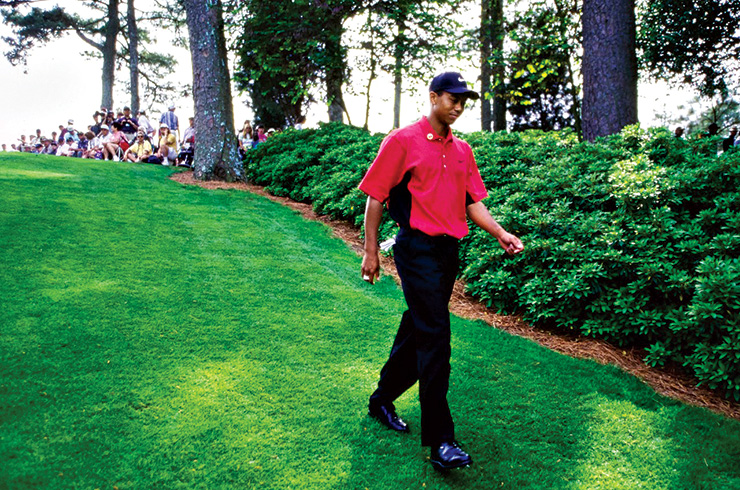 Part of Woods’ birdie barrage in 2005 was a string of seven straight from holes 7 through 13 in the third round, tying Steve Pate’s mark from 1999 that was on the same stretch of holes and also in the third round.

Least number of pars by a champion

Of course, all those birdies in 2005 helped lead to another record — the fewest number of pars by a Masters winner with 36.

Players to win after holding the 54-hole lead

There have been 46 players to lead after three rounds and go on to win. Only three have done it four times: Palmer, Nicklaus and Woods, who joined that group in 2005.

Most eagles in one Masters

Despite the par 5s presenting numerous eagle opportunities for Masters participants, only three players have made four of them in one Masters. In 2010, Woods joined Bruce Crampton (1974) and Dustin Johnson (2009), including a hole out for eagle at the par-4 seventh hole in the final round.

Most under par, one Masters, hole 15

Bookend eagles sandwiched two birdies in the middle rounds to put Woods six under par on the 15th hole in 2010, currently tied with eight others. 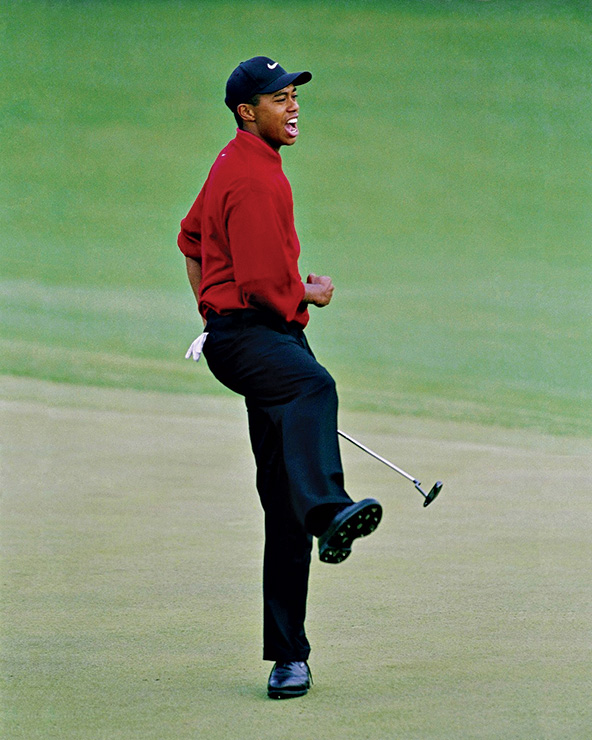 Most consecutive rounds of par or better

Shooting par or better at the Masters is always an accomplishment. But to do it for the equivalent of four straight tournaments? That’s what Woods did when he posted 16 consecutive rounds of par or better from 2007’s third round through to 2011’s second round.

Most under par, one Masters, hole 6

When he won by coming from behind after 54 holes in 2019, Woods became the 28th champion to do so.

Seeing how only two people have won at least five Masters, there isn’t a lot of competition here. Woods, however, at 43 years, three months, 15 days when he won in 2019 takes the honour over Nicklaus.

Considering a total of 280 would win or get you in a playoff for about half the Masters played to date, it’s a pretty good target to shoot for. No one has reached or bettered that total more often than Woods — who last did it in 2019 — and Mickelson, who have each done it eight times. Give Woods the tiebreaker here with only one 280 total compared to three for Lefty. 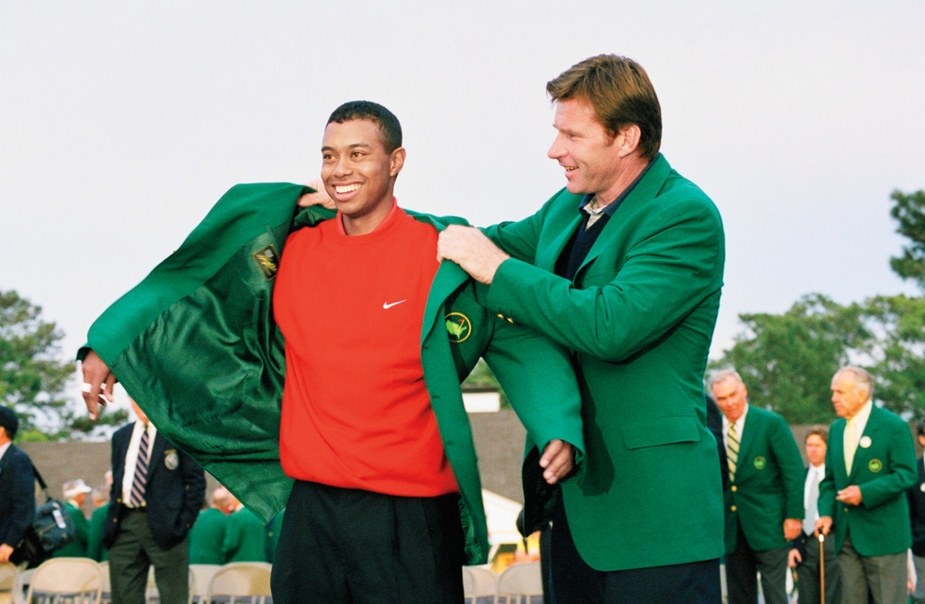 Although he needs two more to tie Player and Fred Couples for the longest cuts-made streak at 23, Woods does own the longest active streak at 21, having never missed a Masters cut as a professional since his debut in 1997 through his last appearance in 2020.

Woods’ 70.87 scoring average over 90 rounds is almost half a stroke better than Mickelson, who owns the second-lowest mark.