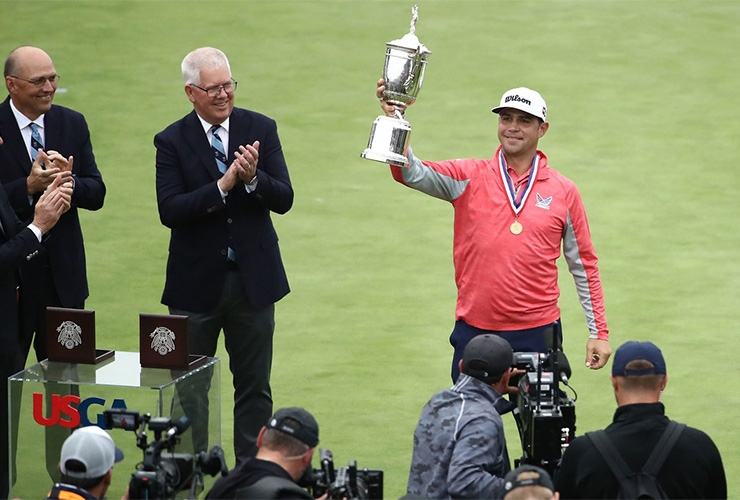 By Dave Shedloski
Gary Woodland once caught a knee in the throat in a high-school basketball game in his native Topeka, Kan., that landed him in the hospital with a collapsed trachea. Three days later, he led his Shawnee Heights team to victory with 20 points.

“The guy was trying to dunk on me,” Woodland said, recalling why he defiantly stood his ground.

His windpipe might have been tightening Sunday in the final round of the 119th U.S. Open, but he wasn’t going to choke. He wasn’t going to let anyone dunk on him, not even two-time reigning U.S. Open champion Brooks Koepka.

Showing the kind of hard-nosed resolve typical of a U.S. Open champion and putting the right touch on shots both long and short in the closing stretch, Woodland stood up to the charge of the irrepressible Koepka and outplayed his final-round partner Justin Rose, another U.S. Open winner, to capture his first major championship.

In the dank, chilly air hard by the Pacific Ocean, Woodland executed with stone-cold efficiency, carving out a two-under-par 69 at Pebble Beach Golf Links to beat Koepka by three strokes. His 30-foot birdie putt on the iconic 18th hole provided an appropriate conclusion, consistent with the remarkable hole-outs he executed over the final three rounds when he never relinquished the lead.

When his ball disappeared, Woodland raised both arms and then delivered a muscular fist pump, an emphatic release of emotion for a player who had failed repeatedly to close out a tournament and had only recently put himself on the radar in major championships.

“And the question about if I ever dreamed of making the putt on the last hole of a U.S. Open when I was a kid, no, I didn’t, but I hit a lot of game-winning shots on the basketball court when I was a kid. And that’s what I did.”

A member of two state champion basketball teams, Woodland did it after clanking more than a few shots off the rim—or in this case, the edge of the cup. Woodland entered the final round one stroke ahead of Rose and with a proven record of disappointment with a 54-hole lead. Until Sunday, he had failed to win after each of the seven occasions when he either shared or led outright after three rounds. Until Sunday, he had never finished better than 23rd in eight U.S. Open appearances.

RELATED: The biggest story at Pebble Beach was the one that didn’t happen

Making the victory even sweeter, coming on Father’s Day, was that it provided a reminder of what he had lost. Two years ago, Woodland’s wife Gabby suffered a miscarriage of one of the two twins she had been expecting. The surviving son, Jaxson, who was born 10 weeks premature, turns two next week. And Gabby is expecting identical twin girls in August. So much has changed since what Woodland called “the toughest year of my life.”

Winner in four of his last eight majors, Koepka enjoyed a dream start by one-putting his first five holes for four birdies. He only gained two strokes on Woodland, however, who answered the barrage with a birdie at Nos. 2 and 3. He also answered Rose’s opening birdie that briefly tied things up. But the Englishman, who had been riding a hot putter, couldn’t continue to offset his substandard ball-striking and fell away, slipping to a 74 and ending up in a third-place logjam with three others at seven-under 277.

“He stayed calm all day. He looks calm all the time. You never know what is going on. He was unflappable,” Rose said of the winner. 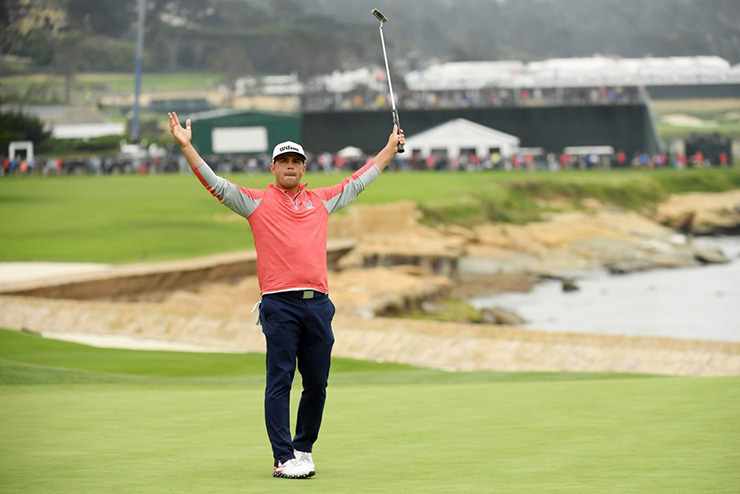 Woodland celebrates on the 18th green after winning the 2019 U.S. Open. (Ross Kinnaird)

That left the championship to Woodland, a three-time winner on the PGA Tour, and Koepka, the major machine, who clawed within a stroke when he birdied the 11th and Woodland bogeyed the par-3 12th after missing the green wide right.

The crucible moment came at the par-5 14th when Woodland struck a powerful tee shot that left him 263 yards to the hole. “It was either we’re going to lay up or we’re going to go for it, and we sat there and thought about it for a while and said, let’s go, we’re out here to win,” Woodland said.

RELATED: The shot that won Gary Woodland the U.S. Open might get you suspended at your club

His towering 3-wood cleared the perilous front bunker by a few feet and settled in the left fringe. A chip and a three-foot putt, and Woodland’s lead were restored to two strokes. Which he maintained expertly at the par-3 17th when he fanned another iron. The ball settled in the lower-right portion of the hourglass-shaped green, some 90 feet from the pin, leaving him no choice but pitch over the tier bisecting the green. Using his 54-degree wedge, Woodland landed the shot just over the hump and the ball checked up two feet from the hole.

“The 3-wood at 14 was, I think, what gave me the confidence to even execute the shot on 17,” said Woodland, who came into the championship ranked 25th in the world. “There’s a lot that could have gone wrong. To execute that shot under the pressure, under the situation, that shot gave me the confidence. Really going in I felt better after hitting that shot on the golf course today than I had in a long, long time.”

“I gave it my all. I give it my all every time and sometimes, like this week—it happened at Augusta [in the Masters]— it’s not meant to be,” said Koepka, who closed with a 68 for his second runner-up finish this year to go with his second straight win at the PGA last month. “Gary played a great four days. That’s what you’ve got to do if you want to win a U.S. Open, win a major championship, and hats off to him.”

For Woodland, who said his mental approach “was as good as I’ve ever been,” it appeared it was meant to be when he capped a second-round 65 on Friday, tying the low round in a U.S. Open at Pebble Beach, by dropping an excuse-me 50-footer on the par-4 ninth, his final hole of the day.

His nine-under 133 through two rounds bettered Tiger Woods’ 36-hole score from 2000, and when he followed with a 69 on Saturday, his 11-under 202 total through three rounds tied the third-lowest 54-hole score in U.S. Open history. During that third round, Woodland performed more magic, chipping in for par from 35 feet at the 12th after half-shanking a recovery from deep grass just outside the front bunker, and then sinking a 40-foot par putt on 14 after four hacks getting to the green.

Last August Woodland set the 36-hole scoring record in the PGA Championship at Bellerive Country Club in St. Louis. He got outplayed by Koepka in the third round, but he did finally secure a top-10 finish in a major—his first in 28 tries. Now in his 31st major, he’s a champion.

The only thing that means more to him is fatherhood. “Being a father now puts life in perspective,” he said. “My whole life it’s all been about trying to win. And now I’m trying to make a better life for my son than I’ve had. Today is so special from that standpoint of being a father and, hopefully, someday he can even see this and realize that anything is possible.”