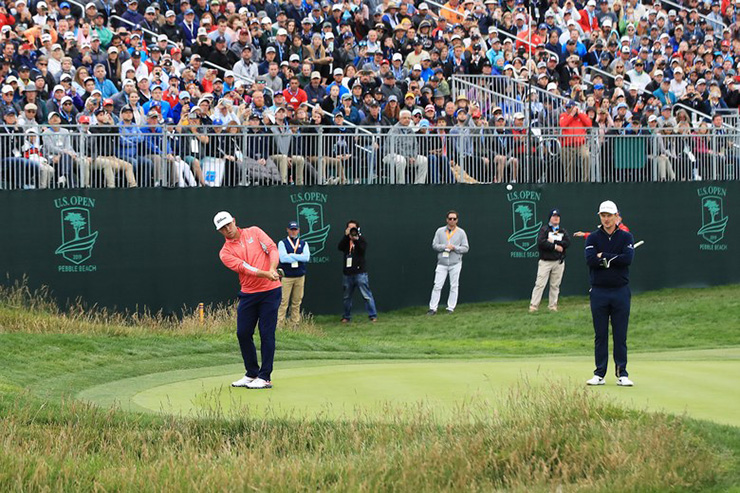 By Joel Beall
Gary Woodland is known as a basher, 200 pounds of Midwestern might. That power was evidenced at Pebble Beach, Woodland ranking fifth in the field in driving distance and 13th in strokes gained/off-the-tee.

But for all of Woodland’s strength, it was his short game that propelled him to glory.

Woodland, who ranks 150th on tour in strokes gained/putting, finished second in that category at the 2019 U.S. Open, gaining 8.29 strokes over the field with his flat stick. And his wedge work was pretty nifty too, which included the tournament-sealing shot on the 17th hole.

Nursing a two-stroke advantage over Brooks Koepka, the 35-year-old Woodland flared his tee shot on the 208-yard par 3. Though his shot found the green, he was 90 feet away from the pin. Worse, he didn’t have a clean look at the hole, with ridges and protruding rough standing in his way.

“If I putted it, I don’t think I could have got within 20 feet,” Woodland said after his round.

That left Woodland with one option: chipping it off the green, a 64 degree wedge his weapon of choice.

And his pitch was a beaut, coming to rest two feet from the cup.

When he needed it most.@GaryWoodland wows with the wedge.

Woodland pointed out it’s a shot he was specifically working on earlier in the week with coach Pete Cowen, giving him the conviction to pull it off.

“That’s what I was thinking about when I was standing over it,” Woodland said. “And it came out perfectly.”

Woodland also acknowledged coach Randy Smith, who helped construct a foundation when he first got out on tour in 2005.

“My short game was really what was really bad, to be honest with you,” Woodland said. “And so my whole deal was I had to hit chips off putting greens all the time, and there were some times where superintendents weren’t a huge fan of me. But I’ve hit a lot of chip shots off putting greens, and I credit that to Randy Smith.”

Clearly, the efforts paid off. Just don’t try it at your home course. If superintendents were mad at a tour pro, imagine how they’d feel toward a chop like you.