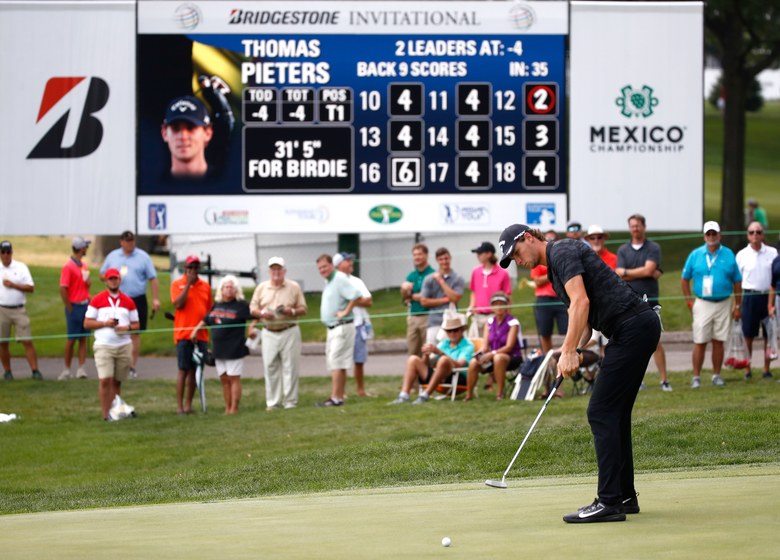 By Christopher Powers
When the pairings were released for the first round of this week’s WGC-Bridgestone Invitational, one in particular caught the eye (and probably yours too): Jordan Spieth, Rory McIlroy and Jason Day. For the most part, the group delivered, with McIlroy and Spieth posting three-under 67s. But they are all chasing the young Thomas Pieters, who carded a bogey-free, five-under 65 and leads by one at Firestone Country Club in Akron, Ohio.

Starting off the 10th tee, Pieters, 25, began his round with four straight pars, then hit his 172-yard approach shot to two-feet at the par-4 14th to tap in his first birdie of the day. At the par-5 16th, he again hit his approach to within tap-in range for another birdie and made the turn in two-under 33. The Belgian added three more on his back nine, including one from 31-feet on the par-4 ninth to cap off his round.

It’s just Pieters 11th start on the PGA Tour season, and he has made the previous 10 all count, including a T-2 finish at the Genesis Open, a T-5 at the WGC-Mexico and a T-4 at the Masters.

One back of Pieters is Russell Knox, who posted a four-under 66 that featured an eagle, four birdies and two bogeys. The Scotsmen got off to a fast start this season, collecting three top-10s before May. But since he finished T-11 at the RBC Heritage, Knox, 32, has struggled. He’s missed four of his last seven cuts and finished no better than T-37.

Spieth, who just turned 24, is still in search of his first World Golf Championships victory. The Bridgestone presents one of his better opportunities to do so, as he’s finished T-3 and T-10 in two of his three appearances at Firestone, plus he’s coming off wins in his last two PGA Tour starts, including his victory at the British Open.

Despite a hectic few days leading in to Thursday’s opening round, McIlroy built off his momentum from Royal Birkdale with another under par round. The Northern Irishman has been excellent at the WGCs this season, finishing T-4 at the HSBC Champions and T-7 in Mexico. He’s also won two of them in his career, the first coming in 2014 at the Bridgestone.

RELATED: Rory split with caddie ‘to preserve a personal relationship’

Also at three under are Bubba Watson, Kevin Kisner, Ross Fisher and Jon Rahm. Through 15 holes Rahm sat at just one under, but then made a rare eagle on Firestone’s “monster” par-5 16th hole, making him just the second player to do it since 2008.

World No. 1 Dustin Johnson carded a two-under 68 and is just three shots back.