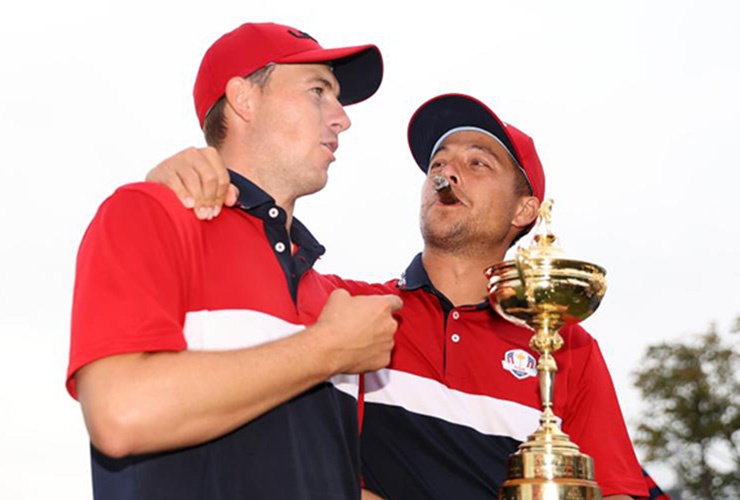 By Alex Myers
AUGUSTA — If there’s a silver lining regarding Tuesday’s afternoon washout at Augusta National, it’s that it happened on Tuesday. To be clear, we’re not in the clear yet when it comes to weather, but the forecast for the rest of the week looks much better. And the pairings for Thursday and Friday look even better than that. Fingers crossed I get to leave the media centre again at some point.

On that topic, we’ve picked our seven favourite threesomes to watch in the first and second rounds of the 2022 Masters. And we even ranked them, because, well, what else do we have to do today? (All times ET.)

Yeah, yeah, yeah, there are other golfers playing this week besides Tiger, but how could we not start with the five-time Masters champ? Especially with him paired alongside major runner-up machine and one of the best young players in the game who already won against a major-calibre field earlier this year at Riviera. But, yeah, with all due respect to Louis and Joaquin: TIGER, TIGER, TIGER!

Would you believe golf’s ‘Golden Child’ in Spieth is the old man of this star-studded group that includes the reigning Olympic gold medallist in Schauffele, as well as the current world No. 4 Hovland? Time flies. Both Spieth and Schauffele, victorious Ryder Cup teammates last autumn, have experienced heartbreak here as well, while the 24-year-old Norwegian is hoping to contend for a first time. Spieth, meanwhile, thinks he’s flying under the radar because of Tiger: “I don’t even think I’m a top-10 odds (guy),” Spieth said, “so I didn’t feel any pressure anyway.” Except the 2015 champ has the sixth-best odds. Nice try, Jordan.

The world No. 1 and reigning US Open champ, the reigning FedEx Cup champ, and the reigning rookie of the year on the PGA Tour. Now that’s the good kind of ‘RAIN-ing’, am I right? Sorry. We’re just pretty darn excited for this tournament to get underway.

Is anyone in the field benefiting more from Tiger taking (back) the spotlight than a guy trying to complete the career Grand Slam? Is there another four-time major champ who gets talked about less than Brooks? And is there anyone who has quietly improved his game more than Fitzpatrick (No. 5 in strokes gained/tee-to-green)? Those are rhetorical questions. Obviously.

This afternoon wave is pretty stacked, huh? Another rhetorical question. We keep the late star-packed Thursday pairings with two two-time major champs and … Billy Horschel. Kidding, Billy. But seriously, you’ve got the 2020 (November) Masters champ playing alongside arguably the best iron player since Tiger Woods, as well as the entertaining Horschel, a past FedEx Cup champ who is playing well and closing in on the world top 10 for the first time. He’s also fun to watch even when he’s not playing well as we saw with his Sunday temper tantrum last year. Actually, he’s a bit lucky he didn’t get put in the penalty box for that — like these people.

We’ve got the Mad Scientist, Mullett Man, and Smilin’ Man going off in the group before Tiger on Thursday. DeChambeau has had an injury-riddled season and a relatively poor track record at Augusta National, but he’s always good theatre. Meanwhile, Smith is coming off the biggest win of his career (so far) at the Players, where Casey was contending for the biggest win of his much longer career. The theory that Paul Casey is ‘always smilin’!’ will be tested, though, depending on how much time the group has to spend looking for Bryson’s golf ball.

This was a tough call over the Hideki Matsuyama/Justin Thomas/James Piot pairing, but we couldn’t leave out the world No. 1, Scheffler, who also happens to be the hottest player on the planet. Also, Tony Finau is a big dude. A big dude who has been struggling this year, but also one who finished T-5 here in 2019. Oh, and then there’s the sweet-swinging 2013 Masters champ in Scott. But back to Scheffler, who is looking for a fourth win in six starts. Man, that’s, well, Tiger Woods-like. Wait, did we mention Tiger has a 10:34am Thursday tee time?