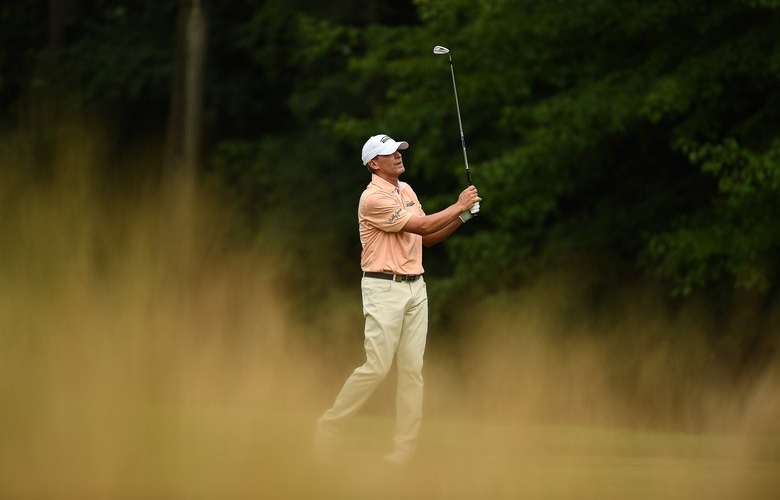 Stricker hits his approach shot on the 11th hole during the final round of the U.S. Senior Open Championship at the Warren Golf Course on June 30, 2019 in South Bend, Indiana. (Photo by Stacy Revere/Getty Images)

“I told him we would have had a heck of a tournament if he weren’t here,” Toms revealed. “There really was no stopping him this week. He was a man on a mission.”

Arguably one of the most likeable men in golf, the amiable Stricker was an admittedly ornery cuss and took on an air of defiance that might be considered a sort of appropriation of a portion of the home team’s nickname in this famous college town. He isn’t Irish. But he was fighting.

The result was a resounding and record-breaking performance in capturing his first USGA championship and second major of the year on the PGA Tour Champions.

With a cautious one-under-par 69, Stricker artfully protected the six-shot lead with which he began the day and won by that margin over Toms, the defending champion, and good friend Jerry Kelly. Like Stricker, Kelly is a native and resident of Madison, Wis., and he is the man responsible for stirring up a hornet’s nest by edging Stricker in a playoff one week earlier. The event was the American Family Insurance Championship … held in Madison … and hosted by Stricker.

“That really stung him,” said Stricker’s wife and caddie, Nicki.

Stricker sought redemption for himself – and for his wife, whom he said took the loss even harder. And he got it to the tune of a 19-under 261 total, which broke the championship record for lowest aggregate total. He was one shy of Fred Funk’s 20-under record in relation to par as the Warren Course got testy on a steamy summer afternoon thanks to greens that finally firmed up and a North wind the competitors hadn’t felt all week.

“Yeah, I came in here with a chip on my shoulder,” Stricker, 52, said after submitting one of his finest performances in a career that includes 12 PGA Tour titles. “I talked about being ornery and maybe I need more of that. I was just determined to make up for not finishing it off the week before. This means a lot. It was a dream week.”

It was a nightmare for the field as Stricker, after an opening 62 that tied the championship record, zoomed off with only the fourth wire-to-wire triumph in the U.S. Senior Open. He set the 36- and 54-hole scoring records along the way, and it was after he fired a second-round 64 to post 14 under that Billy Andrade, tongue firmly in cheek, remarked, “Let’s get this on the table right now. Steve Stricker is kind of becoming a jerk.”

And he kept it up. His six-shot margin of victory tied the championship record held by Gary Player and Fred Funk – the latter also coming in Indiana at Crooked Stick in 2009 – and it equalled his winning margin two months before in the Regions Tradition, his first major triumph on any tour in his career. No player in the history of the PGA Tour Champions ever before had won two majors in the same year by six or more strokes. Stricker is the 15th man in senior golf to have a season with multiple majors.

Only two men, Bernhard Langer and Jack Nicklaus, have won three in one year. Stricker now is torn between playing in the Senior Players Championship at its new home at Firestone Country Club in Akron, Ohio, or going to the John Deere Classic, site of three of his regular tour victories.

Fortunately, with the Warren Course also getting ornery, Stricker’s conservative approach never put him on the hot seat.

The only suspense of the afternoon – well, it wasn’t more than a smidge, actually – came when Stricker made his first bogey in 57 holes at the par-4 10th while Kelly birdied from five feet. The two-shot swing cut the margin to five strokes. But Stricker soon restored it to six in, well, ornery fashion, by chipping in from 46 feet for birdie at the par-3 12th.

He even called the shot, sort of. “Nicki and I had been talking that we’ve been looking for a chip-in,” Steve said, “and I said right before I chipped it, ‘I’m still looking for that chip-in,’ and she’s like, ‘I am, too.’ So maybe the power of us both thinking about it, it came true.

“It was a pivotal moment because even though the lead was still five shots, anytime you lose some of a lead, it gets your attention. So that was huge.”

Stricker might have struggled a bit on Sunday, but he still broke par, the only player to do that each day. Meanwhile, none of his nearest pursuers made a move. Toms, who had the best finish by a defending champion since Colin Montgomerie finished second in 2015, shot 68, while Kelly posted 69 in registering his second straight runner-up finish in the championship.

Playing with new purpose and an old set of irons he broke out of mothballs just this week, Stricker suffered just two bogeys in 72 holes, tying Craig Stadler’s record. This after making just one bogey at the Tradition. His 57 straight holes on the Warren Course without a bogey was 14 holes better than the previous championship mark.

This from a guy who went through two pronounced slumps in his career. After witnessing his dismantling of the first college course to host the U.S. Senior Open, you scratch your head, throw up your hands and say, “how did he ever hit such lows?”

“I’ve never really seen him play better. He had his sights set on this after losing … and so did I,” said Nicki, who like her husband felt a combination of elation and relief after making up for the playoff loss in their hometown.

More than once, Steve admitted that the loss was “eating at me.” He didn’t sleep for two nights. Then he got woke. Then he got even.

Stricker became the ninth man to win the U.S. Senior Open in his first try. Call it long-overdue compensation for a lifetime of USGA frustration, including 20 U.S. Open starts where he came up short. A national championship, even for the 50-and-over, set, is a big deal.

“There’s been a lot of years trying to get one of these [USGA trophies],” he said, holding back tears, a Stricker tradition after each of his victories. “Yeah, I won some nice events on the tour, but being a major out here, being a USGA event, a national championship, even though it’s on the senior level, it’s still very special. You know, like I said, I always held these USGA events to a higher standard. You wanted to play well at them. So this one here is probably the top.”