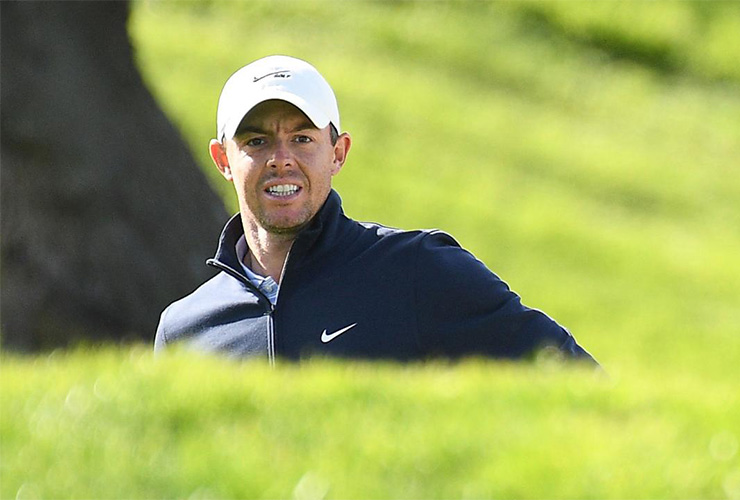 By Brian Wacker
On Sunday, the PGA Tour released a statement saying that the embedded balls of Patrick Reed and Rory McIlroy during the third round of last week’s Farmers Insurance Open were “virtually the same situation.” And, at that moment, that appeared to be the case. But two days later, the tour contacted McIlroy to tell him that more information had come to light. As it turned out a volunteer had actually stepped on his ball.

McIlroy revealed the news during his pre-tournament press conference on Wednesday at the Waste Management Phoenix Open.

“It’s so weird, the tour got an email on Monday from a volunteer saying that he didn’t tell me at the time and he should have, but he stepped on the ball to find it,” McIlroy said. “I guess at the end of the day I almost took the wrong relief because I should have taken relief for a stepped-on ball, which means you can place it instead of drop it. At the time I didn’t have that information.”

The PGA Tour later confirmed what McIlroy revealed with a statement of its own:

“On Monday evening, the PGA Tour received an email from a tournament volunteer which stated that during the third round of the Farmers Insurance Open, he observed Rory McIlroy’s ball—following his second shot on the 18th hole—having accidently been stepped on in the rough by another volunteer during the search for McIlroy’s ball. With this information unknown at the time to McIlroy and the tour, it was reasonable for him to proceed as he did. Having concluded his second shot had been embedded in its own pitch mark, he played his next stroke after correctly taking relief under Rule 16.3. Although the volunteer information was received well after the closing of the competition and did not in any way affect the outcome, the tour nonetheless notified McIlroy on Tuesday afternoon to make him aware.”

MORE: Rory McIlroy sounds off on the USGA/R&A distance statement

The revelation sheds new light on the furor that erupted in the wake of the Reed controversy.

On Saturday, after Reed had pulled his approach into the rough on the par-4 10th at Torrey Pines, he determined the ball had become embedded after being told by a volunteer that she had not seen it bounce when it landed. Video replay showed it had, however, raising questions as to how a ball that bounced forward in the rough could become embedded. Reed himself not that such an act was almost impossible in his post-round comments, but he maintained that his ball was embedded. PGA Tour rules officials said that Reed had followed the Rules of Golf properly, working off the information he had at the time, and was comfortable with how Reed had handled the drop.

Later that day, McIlroy’s third shot on the par-5 18th also settled into the rough. He struggled to find the ball, and when he did, he determined that it was embedded using Rule 16.4. Like Reed had earlier, McIlroy then took relief under Rule 16.3. Officials likewise said that McIlroy acted correctly even when video of the shot emerged showing it also bounced, noting that the two situations were similar and that both players following proper protocols using the information they had at the time.

The connection between the two incidents became a storyline through the remainder of the tournament. McIlroy said that he had a difficult time on Sunday night and began questioning himself on whether he had acted properly in handling his own drop. The news that his ball had been stepped on came as a relief.

“I at least felt better about my actions knowing I did the right thing, that I did take relief for a ball that was embedded or stepped on,” he said. “So it sort was nice that that came to light, because I was questioning myself on Sunday a little bit.

“Did I play by the rules? Did I see something that wasn’t there? It was a bit of a rough Sunday night. I just started to doubt myself a little bit, which is not like me. But I was convinced that it was an embedded ball. Then it’s funny, the tour got an email on Monday that it had been stepped on and the volunteer said something like, I’m so sorry that Rory is being dragged into this scenario, but I didn’t tell him that I actually stood on his ball to find it.”