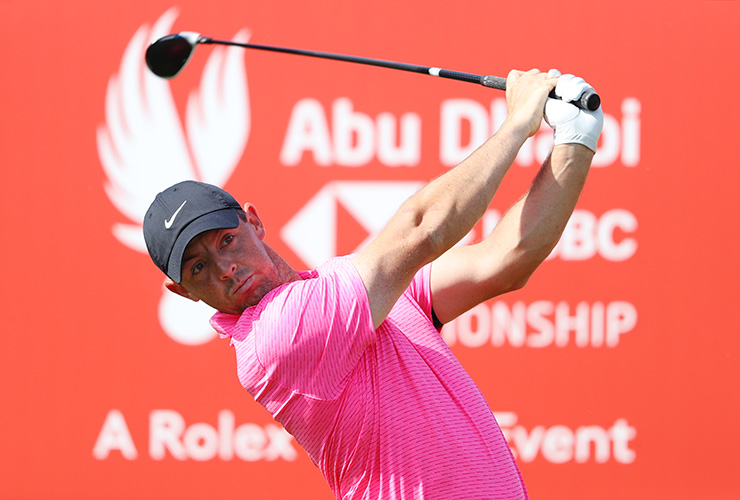 Warren Little/Getty Images
McIlroy tees off on the 6th hole during the opening round of the 16th Abu Dhabi HSBC Championship on Thursday.

We all know better, of course, just as McIlroy understands converting his stress and bogey-free opening to the 16th Abu Dhabi HSBC Championship into victory come Sunday won’t be as simple as his breezy 64 appeared. For evidence, kindly revert to his remarkably consistent record in the UAE capital which, in 10 previous starts, includes four bridesmaid finishes, three thirds, a fifth, and aside from an inexplicable missed cut in 2013, a worst finish of T-11 in his debut in 2008.

Maybe 2021 will be the year McIlroy gets his hands on the Falcon trophy? For the first time in his professional career, the 31-year-old Northern Irishman failed to win or finish runner-up in any event last season but warned everyone on the eve of this week’s European Tour season-opener that he was primed and ready to start the New Year running. As far as walking the talk, his eight-birdie circumnavigation of Abu Dhabi Golf Club’s National layout was some statement.

RELATED: After Snaring Two Early Eagles, Tyrrell Hatton Is Right In The Hunt For The Falcon Trophy

The 64, where he birdied all four par 5 and holed a bunch of lengthy putts on greens that mystified playing partner Justin Thomas (one over 73), earned McIlroy the early clubhouse lead by a stroke over the increasingly impressive Tyrrell Hatton. The Englishman dazzled out of the gate, eagling his opening  hole of the new season (the 10th) before rolling in an ever shorter putt to bookend an outward nine played in 32 strokes with another eagle on the 18th.

Hatton sprinkled in three back-nine birdies, including a lovely gain on the last (the 9th) but even those fireworks had to give way to McIlroy’s easy waltz. It was McIlroy’s low round at Abu Dhabi after three previous 65s, his equal best score in a Rolex Series event. Sure, he’s 0-13 since 2008 when it comes to winning his first event of the season but consider that McIlroy has also converted 29 previous opening 65s or better into five wins and 11 other top 5s. Maybe this is his year?

“Yeah, it was obviously a lovely way to start the year,” said McIlroy in what was his first competitive round since November’s Masters at Augusta National.

What pleased you most about today?

“A lot of it was very good. I felt like I drove the ball well for the most part, a couple of swirly ones in the middle of the round. Distance control was really good. I think I started off really well. Hit a lot of nice iron shots. But honestly it was probably the best I’ve putted these greens in Abu Dhabi probably in my whole career.

It took McIlroy nine starts after the COVID shutdown last year to record a top-10 but he arrived in Abu Dhabi with that trademark swagger seemingly back.

“It started at the end of the summer. One of the first breakthroughs I made was the second Playoff event, the BMW Championship at Olympia Fields. I played well there and felt like I sort of found something. Next week, our daughter was born and I went to THE TOUR Championship and ended up playing pretty well. Played pretty well at the U.S. Open with a couple of not-so-great rounds, and then played okay at the Masters, just apart from a bad nine holes.

“So it was getting better as the year went on, and honestly it was sort of disappointing that it finished when it did because I felt like I was getting right back into it. I didn’t really take much time off after Augusta. I sat at home for maybe three or four days and was like I just need to get out there and sort of keep this going.

“Played quite a bit over the Christmas break and practiced quite a bit. Felt maybe as sharp as I’ve ever done coming into the start of the season. It’s paid off early.”

So too has some time with Butch Harmon, sometimes via a video exchange and at least once in person. McIlroy’s long-time coach Michael Bannon is in Abu Dhabi this week but McIlroy concedes a fresh pair of eyes has helped.

“The one thing I love about Butch is he’s worked with so many players. So if you’re trying to explain to him, look, I’m trying to do this or I’m trying to create that feeling, the database of players that he’s worked with over the years, he could say, well, Freddie Couples felt this or Tiger did this or DJ felt that. It’s always nice to have that reference.

“I haven’t been able to see Michael that much over the last few months because of COVID and I thought I would take advantage of being in Vegas and seeing Butch. But Michael is here this week and he worked with me the week before Christmas, so we started to see a lot more of each other and that’s been great, as well. Michael knows my swing better than anyone knows it, inside out.

“It’s great to have him here and it’s great that things are sort of slowly getting back to normal where I’ll be able to see him more regularly this year, and I think that will really help.”