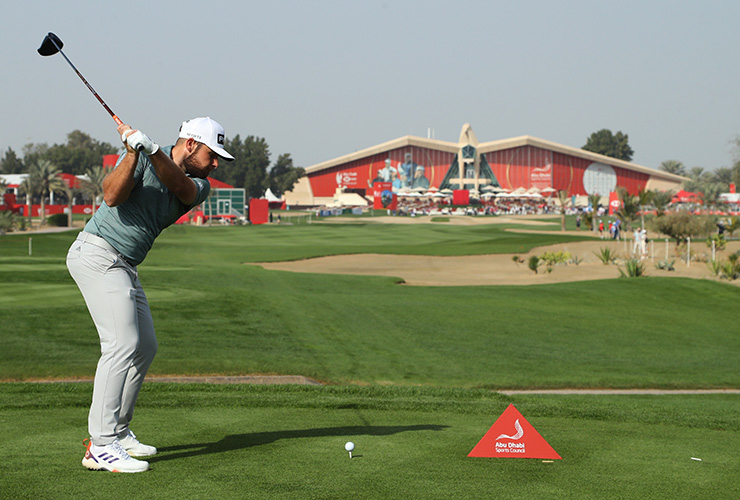 Warren Little/Getty Images
Hatton tees off on the 9th hole during the opening round of the 16th Abu Dhabi HSBC Championship on Thursday.

By Kent Gray
After a near three hour delay for fog, it didn’t take long for Tyrrell Hatton to get the new European Tour season off to a fast and spectacular start.

After piercing the fairway with his opening drive, the Englishman launched a three wood to within five feet of the pin on the par-5 10th on the National and duly rolled in the putt for a near-perfect eagle to ignite the Abu Dhabi HSBC Championship into life. Check it out:

It was going to be hard to top that kind of early ball striking but Hatton did just that, cashing-in on some deft wedge work to save par more than once on the next seven holes before hitting another 3-wood laser beam even closer on the 18th, his 9th, to bookend an outward nine played in 32 strokes with eagles.

As commentator Ken Brown said on the TV broadcast “they’re two of the best [shots] you’re likely to see all season”, and the season was barely two hours old.

The eagles weren’t the only highlights from the world No.10. A pushed drive on the 2nd produced a club drop and earned the wayward sphere a sarcastic double thumbs up from Hatton. It drew a rueful smile too, something the once fiery Hatton is learning to flash more often, as well as one of those three homeward nine birdies.

Cue Brown again: “He does smile, when he does smile it sort of brightens your heart [because] it doesn’t happen very often.”

Hatton was ultimately pleased with his day’s work, if not always his ball striking.

“Yeah, obviously two good shots. It’s not often you’re hitting 3-wood to five feet and a nice one to start the day,” he said of the opening eagle.

“I’m really happy with that. I think I got away with it, 10 holes, I hit one fairway, so that wasn’t ideal. The wind certainly picked up as the round went on, which I think the guys going out this afternoon, it’s going to be a lot tougher for them.

“Obviously I can only play with what’s in front of me and I’m happy with the job I managed to do on the end.”