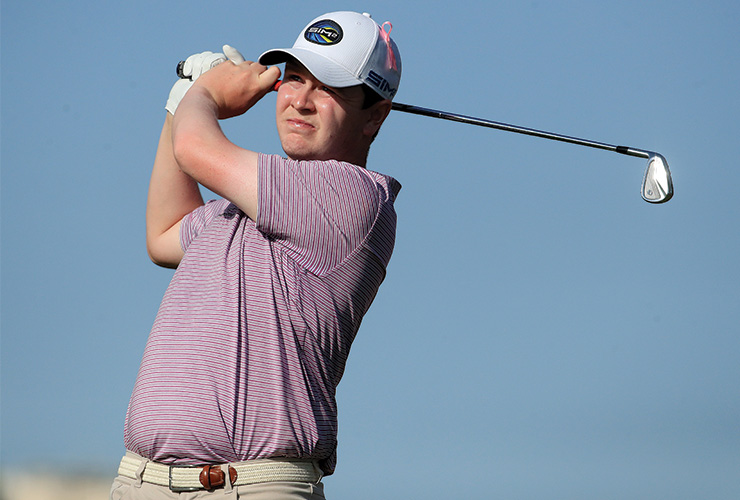 By Kent Gray
Robert MacIntyre may well have discovered the secret to golf.

The Scottish southpaw spilled the beans as he walked off the 10th tee at Emirates Golf Club on Saturday alongside on-course reporter Tim Barter, a man adept at drawing revealing sound bites from the European Tour’s best.

“It’s part of something I’m really working hard on, just acceptance,” the 24-year-old from Oban said.

“I’ve struggled over the years but it’s been drilled into me the last few weeks that it’s been a weakness and I feel like I’m starting to appreciate that there’s nothing I can do once that thing has left the club.”

By the 10th MacIntyre had dipped deep into his new-found reservoir of self-control and emerged out the other side, well on his way to securing a start in Sunday’s final two-ball alongside Paul Casey who leads by one at 15-under.

A par, birdie, chip-in eagle start saw MacIntyre alone atop the leaderboard after the 3rd hole but the likeable lefty looked to have wasted the blistering start when he bogeyed the 4th and doubled the 5th.

But MacIntyre, looking to join 1997 champion Richard Green (Australia) as just the second left-hander to hoist the Dallah and sneak inside the world’s top-50, handled the potentially title ending adversity like a seasoned veteran. He bounced back immediately with a birdie and binned a long putt for another gain on the par-3 7th, Three further birdies followed on the homeward nine as he signed for a 67. He left a few shots out on the Majlis as well, many of them just a roll or two short, in the jaws of the cup on 15 and an even longer effort that slide by on 16.

MacIntyre will need his normally reliable mallet to continue co-operating Sunday as well as a driver sporting a clubface with a very well-worn centre, as he eluded to in the brief chat with Barter.

“If you miss a fairway you are in trouble but if I keep driving it the way I’m driving it, I mean I’m hitting the middle of the clubface, you can control the ball.”

Control of the clubface and control of his emotions. It’s a combo Casey will have to fight hard to overcome in Sunday’s final round.