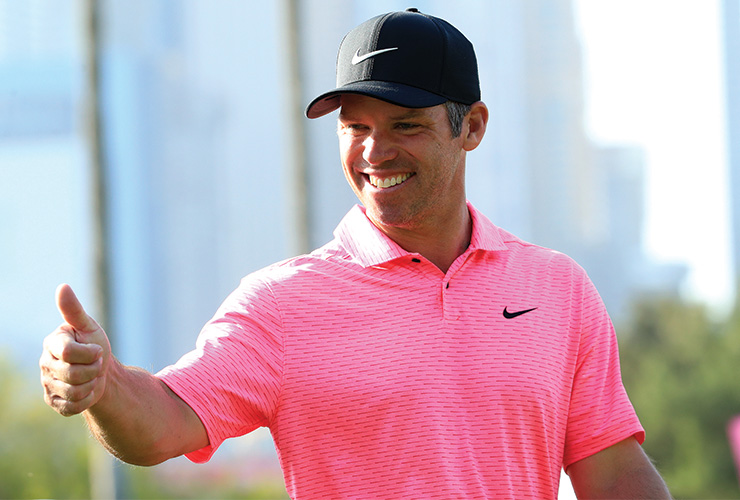 By Kent Gray
An Englishman with proven desert pedigree, effortless power and a game as sharp as it’s ever been so early in the season. A Scot high on confidence, striking it as sweetly as ever and learning to accept when he occasionally doesn’t.

There are no guarantees either Paul Casey or Robert MacIntyre will win the 32nd OMEGA Dubai Desert Classic but the way the duo stole the narrative on moving day at Emirates Golf Club, it will be a surprise if one of them doesn’t hoist the fabled Dallah.

Casey leads the way, a sensational birdie-eagle finish capping an equal best of the week 64 that he was reluctant to call flawless but kind of did anyway. Few would dare argue as the 14-time European Tour winner eased to 15-under, a shot clear of MacIntyre who snared an eagle of his own early on Saturday before recovering from a potential title-ending blip to sign for a 67. The Scottish lefty described his third round as “eventful”, others tenacious and ultimately terrific.

At 13-under, South African Brandon Stone shapes as the most likely plot spoiler on Sunday although 2017 champion Sergio Garcia and Englishman Laurie Canter won’t have given up yet at five adrift.

But as statements of intent go, Casey’s bogey-free romp and MacIntyre’s gritty third round fightback are hard to ignore.

“Same as always: Go for it. I’m not going to hang about,” MacIntyre said of his final round game-plan. “I’m going to put it all on the line whether it’s good or bad. Hopefully it’s going to be good and I’ve just got to enjoy it again. It’s another experience that I want to get, you know what I mean. It’s something that not many people get the chance at my age to do, and it’s just…I’ll give it everything I’ve got.”

A second European Tour title to go with his Cyprus Showdown breakthrough 10 weeks ago will take all of MacIntyre’s aggression and newfound acceptance of inevitable mis-hits.

“Yeah, I feel like I’m starting to appreciate that there’s nothing I can do once [the ball] has left the club,” he said “That’s something I struggled with last year. But this year, it’s been drilled into me by many people: Accept what comes. Just control what you can control. And it’s working well.”

Equally, a 15th European Tour title sure sounds sweet to Casey, twice a winner in Abu Dhabi and the champion of the Volvo Golf Championship when it was held in Bahrain in 2011.

“Behind you, I can see the very impressive list of winners, those photos of them behind the 18th green. It’s cool. Iconic trophy. Iconic event. Dubai has given so much to golf, especially European Tour, so yeah, that would be very, very cool,” Casey said.

Like MacIntyre, Casey has new clubs in his bag, a driver and 3-wood. His game feels sharper than normal to the courtesy of less range time and more off-season money games with the likes of Jon Rahm and Chez Reavie back home in Arizona.

RELATED: Caddie Confidential: Helen Storey takes us inside the ropes with Lee Westwood

“Like I’ve said many times it seems so far this week, I’m enjoying my golf, and that was an example of it today,” Casey continued.

“Today, I mean, really good. You can never say flawless, can you, because there’s always errors but it was very controlled. Really enjoyable round of golf; challenging yet at the same time with a little bit of wind here and there, I mean, it’s good stuff. “

It got better as it went on as well. After committing the cardinal sin of missing the fairway after taking an iron off the 17th tee, and then leaving his wedged approach short, Casey promptly chipped in for an unlikely birdie. A 296-yard drive and 3-iron flushed from 238-yards to 10 feet then set up the closing eagle, Saturday’s pivotal play.

“Yeah, it was the perfect club. It’s a glorious finish. I said to Johnny [caddie John McLaren] on the fairway there, that was a cool-looking shot when Monty hit a driver off the deck without the skyline you get now, and it might be cooler now with the skyline. It’s one of the iconic shots in golf, isn’t it? To have a perfect 3-iron in there and finish off with an eagle is pretty cool.”

After his opening 67 Thursday, Casey seem bemused to learn that his T-8 start to the year at the American Express didn’t warrant any Ryder Cup points as the PGA Tour event was played opposite Abu Dhabi, one of the European Tour’s gold-star events. Winning the ‘Major of the Middle East’ would be swift retort, just as a victory for MacIntyre would advance the former MENA Tour winner into the world’s top 50 with all those major championship sand WGC privileges. Whatever transpires, both men have become much larger targets on Padraig Harrington’s radar for the 43rd Ryder Cup matches at Whistling Straits. But that is for September. For now, enjoy the final round of January. It shapes as a doozy, perhaps even a Ryder Cup warm-up match of sorts. If the drama is anything like Saturday, the Desert Classic is poised to celebrate another very worthy British champion.