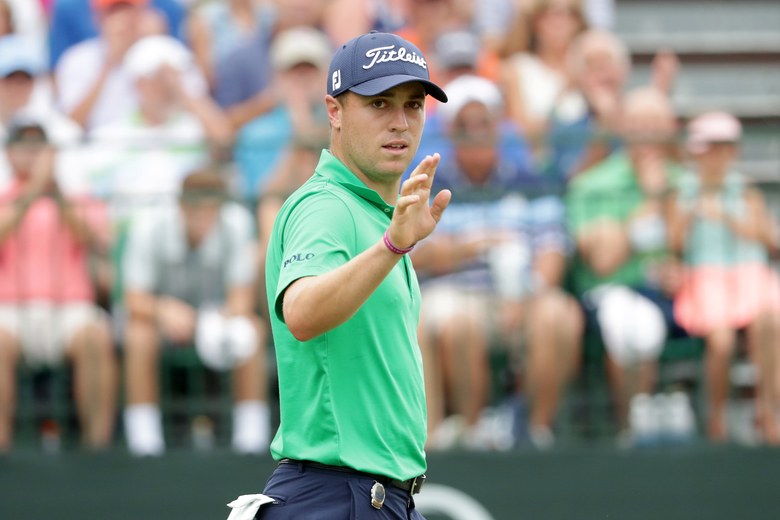 By Alex Myers
Long before a back-nine birdie binge, Justin Thomas’ Sunday charge at the 99th PGA Championship began with. . . a bogey. After missing the green with his approach shot on the first hole, Thomas bladed a bunker shot into another bunker, blasted out to about 14 feet, and drained the putt to avoid an opening disaster. The make was a sign of things to come — and a continuance of how Thomas has operated all season.

Of course, Thomas also made that hanging eight-footer on 10 and that chip-in on 13. Those helped, too, but it was his longer putting that carried him. The 24-year-old didn’t have one three-putt for the week at Quail Hollow, and he led the way in the putts-made-over-10-feet stat, converting on 12 of 40 he faced, or an even 30 percent. For comparison, the field averaged making only 13.63 percent of this length of putts.

RELATED: How Justin Thomas almost choked (it’s not what you think)

Of Thomas’ closest pursuers on the final leader board, Hideki Matsuyama was next-best in the category (fifth overall) at 24.32 percent, making nine of 37. And not surprisingly, Rory McIlroy finished dead last in the tournament on putts of more than 10 feet, converting just one of his 33 attempts for a scant 3.03 percent (He also ranks 173rd for the season).

What may come as a surprise, though, is how well Thomas has performed on putts of this length all season. Although his ball-striking, particularly his pound-for-pound power, garners most of the attention, Thomas, who is T-40th in strokes gained/putting, actually leads the PGA Tour in this stat for at 21.09 percent, just ahead of his pal Rickie Fowler at 20.72 percent. The tour average for the season is 15.37 percent, a number Thomas fell well below last year when he ranked 139th at 13.65 percent.

Thomas’ recipe for success during a breakout season that includes three victories in addition to a first major is similar to the one used by another buddy, Jordan Spieth, during his historic 2015 campaign. Spieth led the tour that year by making 20.73 percent of his putts of over 10 feet on his way to winning the Masters, the U.S. Open, and claiming the FedEx Cup and PGA Tour Player of the Year honors. If Thomas is to follow in his friend’s footsteps and claim that as well, it will have a lot to do with his increased accuracy from longer range.