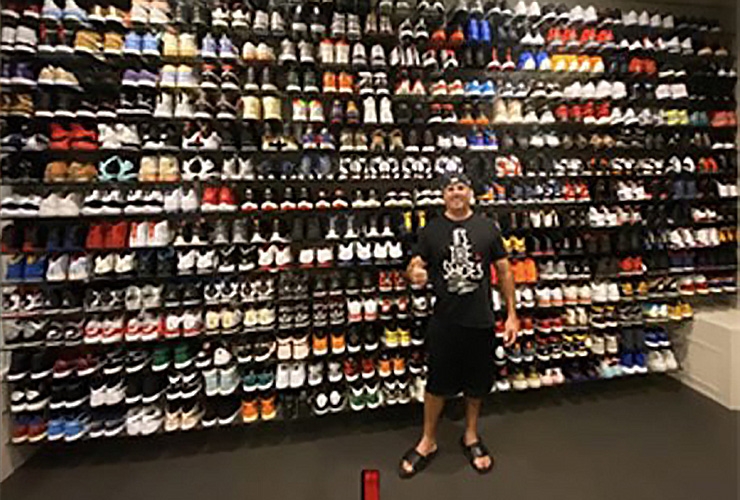 By Alex Myers
HELLO, FRIENDS, and welcome to another a special edition of The Grind where we can finally reveal the highlight of our golf career. No, it’s not a hole-in-one—but I did come close. Kind of. At Pebble Beach’s iconic seventh hole. Well, the replica of the famed par 3 that sits in Jim Nantz’s backyard. That’s right, I was invited to Jim Nantz’s house. And I even had the voice of American sports on the call as I hit shots while the Masters and CBS Golf theme song played. Check it out! I didn’t embarrass myself!

I was lucky enough to get a crack at Jim Nantz’s famed backyard golf hole—with the man himself doing play-by-play. #Blessed #ButNotQuiteBlessedToMakeAnAce pic.twitter.com/Dw8CYPEhSG

This bucket-list experience actually happened back in June during U.S. Open week, but the footage was under an unofficial embargo until the legendary broadcaster, who also happens to be a Golf Digest colleague, wrote about his personal golf oasis for the magazine. Sadly, I didn’t make it into Nantz’s column with the likes of Jack and Arnie. But thankfully, I have my own column, so you better believe I’m going to make sure as many people know about this as possible. OK, we should talk about other stuff now. I guess …

Webb Simpson: You know how Andrew Landry randomly won a few weeks back after missing five consecutive cuts? Well, this was the exact opposite of that situation. Simpson has been on an absolute heater since a T-5 at last year’s Masters, including four runner-ups, so a win was just a matter of time. The guy never has a bad week. Seriously, look it up: 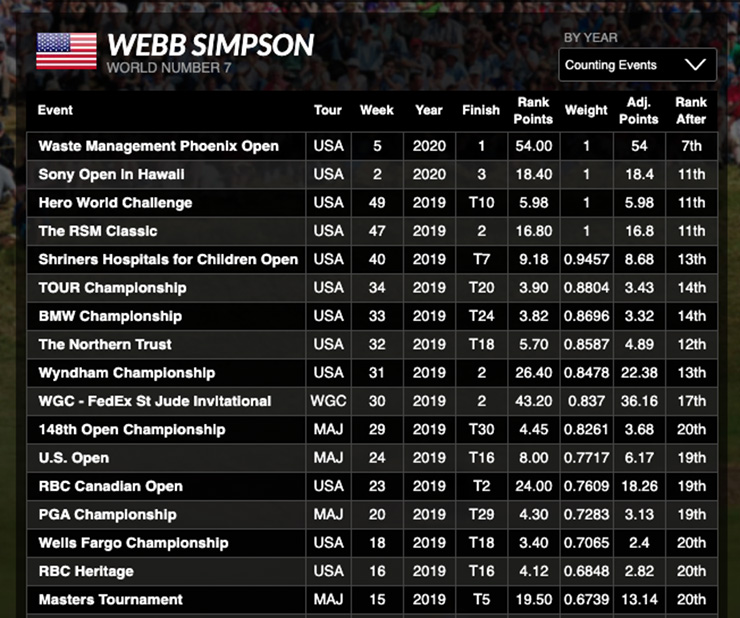 While superb iron play (second in strokes gained/approach) and some added pop off the tee have him back among the game’s elite players and up to No. 7 in the Official World Golf Ranking, the most amazing part of his career resurgence is the putting. Here’s a guy who actually snapped his trusty long putter over his knee in 2014 with the anchor ban approaching and who many wondered if he’d ever win again when he sunk near the bottom of the PGA Tour in strokes gained/putting for two seasons (174th and 177th). But he’s finished fifth and 11th the past two seasons and is currently seventh in the stat. Remarkable. 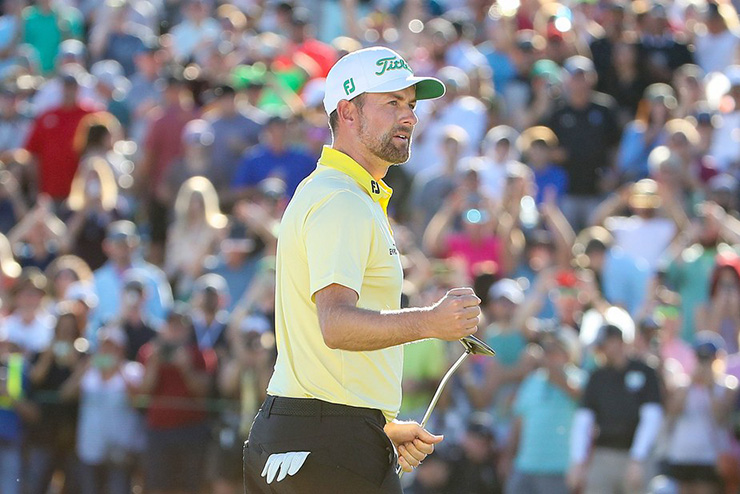 Patrick Mahomes’ golf swing: No, it shouldn’t surprise anyone that the Super Bowl MVP has other athletic talents, and yes, this is an old video, but it deserves another look following Mahomes leading Missouri’s NFL franchise to a title.

What a stud. And his golf game is only going to get better after having a green installed in his backyard in October. In fact, some people* (*me) are saying that was the turning point in the Chiefs’ season. Patrick, I’d love to come by and check out your backyard golf hole as well. Let me know.

Graeme McDowell: Padraig Harrington daggered McDowell over Thanksgiving when G-Mac asked about a spot on this year’s European Ryder Cup team. Well, it’s not a joke anymore after McDowell’s win at the Saudi International. Pair that with Lee Westwood’s recent win and the old “Ole Ole Ole Ole!” gang might be getting back together at Whistling Straits in September.

I might have to have a rethink on my potential vice captains @Graeme_McDowell @WestwoodLee https://t.co/IYV3txCFaj

Graeme McDowell’s warning: I’m all about the European Tour enforcing slow play under its new policy, but slapping G-Mac with a bad time after he gave an on-course interview to Sky Sports makes about as much sense as the Iowa Caucus. G-Mac is great with the media. Mid-round interviews are great for fans. But yeah, let’s do something that flies in the face of both. That rules official must be a real hoot at parties.

Brooks Koepka’s mid-interview thoughts: Speaking of mid-round interviews, Koepka probably speaks for most tour pros when he said this: “I won’t do it,” Koepka said. “I’m not interested in talking about what just happened or the difficulty of the holes ahead. I’m just focused on one shot at a time, where my ball’s at. I understand why it might be beneficial for the fans, but I don’t get it.” C’mon, Brooks, lighten up. Then again, the guy is World No. 1 (at least for a few more days) so he obviously knows what he’s doing.

Tony Finau’s final rounds: As our Joel Beall pointed out, it’s not so much that Finau chokes on Sunday (Sorry, Johnny), but he never quite seems to do enough to get the job done. This week was particularly heartbreaking with his four kids there to see it—had Webb’s five been there, we’d have quite the youth basketball game on our hands—and following days of Finau tributes to his sports idol, Kobe Bryant. But a final-round 70 wasn’t enough to close the door, leaving Top Ten Tony still open to criticism for being stuck on one career win. Close doesn’t count, sports are tough. Just ask Kyle Shanahan and Jimmy Garoppolo.

The PGA Tour heads to Pebble Beach for the AT&T Pro-Am, AKA that tournament where you will see more of Alfonso Ribeiro and Larry the Cable Guy the first three days than you will of the tour pro actually leading the tournament. On a personal note, I’m happy to see one of my all-time favourite athletes, the recently retired Eli Manning, teeing it up. Now there’s a QB who could get it done in a big spot.

Random tournament fact: Phil Mickelson is the defending champ. That seems like longer than a year ago, doesn’t it? Phil also happens to be the name I could have been listed below on Jim Nantz’s “Rock of Fame” had I made a hole-in-one. Of course, that didn’t happen. Good luck to those fortunate enough to get a crack at it this week.

—There will be another playoff between two guys with nine combined kids: 1-MILLION -to-1 odds

—Phil Mickelson will win this week: 25-to-1 odds (Actual odds)

—Phil Mickelson will tell other ageing athletes all about his diet this week: LOCK

Even by cheesy promotional tournament photos, this is something else: 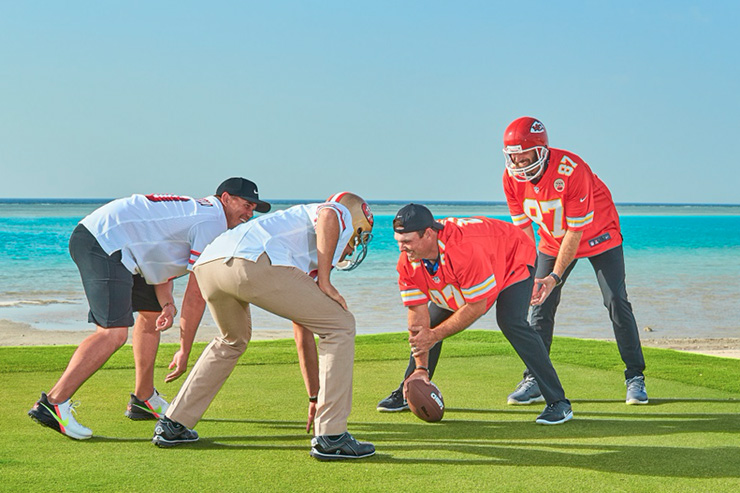 Congrats to DJ and Patrick Reed on their squad winning the Big Game!

When my man Greg Snedeker isn’t shooting The Grind videos with me, he’s working on much cooler stuff like this with my man Jim Nantz:

Cypress Point like you've never seen it. ? Watch our exclusive drone tour of all 18 holes narrated by Jim Nantz at the link in our bio. (?:@C_Amoedo for Golf Digest)

It’s just too bad Jim Nantz wasn’t narrating this too.

“I tell you what, for a guy that I never knew, I don’t think I’ve ever experienced sadness for the death of someone that I never knew like I did with Kobe. And my caddie and I were talking about it the other night and I asked him, why do you think, you know, this one feels different? I mean, many, many people have died in my lifetime that I knew of, but I think, just, it hit home to me. He’s seven years older, he’s 41, he has four kids, I have five; he has four daughters, I have four daughters; and he seemed like he was at a place in his life where he’s so excited about what’s going on around him, what he’s giving back to, what he’s involved in. So I think that made it hard, but I hope his wife Vanessa and his kids have felt what we have seen with what people are doing and how people are talking about how he impacted their life. So, yeah, I watched the Lakers game the other night and LeBron, the tribute, so I’ve been thinking about it all week. And I love what they did on 16 today, 24 on, 8 left. My caddie and I were actually trying to figure out that last night. We’re like, I’ve never seen that pin, what are they doing? And we didn’t really think about it until this morning. But, yeah, I mean, my heart’s still heavy, as I’m sure the world’s is, it’s going to be awhile.” —Webb Simpson on Kobe Bryant. Well said, Webb. Of course, I’d expect nothing less from a fellow Wake Forest man.

Pat Perez’s Air Jordans collection is a sight to behold: 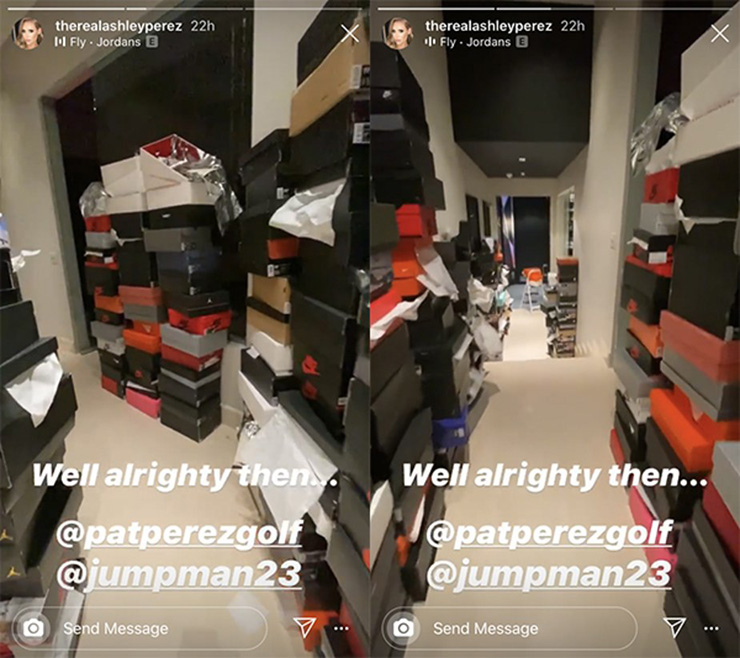 To the point that he had an entire room built in his new house just for them: 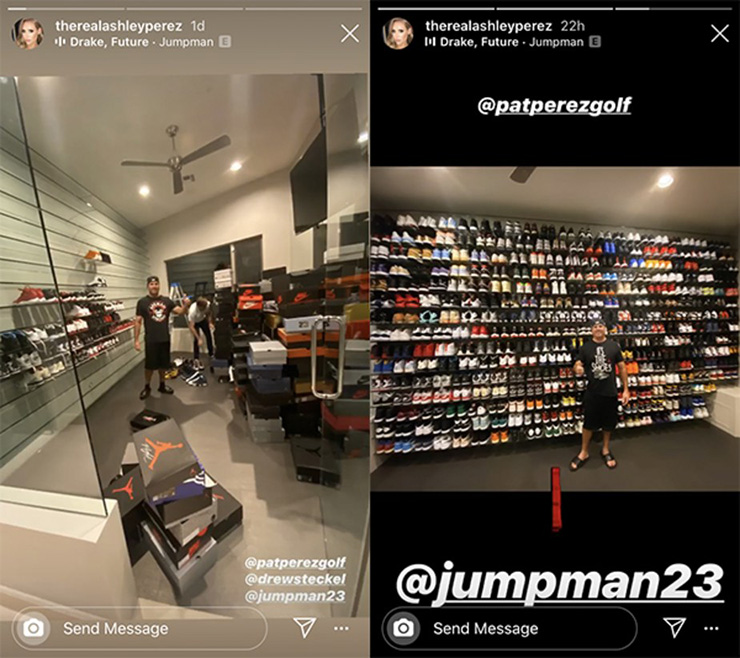 Well, for most of them, at least.

That’s pretty good. And so was Phil’s week as he finished T-3 in Saudi Arabia after back-to-back missed cuts on the PGA Tour to start 2020.

CBS Sports’ Dottie Pepper came on this week’s Golf Digest Podcast to talk about the eerie scene at Torrey Pines and the time she got sick celebrating her biggest win. Dottie Pepper is awesome.

Brooks Koepka will lose his World No. 1 ranking next week to Rory McIlroy. Just a guess, but Brooks isn’t too concerned. … Congratulations to former Golf Digest colleague Bill Fields for winning the PGA Lifetime Achievement Award in Journalism. They couldn’t find a nicer—and more deserving—golf writer to give this to. … And finally, a current Golf Digest colleague was honored in a much different way: 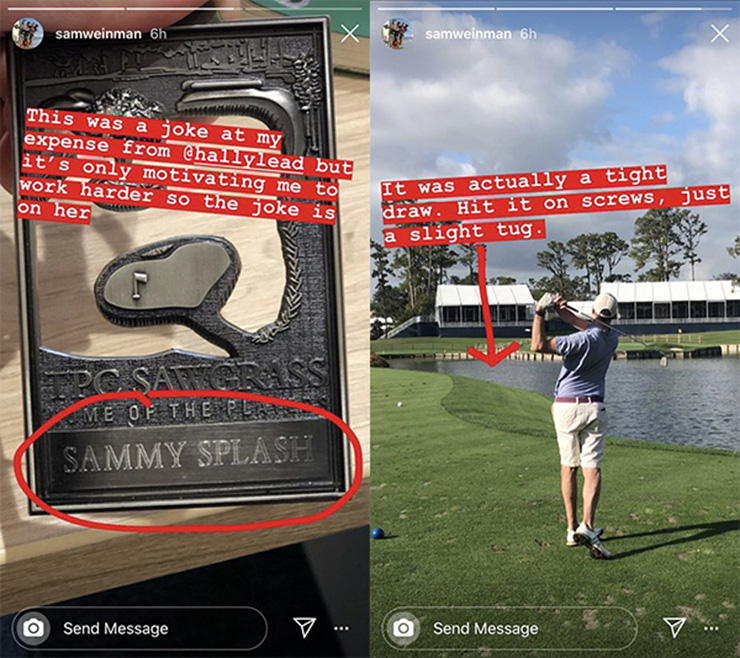 Would you take Brooks or DJ in a game of tackle?

How much is Pat Perez’s shoe collection worth?

Will I ever be invited back to Jim Nantz’s house?