Does Tony Finau choke on Sundays, or is he the victim of bad luck? An analysis 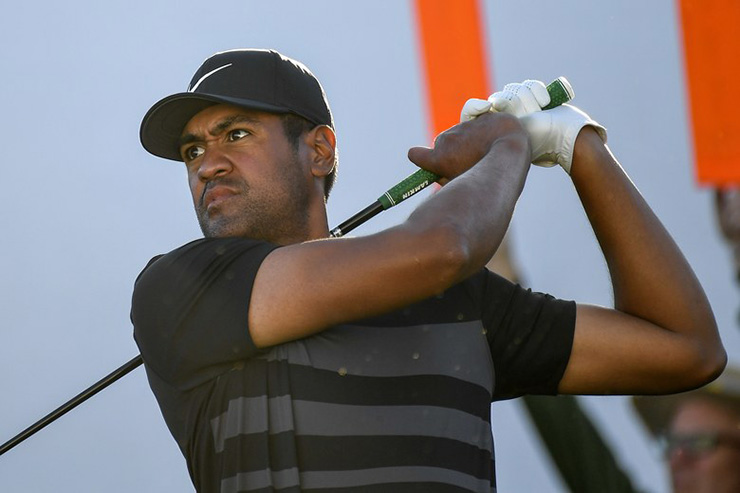 By Joel Beall
If coffee is for closers, Tony Finau must be an iced chai man. That is the perception, at least, amplified after Finau watched a two-stroke lead with two holes to play evaporate in Phoenix this weekend, his pocket picked by Webb Simpson, who proceeded to wave Finau’s wallet in jest by making birdie on the first hole of a sudden-death playoff to deny Finau, again, of his first full-field win on the PGA Tour.

“Hats off to Webb. A couple birdies coming home, and if you’re going to get beat that’s how it should happen,” Finau said in defeat. “I definitely didn’t give him the tournament. He took the lead from me early, and I got it late, but unfortunately, it’s how the cookie crumbles.”

Before we go further, Big Tone is right: the 2020 Waste Management Phoenix Open was won by Simpson, not lost by Finau. Three straight birdies, two on one of TPC Scottsdale’s hardest holes, is getting it done. Conversely, cookie seems to crumble often with Finau, a truth that continues to confound. How does a player with renowned length, talent and touch, with five top 10s in the last eight majors and who’s been in the world’s top 15 for the better part of two years, boast only a lone alternate-event title as he nears 31?

Yes, Finau overcame a hell of a lot just to make it on Tour; that we’re having this discussion is a golf miracle, and testament to his nerve and gall. It’s also impossibly hard to win on Tour, which makes the number of titles a player owns perhaps an unfair barometer.

“I understand people have to ask questions,” Max Homa said to us last year, on judging superstars when they don’t win. “But the What happened? What went wrong? … give me a break. What went wrong? He finished fifth and beat 150 of the best golfers in the world. I think that’s pretty good.”

That is pretty good … and yet wins are the barometer fans, media and players use to decipher the pretty good from great. And in that capacity, Finau has come up frustratingly lacking.

The question is, why? It is really a matter of failing in the clutch, or has Finau been the victim of bad luck?

A look at Finau’s stats might help answer the question. At a quick glance, something seems to be up on Sundays. In four of the past five seasons, Finau’s worst scoring has come in Round 4, and the disparity, and overall performance, in three of those seasons is illuminating (Note: the number in the parenthesis is his overall ranking on tour for that round):

Of course, these numbers are season totals. Theoretically, the Sunday figures could be submarined by a handful of meaningless rounds where Finau was never in the tournament mix. So let’s get more surgical.

Since the 2017-’18 season, Finau has 13 top-six finishes on Tour. Surprisingly, despite the stats above, there were zero instances of Finau free-falling while in contention. That said, the numbers aren’t particularly kind.

Granted, the lack of backdoor finishes has to break Matt Kuchar’s heart, but alluded above, the results are damning. Finau has been within three shots of the lead seven times heading into Sunday, three of which he held or shared the lead. Finau worsened his position from Saturday to Sunday, either in strokes or standing, in a whopping eight of the 13 events.

Worse, there’s a jarring absence of inspiring charges. The scoring average in those bids is 70 on the dot, which would have ranked outside the top 60 in final-round scoring last year. It’s also 1.7 strokes higher than the winners’ final-round score (68.30).

To be fair, there has not been a single no-show from Finau in this span; Finau’s 73 at the ‘18 Farmers came during the hardest fourth round on Tour that season, the field averaging 74.779 on the afternoon. It’s also a formidable list of opponents who went on to win the tournaments, with seven major winners and all but one (Brendan Steele) being either a current or former top 20 players in the World Rankings.

Nevertheless, the data is quite clear: Come Sunday, Finau is stuck in neutral. 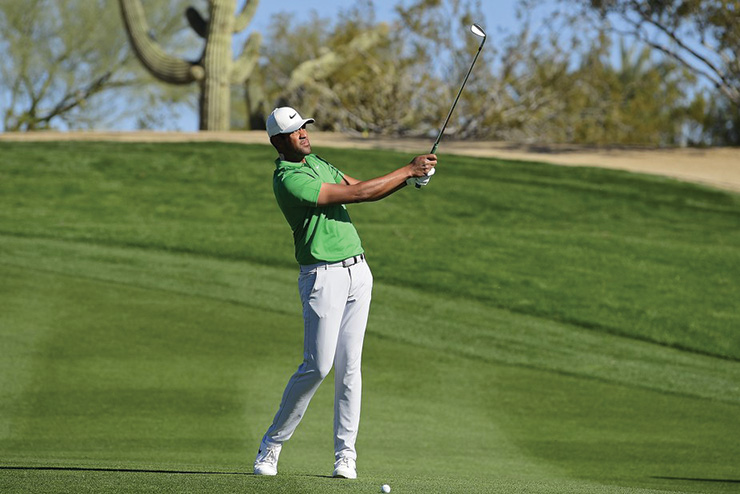 As to how it’s happening, the general consensus is that Finau’s putter goes cold, and there is some statistical evidence to support that. Last year he was 73rd in putts per round but 170th come Sunday, and 108th in fourth-round putts in 2018 against a 78th overall rank. But that’s more of an overall projection than a week-by-week dissection. For what it’s worth, Finau posted a 1.192 stroked gained/putting figure Sunday in Phoenix and finished fifth in the field in that category.

Likely, the reason is not so much statistical as it is abstract: Finau simply hasn’t figured out how to win yet. As we’ve seen in the recent transformation of Brooks Koepka, sometimes it takes years of getting close before cashing in. It’s a cliché, but that doesn’t make it any less true, and something Finau acknowledged after coming out on the business end to Simpson.

“It’s a bitter week as I look back on it. But man, lots of stuff to be learned,” Finau said. “I had a chance, a great chance to win this week. Unfortunately, it didn’t happen, but my game’s better than it’s ever been. I have more confidence now than I’ve ever had. And again, if you know anything about me, I’ll persevere through anything. If you want to say this is a stumbling block or whatever it is, to chase this next one, but I’ll knock it off soon and will be on my way.”

So yes, Finau’s coffee privileges are suspended for the moment. Doesn’t mean they won’t eventually come.