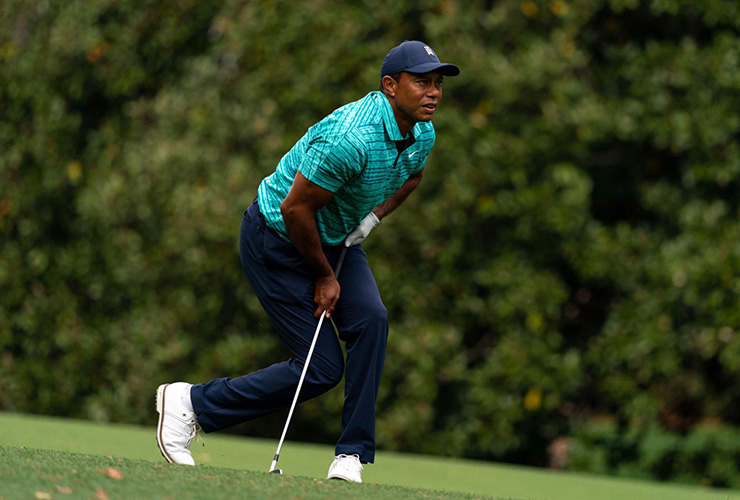 By Dan Rapaport
AUGUSTA, Ga. — Augusta National punched Tiger Woods in the face, which is pretty rude considering the state of his leg. Woods wobbled amid a three-club wind and got off to a putrid start during Friday’s second round: four bogeys in his first five holes, and the one par came on a par 5 he used to feast on.

“I could have easily kicked myself out of the tournament today,” Woods said. Who’d have blamed him? His back is fused, his right leg’s bionic and his left leg had been through five surgeries of its own. He hasn’t played a tournament in 17 months and walks with a visible limp. He’d already gifted the sporting world with a one-under 71 on Thursday that will grow more legendary as the years wear on. He could’ve packed it in, fired up the PJ and been back in Jupiter by 9:30.

Now’s time for the second part of the above quote: “But I kept myself in it.” 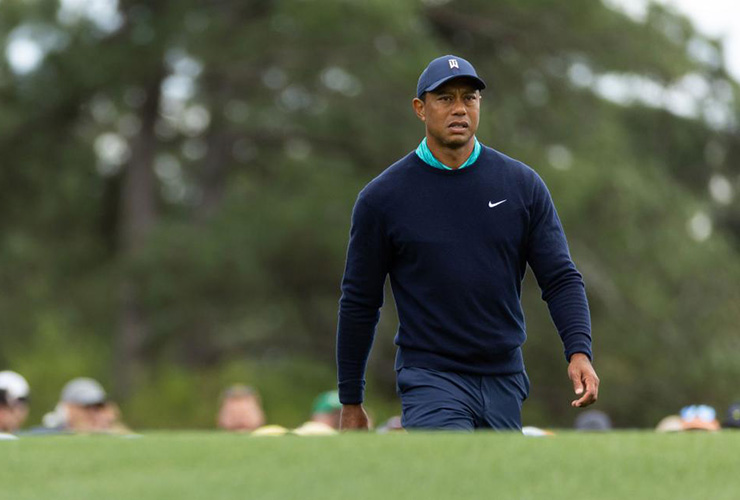 Woods has yet to miss the cut at the Masters in 22 professional starts. Adam Glanzman

Woods played his final 14 holes in two under to grind out a two-over 74, good enough to continue his perfect record of never missing the Masters cut as a professional. He’s made the weekend as a cocky youngster, a conquering hero and now a medical marvel. He is nine back of Scottie Scheffler’s lead but just four back of second through 36 holes. Four back of second! He’s ahead of Rory McIlroy and Jon Rahm, Tony Finau and Viktor Hovland. Jordan Spieth, Brooks Koepka, Bryson DeChambeau and Xander Schauffele missed the cut.

And there was 46-year-old Tiger, dead-pan, talking about the back nine on Sunday.

Woods’ triumphs have skewed our expectations. It’s not fair, really, how unsurprising this performance is. When he turned up to Augusta National on Sunday, all but assuring that he would play, his peers knew he wouldn’t embarrass himself.

“I’m not surprised at anything he does anymore,” is how Rory McIlroy put it. He’s learned by now.

Do not mistake unsurprising for unremarkable. If Thursday’s round proved that Woods could still play, Friday’s showed that Woods can still contend. Here, at least. You couldn’t draw up a better course fit for a man with his game and his body. Augusta National demands tunnel-vision focus. It yanks you out of your comfort zone and asks for shots you can play a full PGA Tour season without hitting. It smiles upon guile. It breathes life into the old guys. It’s why Woods refused to take even a single day off from rehabbing in the last 14 months, why he didn’t panic after that disastrous opening stretch. 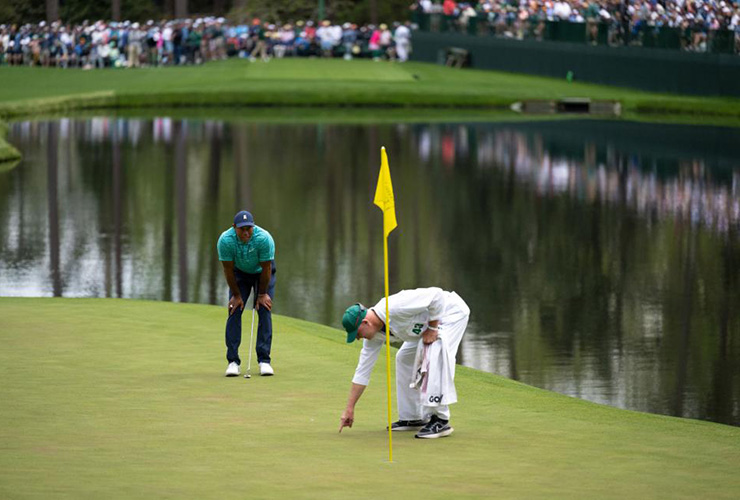 Woods and caddie Joe LaCava look over a birdie attempt on the 16th hole. JD Cuban

“I told Joey that, hey, we got a lot of holes to play. It’s going to be tough all day, so let’s get it back to even par for the day somehow. If I can just stay at even-par for the day, I thought that would have been a pretty good comeback. I didn’t quite get there.”

It wasn’t for lack of effort. It never is. He found his footing with a birdie at the par-5 eighth, pumped a drive at nine and struck a heavenly long iron from 208 yards to three feet.

“That 5-iron was kind of like the old days,” Joe LaCava said with a smile.

Bogeys at 11 and 12 were erased by birdies at 13 and 14, and he closed with four straight pars—two of which could’ve been birdies. A majestic 3-wood into the newly beefed-up par-5 15th preceded a clunky chip and a disappointing par, and he carved a perfect draw off his slope—seriously, if that ridge isn’t named Tiger’s Tilt, we’re going to have issues—to 10 feet on 16 but didn’t give the birdie putt enough gusto.

The craziest part? His movement grew crisper as the round wore on. He walked smoother and picked up his tees quicker. Woods drove the ball rather poorly on Thursday, alternating weak heel-spinners with snipe-hooks. On Friday, he grooved a power fade and blistered drives on 15, 17 and 18, getting his ball speed up to 173 mph—faster than any tee balls he hit on Thursday. He began to think less of his leg and more with his hands.

“I don’t have to think so much about what do I need to do? I can just get up there and feel it and play using my hands again instead of just kind of thinking, ‘OK, I need to do this, this, this to hit this shot, right?’

“Normally I just see it, feel it, go hit my number. I haven’t played a lot of tournaments of late, so it’s been a little bit rusty, but I’m starting to come around.” 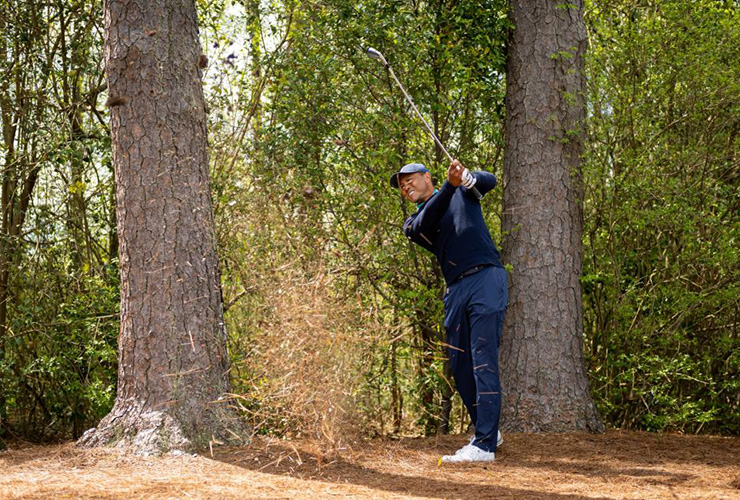 Woods plays his second shot from the pines on the fifth hole. JD Cuban

He’ll get two more rounds to push up the leader board. Which, of course, is patently ridiculous—that he made the cut and that he seems to be improving as his leg surely keeps swelling.

“I’m proud of the fact that my whole team got me into this position,” Woods said. “We worked hard to get me here to where I had an opportunity and then not to have any setbacks this week, and we haven’t. I kept progressing.”

It could all change in the 40-something degree weather forecasted for early Saturday; Tiger tees off at 1 p.m., playing with Kevin Kisner. Woods might wake up stiff as a telephone pole. He could tumble down the leader board. But he’s still on that leader board—the latest bullet point in an increasingly absurd resume.

“He made the cut on one leg,” LaCava said with a smile. “That’s pretty good.”

MORE MASTERS 2022 STORIES
Now comes the hard part for Tiger
Things you may have missed on Day 1 of the Masters
How will the amateurs get on at Augusta?
Our favourite groups to follow at the Masters
The entire field at Augusta, ranked