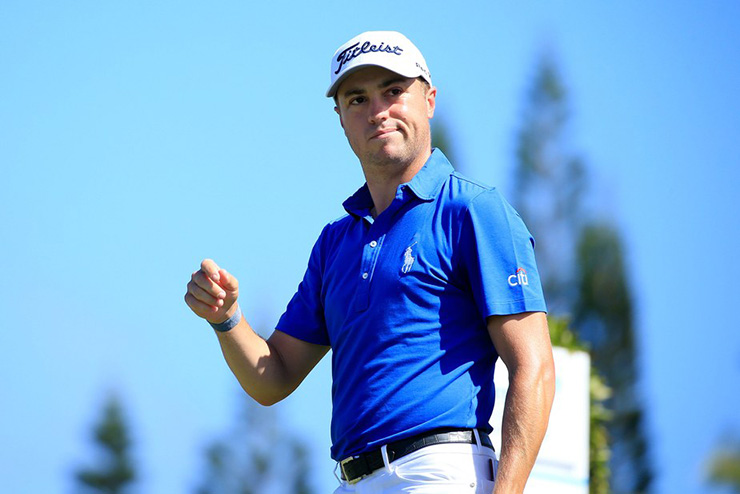 By Alex Myers
Welcome to another edition of The Grind where we started the new year not with a bang, but with a beep. In fact, a series of very annoying pre-dawn beeps thanks to the batteries dying in a carbon monoxide alarm. Fortunately, because I’m old and hadn’t even stayed up until midnight on New Year’s Eve, I didn’t lose too much sleep. In any event, the first PGA Tour event of the new decade delivered lots of drama and gave us plenty to talk about as we begin an eighth(!) year of The Grind. Wow, time flies when you’re having fun, and doing, well, whatever the heck it is I do in this space. Thanks as always for following along.

Justin Thomas: Is it too early to start putting together the next round of player-of-the-decade posts? Because this guy has a great chance to be at the top, and he’s already off to a fantastic start. Thomas won the Tournament of Champions for a second time in four years, outlasting Presidents Cup teammates Patrick Reed and Xander Schauffele in a playoff at Kapalua, and overcoming some bad swings and a crazy decision on the 72nd hole that almost made Josh Allen’s absurd attempted lateral look smart by comparison. In the end, though, JT won for a third time in seven starts. HOT.

In fact, his 12th career PGA Tour title made him the fourth player to reach that milestone before turning 27 (Tiger, Jack and Sneed are the other three. Decent). And, amazingly, the artist formerly known as Jordan Spieth’s little buddy has now passed his good friend in career wins after once trailing 8-1. I hope this doesn’t affect the dynamic of #SB2K20! 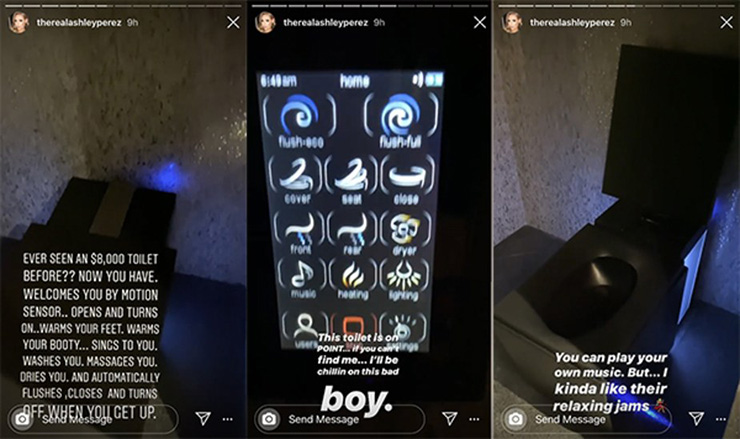 Does anyone need to be massaged or have their feet warmed while doing his/her business? Of course not. But it sure sounds luxurious. Considering Perezes’ recent $10K Vegas dinner bill, getting this magical toilet for less seems like a steal.

The World Handicap System: The new system that’s going into affect and will put most of the world on the same system makes a lot of sense. I applaud such changes as attempting to factor in conditions and updating daily so there isn’t as much luck as to when your handicap is calculated ahead of your big event. I also like the net double bogey max rule for everyone. It never made sense to me that different players could take different max scores. However. . .

The World Handicap System: There are still some problems, starting with the system counting even fewer rounds. I’m not a math major, but the fewer the rounds that count, the smaller the sampler size and the less accurate you get. I thought they’d go the other way with that. Also, as Dean Knuth points out, the new extra calculation to adjust course handicaps to par defies logic (since course rating already factors par into its equation) and makes this process even more confusing. In related news, I hate course handicaps because I always feel like I’m giving everyone on my golf trip too many strokes. I’m calling for a course handicap revolution! Get rid of them altogether!

Patrick Reed’s reception: It may be a new year, but people haven’t forgotten about Reed’s sand shenanigans in the Bahamas last month. One fan went as far to scream “CHEATER!” after Patrick Reed missed his birdie attempt on the third and final playoff hole. And one player—former U.S. Ryder and Presidents Cupper Chris DiMarco—went as far as calling Reed, well, see for yourself the tweet that has since been taken down: 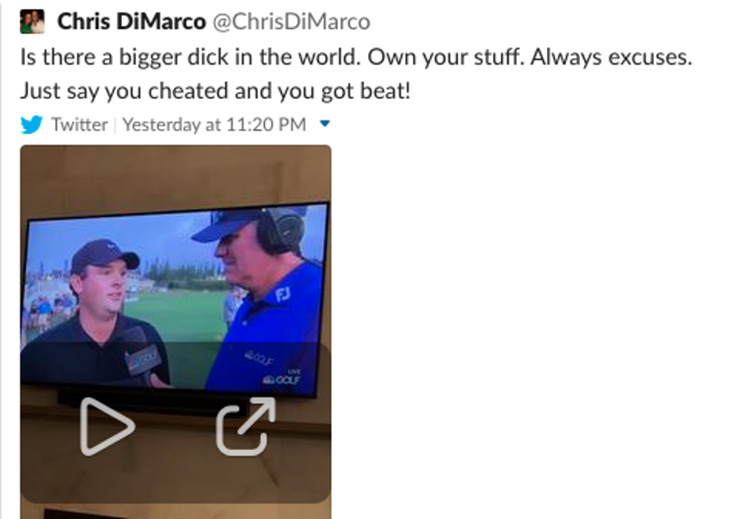 Wow. Reed is under such fire from all around that I’m surprised Ricky Gervais didn’t take a shot at him in his Gold Globes monologue/bloodbath.

The PGA Tour continues its Hawaiian Swing with the Sony Open, AKA that event where everyone thought a ballistic missile was on its way to wiping out the entire island. And yet Justin Thomas just kicked back on his hotel couch, opened up a sliding door and listened to music. No wonder he’s so cool under pressure. Well, other than that horrendous decision to hit 3-wood on 18 on Sunday.

Random tournament fact: Seven of the past eight winners of this tournament played at Kapalua the week before. So do with that what you will. For the record, I’ve got $10 on Brendon Todd at 50(!)-to-1 odds. Sure, he didn’t have a good week at the Sentry TOC, but he played, damn it.

—That’s the last time a fan will heckle Patrick Reed this year: 1-MILLION -to-1 odds

—Brooks Koepka will publicly criticize a golfer for slow play this year: 40-to-1 odds (Actual odds)

— Brooks Koepka will privately criticize a golfer for slow play this year: LOCK

Yes, this came out a few weeks back, but we were on break and didn’t get the chance to properly discuss. And because it’s one of the greatest golf photos of all time. 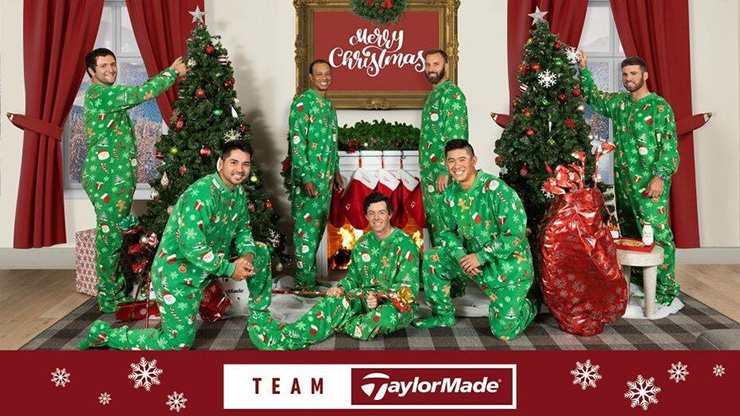 I don’t care that more that we have more than 99 per cent of the decade to go, there will not be a more unlikely putt holed in the next 10 years than this:

A Baylor fan sinks a putt on the court to win five thousand dollars. pic.twitter.com/LK4IaeGSnV

Good for that dude. Although he deserved the same paycheck JT got at Kapalua for that effort. And speaking of crazy “putts”:

VIRAL VIDEO OF THE WEEK INVOLVING AN OSCAR-NOMINATED ACTOR

People freaked out about the Masters promo that ran over Christmas, but this U.S. Open at Winged Foot ad involving Don Cheadle has me even more hyped!

Did you see it…Oh, you didn’t?

Around the #USOpen, we love football…but we’re not talking about football.

This is only the beginning! pic.twitter.com/LkuqXM2xi5

“I should have won the tournament. I know it. Everyone knows it.”. —Xander Schauffele. Substitute the word “game” for “tournament” and this statement could have also been uttered by anyone on the Buffalo Bills.

Members – Attached are my #notes from today’s meeting with architect Hank Jones on our upcoming back nine redesign. pic.twitter.com/xafP6231Bn

One of the highlights of my 2019 came when CPG followed me. A true genius.

How about Olympic gold medalist Aly Raisman showing off her swing?

Had no idea what I was doing… think I just got lucky ? https://t.co/tIfGq2HoUg pic.twitter.com/0Cpihr7hz8

Of course, you’d expect a gymnast to have good balance. Speaking of decent athletes. . .

And how about the New Year’s Eve message Brooks Koepka sent the rest of pro golf? While everyone else was out partying, the World No. 1 was in the gym:

It’s been a journey these past 3 months rehabbing my knee but it’s coming along & I’m ready to get back out there healthy for a strong 2020 ? pic.twitter.com/oIFunY7wO0

Meanwhile, my resolution is to read our post called “12 exercises every golfer should be doing now.” Not to actually attempt them, mind you, but to read about them. Hey, it’s a start.

THIS WEEK IN PGA TOUR PRO PUBLIC DISPLAYS OF AFFECTION 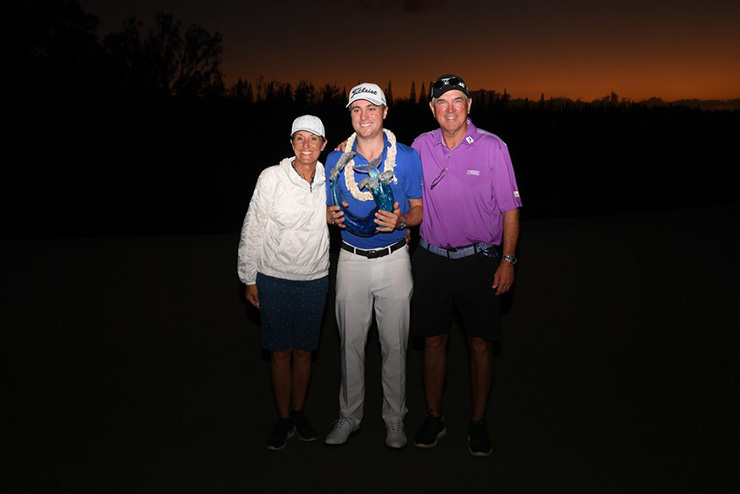 Brooks Koepka beat Rory McIlroy for the Golf Writers Association of America Player of the Year. I voted for Brooks and I’m glad to see golf writers put more value on major championships than tour pros. . . . Scott McCarron beat Steve Stricker in the GWAA’s vote for PGA Tour Champions Player of the Year. I voted for the Strick Show and for some reason, golf writers don’t put more value on majors when it comes to the senior circuit. . . . Dottie Pepper paid off the lunch debt for 50 students at her former elementary school in upstate New York. What a great gesture. . . . Lost in all the best-of-the-decade madness was an incredible Bernhard Langer stat. While Dustin Johnson and Inbee Park led the PGA Tour and LPGA Tour, respectively, with 18 wins, Langer led the seniors with 32! What a machine.