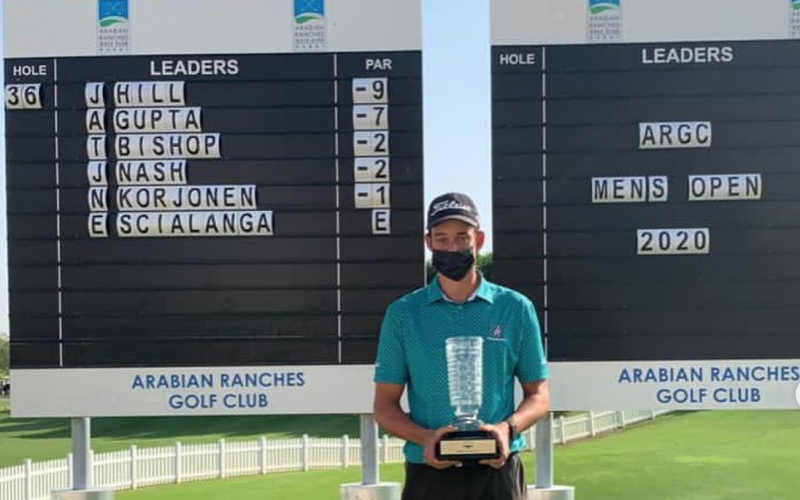 By Kent Gray
Josh Hill has been crushing it in the gym and flushing it on the range and the results on the golf course, notwithstanding a temporary and ultimately inconsequential blip, are as impressive as ever.

The 16-year-old Dubai-based England Boys’ international notched up another EGF title at the weekend, overcoming a “lacklustre” opening round 72 on Friday with a stunning nine-under 63 on Saturday to win the Arabian Ranches Men’s Open.

With lift, clean and place in operation, the 63 (which included a bogey on the par-3 7th!) doesn’t count as an official course record but it mattered little as Hill overturned a two-shot deficit to triumph with a -9 total, two strokes clear of pal Arjun Gupta. Toby Bishop made it a Trump International Golf Club, Dubai one-two-three after sharing third place with James Nash (Ormskirk G.C.) on -2.

The coronavirus pandemic has impacted elite amateur golf even more profoundly than the professional circuits which makes the EGF Order of Merit series a vital source of competition for the region’s top ams, especially with the planned resumption of the MENA Tour’s postponed season in Jordan apparently canned.

Hill’s father Russell underlined that in an Instagram post celebrating yet more silverware for his world-record-setting son in the third event of the 2020-21 EGF OOM Championship:

Russell Hill, an osteopath who recently went out on his own in a business actively looking to help golfers avoid common injuries and improve their own games, has been on hand to capture his son’s hard work in the gym recently.

“I tried to convince Josh (because it was weekend) that we should have a bit of a sleep in and start later (7am),” Russell Hill said in a recent social media post. “He totally refused and insisted we start at 5.30. I don’t have the inclination to put a dampener on desire, enthusiasm, momentum, dreams, dedication, drive, grind, progress etc, etc. I love supporting it and love being part of it.”

There has also clearly been some tidy work on the Trump Dubai range in conjunction with his England-based coach Rob Watts. Just check out that divot patten:

Hill’s latest victory comes after he captured the Trump Dubai club championship last month with a pair of course record-equalling rounds of 65 to comfortably edge Craig Vance by four strokes.

It will be interesting to see whether Hill has the opportunity to qualify for the Abu Dhabi and Dubai Desert Swing events early next year or will be handed invites. He became the youngest player to qualify for two European Tour starts earlier this year, the opportunity at the OMEGA Dubai Desert Classic courtesy of his victory in the MENA Tour’s 2019 amateur OOM race.

Hill entered the Guinness Book of World Records as the youngest winner, at 15 years, six months and 27 days, of an Official World Golf Ranking event at the MENA Tour’s Al Ain Open in October 2019.

The next EFG OOM event is the Sharjah Golf & Shooting Club Men’s Open on Dec 4-5. 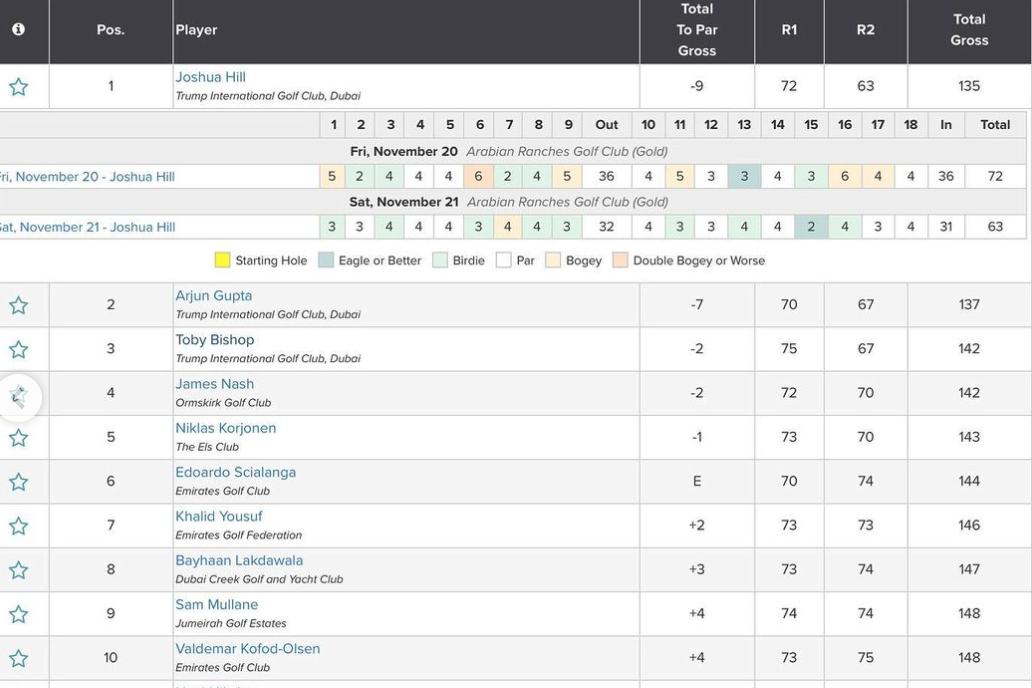