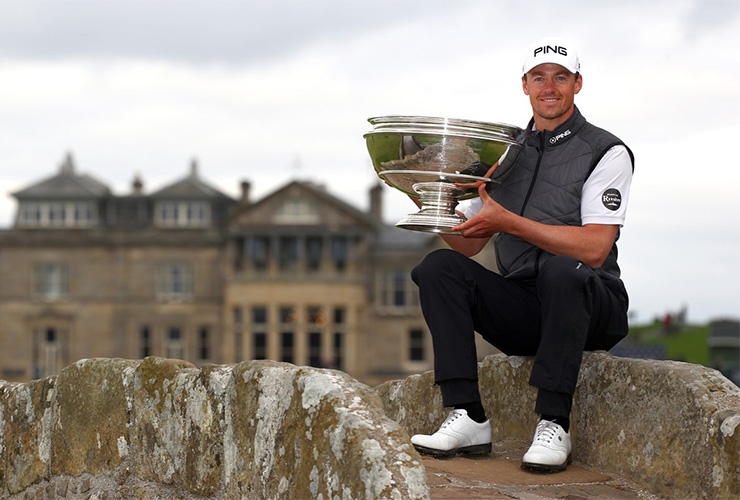 By John Huggan
At No. 40 in the World Rankings, he is Scotland’s highest-ranked golfer. Well, sort of.

When, six months ago, France’s Victor Perez won his maiden European Tour title, the Dunhill Links Championship, over the Old Course at St. Andrews, the 27-year old did so only 14 miles from the home he shares with his girlfriend in Dundee, Caledonia’s fourth-biggest city on the other side of the River Tay. Abigail is a dental student in the “city of discovery,” once known worldwide for its “three Js”—jute, jam and journalism.

Soon enough, Perez followed the victory at golf’s most famous venue with a T-4 finish at the WGC-HSBC Champions in China and a pair of second-place finishes in Turkey and Abu Dhabi.

Such a spectacular run early in the qualifying process means that if the team were announced today, Perez would be a member of the next European Ryder Cup side. Not incidentally, he also would have made his Masters debut last week. All in all, a huge positive, but as things have gone coronavirus pandemic-wise, something of a negative, you might think as well.

Not a bit of it, says Perez. Given that he was in Scotland rather than the United States, it could be easy to imagine that he saw the postponement of the year’s first major as a disappointment. But the opposite is true. The former University of New Mexico psychology major actually views a November Masters as potentially something of a bonus for debutants like himself.

“Like everyone else, I was looking forward to the Masters,” Perez says. “But I’m looking at the postponement in a positive way. With the tournament in November, no one is really going to know what the course and the conditions will be like. We are all going to have the sort of questions that are normally reserved for first-timers like me. The crazier it is going to be, the more it will help me, I think. Guys who have been going there for years will lose a bit of their advantage. They will not be able to prepare in the ways that have worked in the past. It will be like a first-time for everyone.”

That level of positivity is a relatively recent addition to the game of a man who has steadily plotted an upward path through professional golf. Upon leaving the amateur ranks in 2015, Perez played first on the developmental Alps Tour, where his fifth place on the 2016 money list earned him promotion to the European Challenge Tour. Two years and two victories later, Perez’s third place on that money list meant a jump to the European Tour.

“I’ve played quite a few rounds with Victor over the last couple of years,” says Bob MacIntyre, who actually is Scotland’s best-ranked golfer at No. 67. “But there has been quite a change the last few months. His game has definitely gone up a notch. Where he used to hit almost every shot from left-to-right, he now has a much more neutral ball flight, especially on his drives. That has made him more consistent. He is one of those guys whose strength is that he has no obvious weakness. He just does a lot of things right.”

Perez is sprayed with a bottle of champagne by Raphael Jacquelin following his victory in the 2019 Alfred Dunhill Links Championship. (Mark Runnacles)

Still, like most rookies, Perez thought first of consolidation rather than triumph on the world’s second-biggest circuit. But that soon changed not long after Irishman JP Fitzgerald—formerly Rory McIlroy’s long-time caddie began carrying the Frenchman’s bag in Sweden last August.

“The following week we were in Switzerland,” Perez says. “Halfway through the second round, I was right on the cut line. JP says to me, ‘OK, now we have to hit every pin and really push on.’ In the back of my mind I was thinking there was no real need to press that much. I told him we were fine. But afterwards I realized that where he was looking on the board and where I was looking were very different. He was looking at the lead and what we needed to do to get back in the tournament. I was looking at just playing solid, making the cut and hopefully playing well on the weekend.

“That was my mindset, one that is typical for anyone early in their career on tour,” Perez continues. “For nearly everyone it is about keeping your card and making cuts more than thinking about winning. But JP has changed that for me. He has higher ambitions for me and that has allowed me to play up to my potential more often. We won our fourth event together, all because my mindset changed.” 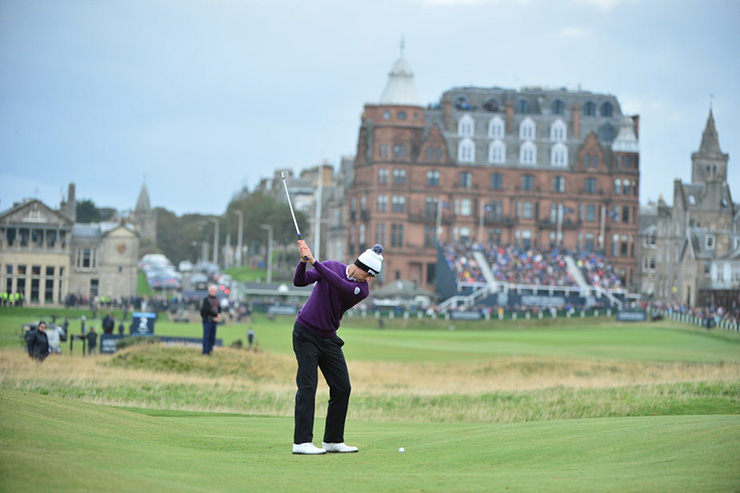 Perez plays his second shot on the 17th hole at St. Andrews during the final round of 2019 Alfred Dunhill Links Championship. (Mark Runnacles)

That wasn’t the first time Perez realized his limitations and acted accordingly. Not long after arriving at college in Albuquerque, N.M., competing in tournaments against the likes of Jordan Spieth and Justin Thomas and many other top-ranked amateurs, he had a similar moment of reflection.

“Playing in the States made a big difference to my game,” says Perez, who represented France in the 2014 World Amateur Team Championship. “The courses were set up so much tougher than I was used to in Europe. Any score around par was nearly always good. That taught me to be patient and to use my mind.

“Jordan and Justin were around, too, as well as a bunch of guys who are now on the PGA Tour. That level of competition on tough courses definitely helped me develop. I certainly knew what I needed to do to get better. Until then, I was basically unaware of what it would take. It was a real eye-opener to play pretty well and finish 20th. That pushed me to get better.”

More recently, Perez has taken advantage of his change of location. A regular at the Ladybank Club in Fife, he has also played the likes of Panmure and Carnoustie “a few times.” The driving ranges at Drumoig and St. Andrews have become perennial haunts, too. Not surprisingly, life in Scotland is good for a golfer.

“The Scottish people have been so welcoming,” he says. “I’ve been able to play so many of the courses in this area and everyone has been so nice. It has been great for my game.”

Proximity to the home of golf has also brought one last benefit. Nearly two weeks, accompanied by his dog, Darcy, and the pin sheet from the Dunhill, Perez enjoyed a nostalgic stroll around the Old Course.

We can’t play, but we can still prepare 📝

I had a fun time today reliving my first @EuropeanTour win while getting ready for the next time we tee it up @TheHomeofGolf 😍 #StaySafe #OneDayAtATime @dunhilllinks pic.twitter.com/7ywHolISGy

“It was a way of being active and a nice reminder of some of the shots I hit last year,” he says. “It was interesting to look at the course with a different perspective. It isn’t often you get to be there when it is totally deserted. There were no flags in the holes and definitely no people. I enjoyed walking the last few holes, remembering the shots I had hit. There were so many good memories and key moments to recall.”

OK, so it wasn’t Augusta National during Masters week. But the Old Course to yourself? Definitely the next best thing.