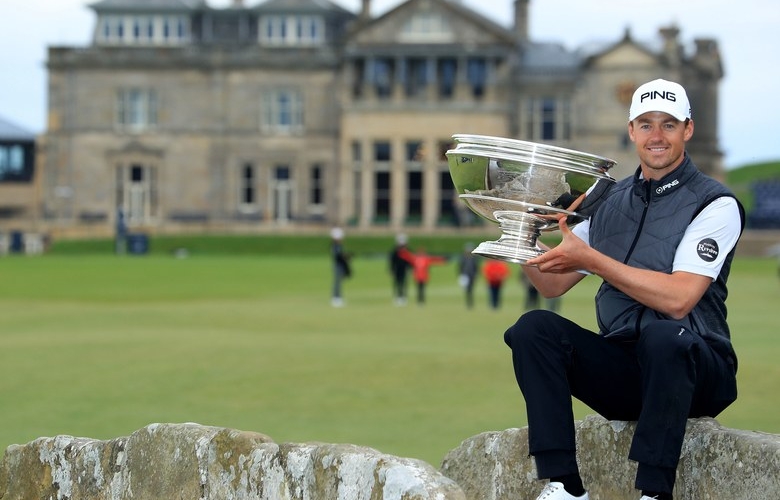 Victor Perez poses with the trophy on the Swilcan Bridge after winning the 2019 Alfred Dunhill Links Championship on the Old Course at St Andrews. (David Cannon/Getty Images)

By John Huggan
The Road Hole. On the Old Course at St. Andrews, winning and losing so often comes down to the penultimate test on golf’s most famous venue. And so it was on Sunday at the Alfred Dunhill Links Championship. Tied standing on the controversial 17th tee—the one on the practice range over the fence from the world’s most-famous course—Matthew Southgate and Victor Perez were finally separated by their play on what is widely regarded as the toughest par 4 on the planet.

Perez hit the fairway, then the elusive green and two-putted for par. Southgate drove too far left into the rough, hit the distant putting surface with his approach but had a long way to the hole, and three-putted. And that, after both made par on the 18th, was the difference between the pair. For the record, Perez was 22-under-par 266 for the 72 holes (36 on the Old Course, 18 on Kingsbarns and 18 on Carnoustie). Southgate was alone in second, one shot back, with Joakim Lagergren of Sweden and Paul Waring of England, tied for third at 20 under in the race for the $800,000 first-place check that will change Perez’s life.

Perez was ranked 184th in the world when he arrived “home” in Scotland (the 27-year-old Frenchman lives in Edinburgh), and neither his professional career nor his recent form gave any hint that this was to be a career-defining week. A steady but unspectacular 76th on the Race to Dubai, Perez had missed six cuts, including his two most recent starts; his best finish of the in his rookie year on the European Tour was a far-off T-3 in Hong Kong, the first event of the 2018-’19 season.

“This was an amazing day, very stressful,” said the new champion. “I didn’t get much sleep last night, and I wasn’t really hungry, either. It was just a battle out there with Matt. Hats off to him. He gave me a hell of a fight. I felt like it could have gone either way. I was fortunate it was my time today. There’s nothing like a win. The confidence you gain from getting it done. It’s so difficult at this level to win. Being my first year [on tour], I’m obviously delighted.”

For Southgate, there was a disappointment, especially as the 30-year-old Englishman, who won the 2010 St. Andrews Links Trophy as an amateur and is a fee-paying member at Carnoustie, has yet to win on the European Tour. Still, this was a big week for a man who came to Scotland ranked 104th on the Race to Dubai and 300th in the world. The $533,330 runner-up check is also the biggest of his career.

“It’s been a horrible season for me, but this has sorted that right out and gotten me right back up there on the Race to Dubai,” he said. “That’s the goal for me, really. I’ve proven to the world this week that when I do switch it on, I can mix it with the best. I’ve beaten a hell of a lot of good players this week.”

Ironically, the competition in the pro-am section of the tournament contained more high-profile names, at least on the professional side. In the end, first place went to Tommy Fleetwood and his partner, Ogden Phipps II. The pair were 39 under par for the 72 holes, a score matched by the McIlroys, Rory and Gerry, the tie broken by Fleetwood’s closing 64 versus Rory’s 67.

All of which seemed rather odd to Rory—“if it had been the lowest team score [on the final day], we would have won it”—but there was more pride in his comments than bitterness. Which was understandable. Rory’s dad, who turns 60 on Oct. 5, played amazingly well off his 3-handicap, shooting three under par on his own ball at Kingsbarns on Friday and “two or three under on the back nine” on the Old Course 24 hours later.

“We came really close,” said Rory, whose aggregate of 15 under par placed him T-26 in the individual event. “We thought we did enough in the end, matching the 39 under. But then we found out that it was the pro’s score on the last day which was the decider, and obviously Tommy had a great round. But we’ve had a really good time. It was such a fun week. And it was great to see my dad play so well. He’s probably a better golfer now than he was 10 years ago.”