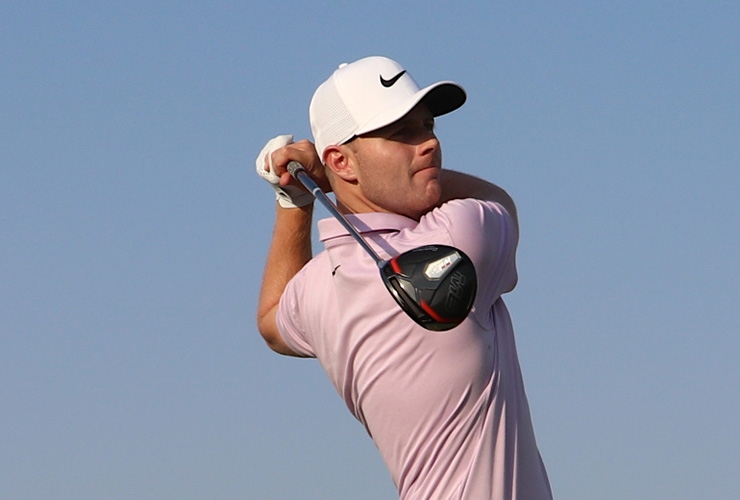 By Kent Gray
Co-leader Harry Ellis described his bogey-free 64 as “nothing special really” while teen Josh Hill, just a shot back after the opening round of the Al Ain Open by Arena, summed up his effort as a “pretty boring round”. Such is the standard on the MENA Tour nowadays.

An eagle on the drivable par-4 4th hole propelled Ellis to his six-under score at Al Ain Equestrian Shooting and Golf Club, a score later matched by Germany’s Constantin Schwierz who mixed seven birdies and a solitary bogey in his 64.

Like Allan, Ellis carried on where he left off at Abu Dhabi a fortnight ago where he finished joint runner-up with countryman Robbie Busher and Swede Niclas Weiland.

The Wentworth Club member turned five-under with the help of the early eagle. His only disappointment, perhaps prompting the “nothing special” comment is that he couldn’t kick on to an even lower score on the par-70 layout.

“The 4th hole really gave a kick start to my round. I hit a three-wood to about eight feet and made the putt. I then picked up three more birdies to go out in 30, but did not give myself too many chances on the back nine,” Ellis said.

“I added one more birdie and did not drop any shots. So, just looking now to take this momentum into tomorrow’s round. Today was solid, but nothing special really. I have been playing well these last few weeks, and when you start shooting in the 60s, it becomes a bit of a habit. I hope it can continue.”

Thank you @theMENATour @HarryEllisGolf for this. You are quite correct we are unique. Fortunate to be working at this wonderful facility @aesgc #alain #golf #equestrian #rugby #cricket #shooting #somethingforeveryone https://t.co/iflaQCWeuW

Schwierz started from the 10th tee and was three-under-par through the turn. A bogey on the second hole was his only hiccup of the day, but he finished strongly with four birdies in five holes from the 4th to the 8th.

Hill, who finished tied sixth in Abu Dhabi, is the reigning Men’s Open champion at Al Ain ESGC and he once again showed his liking for the course with a 65.

“It was a pretty boring round, especially on the back nine. I made a birdie on the par-5 10th, and then played the next seven holes to par. I just kept hitting good shots and two-putted and nothing really happened before a birdie on the 18th,” said the youngest member of England Golf’s U-18 squad.

Issa Abou El Ela, making his first start on the MENA Tour, was one of seven players tied for ninth place at 66 heading into the second round. The Egyptian’s round included an aced on the par-3 15th hole with a pitching wedge from 144 yards.

It was a first hole-in-one in any competition for the 24-year-old and 23rd in the history of the Tour and second of 2019 season following Scot Daniel Kay’s perfect shot in the opening round of the Troon Series – Royal Golf Bahrain Open.

The second round started at 7am UAE time.