The clubs Brooks Koepka used to win the U.S. Open 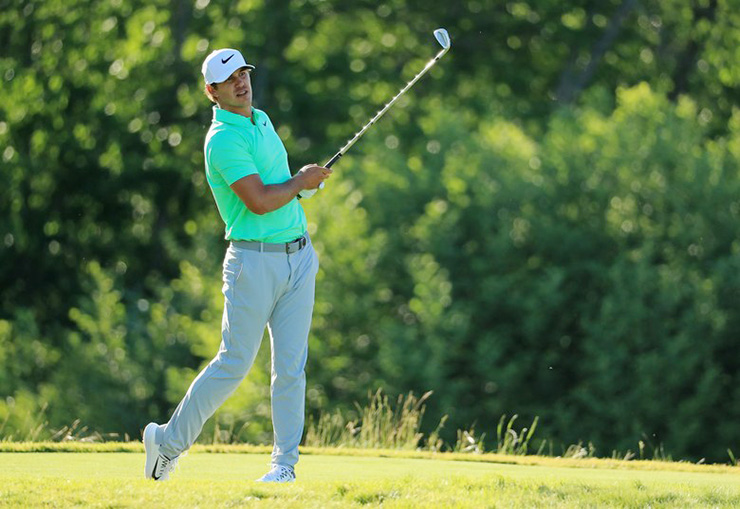 HARTFORD, WI – JUNE 18: Brooks Koepka of the United States plays his shot from the 16th tee during the final round of the 2017 U.S. Open at Erin Hills on June 18, 2017 in Hartford, Wisconsin. (Photo by Richard Heathcote/Getty Images)

Brooks Koepka, the 2017 U.S. Open champion, has had an interesting couple of years equipment-wise. A Titleist staff player, Koepka left the company at the start of the 2016 season for a lucrative deal with Nike. However Nike abandoned the equipment business a little more than seven months later, leaving Koepka with a decision: continue playing Nike or look elsewhere?

Enter Mizuno and TaylorMade. Koepka switched to TaylorMade’s M2 driver last fall and also uses the company’s 2017 version of its M2 3-wood. The Mizuno association, however, is far more intriguing. Although not under contract with Mizuno, Koepka plays the company’s JPX 900 Tour irons. The background on the clubs is that Mizuno, knowing that Koepka’s Titleist contract was up (and pre-Nike deal), made the JPX 900 Tour with Koepka in mind. A different club from the company’s MP line, Mizuno felt he fit the mold of the JPX player. Then, after Nike left the club business, they reached out to Koepka again to gauge his interest in playing the irons and the clubs went in the bag earlier this year after an offseason of testing.

According to Jeff Cook, PGA Tour manager for Mizuno, it wasn’t a hard sell. “As soon as the Nike thing was over I contacted his manager and told him we designed the iron around him and was he open to trying them,” said Cook. “He was, and we got his specs [standard length, half-degree upright] and built him a set. Not much more than that.”

Although some players are loathe to change clubs, Koepka is not one of them. Asked at the time of his Nike deal if he had any reservations about making such a complete overhaul of his bag, Koepka told Golf World, “Those of us on tour are being handed new equipment all the time. Someone has a new driver or a new ball or new wedges they want you to try. People say moving from one company to another is a big transition, but it’s really not because we’re trying new clubs all the time, new shafts all the time. When you have access to all this it’s not a big deal, even when switching brands. At least not for me. After a couple hundred balls I don’t even notice it.”

Clearly. Koepka’s Mizuno irons helped him hit 17 of 18 greens in regulation Sunday, including a pair of shots that led to birdies on Nos. 15 and 16, the former one of the best shots hit on the hole all day that led to a birdie that provided a welcomed cushion.

But perhaps most interesting is that this might be the last tournament the irons are used in. “Brooks reached out to me last week and said he needed a new set,” said Cook. “He practices just with odd-numbered clubs so he wears those out faster and he needed some new irons. The new set isn’t in play yet but it very well might be for his next tournament.

If that’s the case, his irons went out in a true blaze of glory. Here are all of Koepka’s clubs and ball he used at Erin Hills G.C.