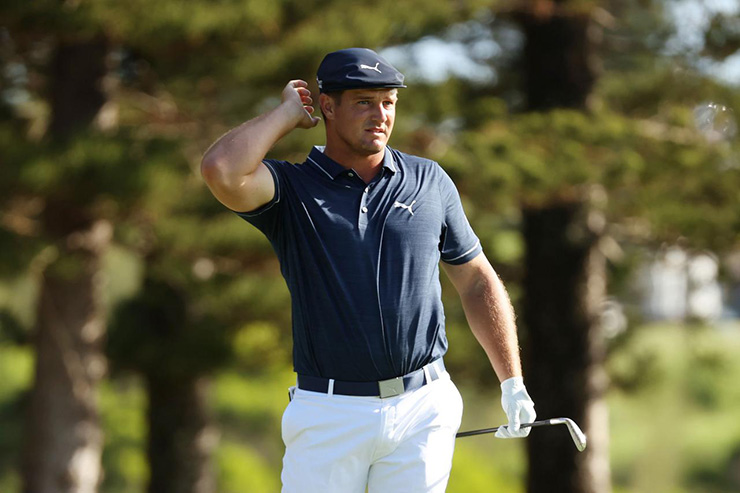 Bryson DeChambeau said he didn’t have any issues with the proposal for shorter driver shafts, even taking some pleasure in his potential influence in the matter. Gregory Shamus

By John Huggan
He said it with a smile, but Bryson De Chambeau felt he was letting everyone down. During a press conference on the eve of his second appearance at the Saudi International, the U.S. Open champion revealed he had “nothing controversial” to say about the prospect of the R&A and USGA introducing equipment changes sometime in the relatively near future.

Which is not to say he had nothing to say. Unlike his fellow Americans, Phil Mickelson and Dustin Johnson, both of whom pleaded ignorance when asked about the same subject, DeChambeau had not only read the release issued by the governing bodies, he had actually spoken to USGA representatives directly. And he was happy with what he heard from John Bodenhamer, Senior Managing Director, Championships, and Jason Gore, Player Relations Director.

“I wanted to talk to them and get their take on it,” said DeChambeau, who is making his second trip to Saudi Arabia. “They are looking at it from a different perspective this time. It’s not just ‘we want to cut distance down.’ That’s not what it’s about. It’s about making sure that we’re playing with the relative integrity of back in the day. People weren’t using 48-inch shafts [in drivers] a long time ago, so they are really trying to make it similar to back in the day while having a modern flair to it. I understand that point of view and I don’t think there’s any harm to it. We’ve all got to play under the rules and do what they say when it comes to legal conformity.”

MORE: USGA/R&A get specific about a distance rollback, but no timeline yet

Indeed, DeChambeau was also at pains to underline his desire to recognize the authority of the rule-makers. He is not a one-man rebellion, quite the contrary.

“I totally understand what they are about,” he said. “They are trying not to take the human element out of it, which I think is the most important factor in this whole conversation. When it comes to the equipment aspect, they are trying to make it more of a fair playing field where you can’t just put a 48-inch driver [in the bag] and one person could gain six, seven miles an hour where somebody else couldn’t … because the driver just doesn’t work for them.

“From my perspective, I think it suits me really well because as of right now, I’m still playing the 45½-inch driver,” DeChambeau continued. “I’m not going to the 48. And now it’s not a possibility for someone else to do that and gain speed pretty quickly. It’s going to be more difficult for people to gain speed easily. They are going to have to work really hard, just like I have. I feel like it’s a pretty good advantage for me, from the way I look at it.”

Indeed, despite his repeated willingness to play by whatever rules the USGA and the R&A come up with, DeChambeau was prepared to concede that equipment manufacturers may not be quite so happy about the future implications of the USGA/R&A statement.

“It’s going to be more difficult for them,” he said. “It’s going to cost them a lot of money to change a lot of the product that they have already put into work. But I don’t know what the future holds. I’m not in position to say other than I don’t think they will be happy about it by any stretch of the imagination.” 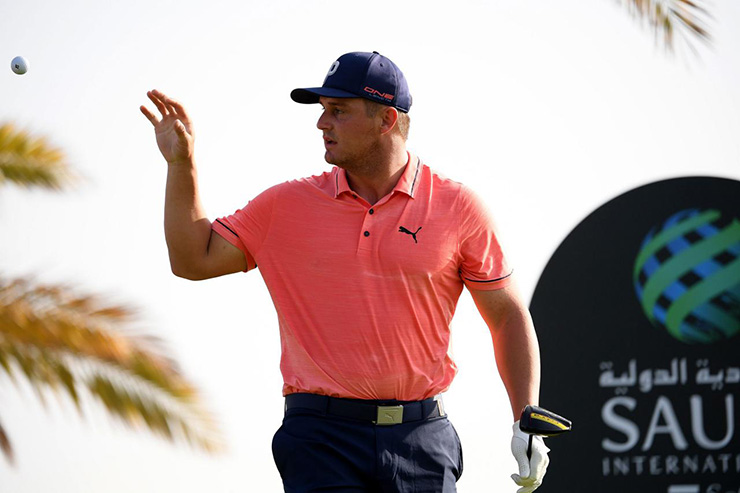 Bryson DeChambeau plays in a pro-am event ahead of this week’s Saudi International. Ross Kinnaird

On the other hand, DeChambeau did express some pleasure over the likelihood that his influence may have “pushed” the authorities a little. Which, he claimed, was not his intent. His aim, as ever, is merely to play his best golf and get the ball in the hole in the least amount of strokes possible.

“I’m going to play with whatever they give me,” he said. “I’m not worried about it. I’m going to do what that they say is legal and I’ll just go from there and find the best way to play for me under the rules of golf. There’s no issues. I’m sure there’s a lot of excitement about me having a potentially controversial thought on it, but I don’t. I think it’s a really cool thought process. It’s a little flattering in a sense, because I did talk about that 48-inch driver for so long. But it just didn’t work for me the way I wanted it to. As it’s played out, I think it’s really cool to see that there is some change off of the conversations that I’ve had.”

Still, there is a limit to what DeChambeau is prepared to put up with. In his mind, a step too far would involve restrictions on “how fast you can swing it,” “what you can practice with,” “how you grip the club,” or “have a certain look to your swing.” Otherwise, he is OK with pretty much anything, even a ban on longer putters.

“Again, I’m going to find the best way to play the game,” he said. “Under the rules right now, you can arm-lock and you can have a long putter that’s off your chest. Whatever way makes you feel comfortable on the greens I think is great for the game. That’s what I look at when I’m thinking about growing the game. You want people to play the game and enjoy the game under the Rules of Golf. You don’t really want to hinder it too much. There’s definitely a balance there.”

MORE: Rory McIlroy sounds off on USGA/R&A: ‘I think this Distance Insights Report has been a huge waste of time and money’

In conclusion, DeChambeau was forced to fend off the inevitable Patrick Reed question in the wake of the controversial drop the former Masters champion took at Torrey Pines last weekend.

“It’s unfortunate that things have happened that way for Patrick,” DeChambeau said. “He’s been a nice guy to me, and I don’t have issues with him at all. Unfortunately there are things that have happened in his life that hasn’t made it look great. We all mess up. I’ve messed up in the past and we’re all human. But we all learn from it. And I hope Patrick learns from it, just like I did with my slow play stuff that went on a couple years ago. I’ve grown a lot from it and I’ll continue to grow, as I’m sure he will.”

Not in every way though. In an attempt to reverse some of his recent physical expansion, DeChambeau has cut down from seven milkshakes a day.

“I’m trying to lean out and retain strength,” he said with a smile. “I’m trying to look better than look a little pudgy. I don’t want to look that way anymore.”

Indeed, as Reed can no doubt confirm, a bad look is never good.