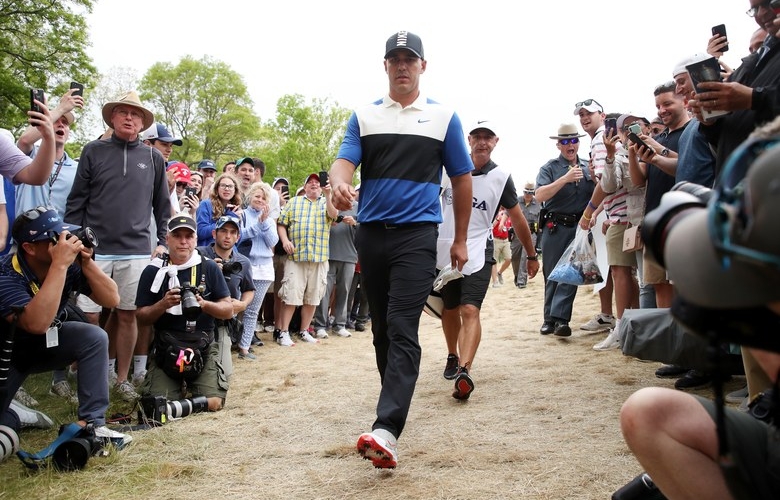 Koepka prepares to play a second shot on the 13th hole from the rough during the final round of the 2019 PGA Championship at the Bethpage Black course on May 19, 2019 in Farmingdale, New York. (Photo by Christian Petersen/PGA of America/PGA of America via Getty Images)


By Christopher Powers
FARMINGDALE, N.Y. — Following Saturday’s third round at the PGA Championship, Brooks Koepka, who had just shot 70 to retain his seven-shot lead, was asked about the fans at Bethpage Black. After all the early week rain, the welcomed spring sun on Long Island—mixed with plenty off adult beverages—made for a raucous scene, one that even included boos for poor putts and off-line shots. Augusta National, this was not, and Koepka took notice.

“I mean, it’s incredible. These fans are very energetic. New York’s always got some of the best fans,” Koepka said. “It’s a true sporting town. It’s fun to play in front of them. I enjoy it. I enjoy hearing the cheers. It’s actually kind of fun hearing some of the boos, too, when you miss a short one, like 9. You pretty much deserve that.

For the most part, on Friday and Saturday, the crowd seemed to be in Koepka’s favour. There were constant shouts of “that’s gucci brah!” a reference to an interview Koepka did with the popular “Pardon My Take” podcast earlier in the week. Not only had the Long Island faithful come around on the 29-year-old, they were actively pulling for him.

That changed dramatically late during Sunday’s final round, when Koepka began to see his large lead slip away and Dustin Johnson began to make a charge. For much of the day, Johnson couldn’t quite close the gap, but he did get to within one stroke at the 15th hole, where he made his fourth birdie of the week on the otherwise stingy par 4 to reach eight under. Back at the par-3 14th, Koepka was busy making his fourth consecutive bogey, dropping him to nine under for the tournament. Suddenly, his seven-shot lead was almost gone.

While all this was going on, chants of “DJ! DJ!” could be heard from the Bethpage gallery. What made it so unusual, though, was the cheers were directed toward Koepka, as if they were actually taunts. They could be heard as Koepka made his way to the 14th tee as well as after he made bogey on the hole. Apparently, these folks have never read Bobby Jones’ famous quote about not applauding or cheering the misfortunes of a player.

Koepka responded by settling in and playing his final four holes in one over, enough to win by two over Johnson, who imploded on the final stretch, making bogeys at 16 and 17 to finish at six under. During those last four holes, Koepka appeared to be locked back in, unlike at 14th, where he sailed the green with an 8-iron and then rushed his chip shot, hitting back over the front side of the green and settling for bogey.

Did the chants of “DJ,” then, actually benefit Koepka? Yes, according to the now four-time major champion.

“I tell you what, the hour spent from No. 11 to 14 was interesting,” said Koepka in his victory press conference. “When they started chanting, ‘DJ’ on 14, it actually kind of helped, to be honest with you. I think it helped me kind of refocus and hit a good one down 15. I think that was probably the best thing that could have happened. It was very, very stressful, the last hour-and-a-half of that round.”

For anyone who wants to call “BS,” Koepka’s not lying. He hit missiles down both the 15th and 16th fairways, then knocked each approach on the green and two-putted for par. At 17, he smartly played his tee shot to the fat side of the green, though he did three-putt to cut his lead, which got back up to three, down to two. His drive at 18 was smoked, but slightly pulled into the fescue surrounding the fairway bunkers down the left side. He safely pitched out, hit his next to inside 10 feet and holed the par putt, letting out what was easily the most emotional fist pump of his career, as if to say “take that.”

To Koepka’s credit, he showed no ill-will toward the fans, instead saying that he had it coming to him.

“It’s New York. What do you expect, when you’re half-choking it away?

“I think I kind of deserved it. You’re going to rattle off four [bogeys] in a row, and it looks like you’re going to lose it. I’ve been to sporting events in New York. I know how it goes.

“Like I said, I think it actually helped. It was at a perfect time because I was just thinking, ‘OK, all right. I’ve got everybody against me. Let’s go.’ I definitely heard the cheers, too. But the chants on 14 green with DJ was when I was kind of in shock. Kind of all that was going on at the same time.”

Despite the fact that the whole place turned on him, Koepka can’t wait to return for the 2024 Ryder Cup, provided he makes the team. Something tells us he has an outside chance to do so.

“We’ve actually talked about this a lot during the week,” Koepka said. “Good luck to Europe with the fans. I can’t wait to play it. I hope I’m on the team. If not, I just want to be here. It’s going to be very special. It’s going to be a lot of fun. I can’t wait to play it. I’m excited already thinking about it. This is one hell of a place to play Ryder Cup.”